Well, it might not have been the most romantic Valentine’s Day activity, but last weekend’s chess tournament did go well for the Morefields.  Scott won four out of four games to take home the 1st place trophy in the K-5 section.  Going into tournament weekend, he was glum and bored at the very notion, convinced he wouldn’t do well and hoping that the Pinewood Derby would be scheduled for the same day, so he could opt out entirely.  Once it was all over, though, he was fired up, dancing around and making plans for the Va Scholastic Tournament next month. 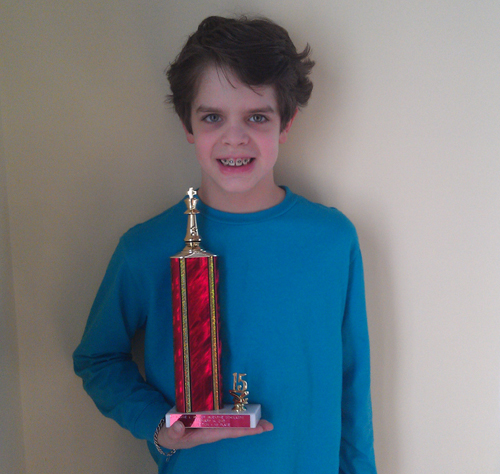 Jason opted out of the competition, but was on hand to cheer on his students from Heartwood Grove School, whose newly formed chess team finished their first-ever tournament in second place in the K-3 section, just a half-point away from top honors.  If anything, I think that made Jason more excited and proud than any of his personal wins.

Gracie soldiered on through another tournament with no wins, but a great attitude.

Granny and Grandaddy came over for dinner to wrap up a great Valentine’s Day.  Now it’s just a matter of surviving a possible Snowmageddon this week, and then Jason and I will be off to Camp Pendleton in Va Beach, and the Oceana Naval base for a weekend outing with the Boy Scouts.