Once upon a time in an age before graphical browsers, we early web users used to gather via something called usenet, which offered discussion boards tailored to every hobby, sport, fetish and perversion you could imagine (and a few maybe you couldn’t). As soon as I learned there was such a thing, I looked for a place to talk about 007, and found alt.fan.james-bond. 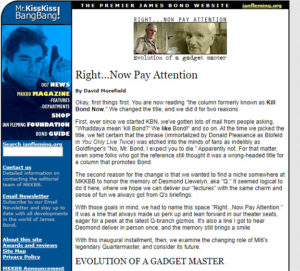 In this magical place, I met fans from around the world, of all backgrounds and ages, all united in our affection for the adventures of the world’s greatest superspy. Among the cyber-friends I acquired then was a young fellow named Panos Sambrakos, who eventually approached me with the idea of building the worlds’ greatest James Bond fanpage. And so we did.

Well, okay, mostly he did, being being equally gifted at design and promotion (two talents that have since taken him to the top of the advertising world), but he leaned on me for written content, and with a tendency to rattle on at the keyboard anyway, it was a good fit. The resulting site was dubbed “Mr Kiss Kiss Bang Bang”, or MKKBB for short, and it soon found an audience. Eventually we took on a talented writer and co-editor in the person of Deane Barker, and then merged with a popular Bond news site called “007 News” and in its owner gained a fourth editor, James Rumley. Or maybe I got the sequence on those last two developments backward; it was a long time ago.

Anyway, we had a lot of fun, won a bunch of awards and basically worked ourselves silly producing content week after week, until finally we all burned out. The site folded and we all moved on to other things: marriages, kids, careers.

Recently I came across some of the old articles I wrote for the site and figured they deserved to be rescued from the dustbin of history, so I’ve stored them here in their own little corner of this site.

Here you can read my essay on Bond And The Pulps, probably my most celebrated article at MKKBB as it was linked from many other sites and reprinted in the magazine UK Thriller, before leading to a commissioned “follow up” (non-Bond) piece on the pulps for Razor magazine.

With James Bond As Mr. Know-It-All, I indulged another pet subject of mine; the many curious evolutions of the Bond character over time, and the conviction that they were often as not random and unplanned. Somehow over time, Bond developed from a fairly smart guy to a super-genius, and back again. I figured it was worth speculating why.

Along the same lines, Continuity In the Bond Films examined the ways the Bond movies were connected — or more often NOT connected — over the years. It’s interesting to read this piece now given how the series’ approach to continuity — along with so many other things — has undergone such drastic changes in the era of Daniel Craig. All the Craig films have maintained an almost slavish continuity, essentially telling one, continuous 15-year story. It’d be worth doing a follow-up article to ruminate on which approach is more problematic.

Similarly, it’s interesting read the piece I called Taking It Personally, observing (and in a barely veiled fashion, complaining) how several films in a row had chosen to jettison Bond’s previously character-defining trait of dispassionate professionalism to instead embroil him in storylines involving personal betrayals, tragedies and vendettas. I say “interesting” because twenty years later, the trend continues with no sign of stopping, so that by now there are almost as many films with a “this time it’s personal” angle as not.

And just for fun I threw in pieces on Bond’s outlook on love and romance, the changing role of Q in the series, a look at how the films celebrate cleverness over genius, and a fairly daft “explanation” of why Bond is occasionally threatened with replacement by the mysterious 008.