I was upset this week to learn of the death of Robert Culp, one of my favorite TV actors.  I probably first encountered him on “Columbo,” being one of a handful of actors whose strong performances kept him coming back again and again to match wits with Peter Falk as a series of brilliant — but ultimately overconfident — killers.

It wasn’t until “The Greatest American Hero,” however, that I became a fan, thanks to Culp’s terrific turn as FBI agent Bill Maxwell, the crusty, Conservative, Commie-hating  crimebuster who took schoolteacher Ralph Hinkley under his wing and tried to turn him into his own secret weapon against the underworld.  With his cocky swagger and biting sarcasm, Maxwell seemed to reflect Culp’s own persona to a degree, and he quickly evolved into one of those supporting characters who ends up stealing the show.  Later I made it a point to seek out “I Spy,” the show he’ll probably be best remembered for thanks to its cultural significance in the context of race relations (okay, and for being a good show).

Anyway, Culp’s death comes just a week or so after that of Peter Graves, who I grew up watching on “Mission: Impossible” as the unflappable “born leader” prototype Jim Phelps.  With his prematurely white hair, solid jaw and squinty eyes (not to mention that amazing, authoritative voice), Graves exemplified for me the old-school hero type who seem to have vanished from the cultural scene in recent years; what for lack of a better term I’ll call “The Grown-Up.” 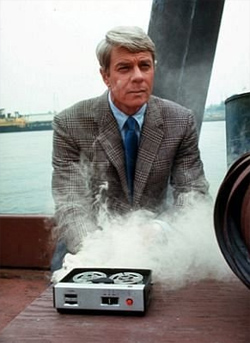 Maybe it’s just me, but it seems that movie and TV heroes used to have a certain gravitas to them born of maturity.  They were psychologically stable, morally centered and utterly capable.  As characters, there was usually some mystery to their past, but you could intuit (and were sometimes told) that they had a past in the military (usually the Korean War), that they had worked their way up the ladder as beat cops or foot soldiers, that there were adventures and romances and tragedies in their earlier years that made them into the men they were.  Through force of personality as much as any conferred rank, they were leaders of men, commanding the respect of those under them.  They were grown-ups.

We used to like our heroes to be grown up.  I remember reading about how Jeffrey Hunter landed the role of Christ in the big-budget epic “King of Kings,” only to have certain critics, noting Hunter’s baby face, rename the flic “I Was A Teenage Jesus.”  It was a liability then to look too young, but now of course the reverse is true.  The perfect age in Hollywood now is around 20, it seems, and the longer you can sustain that look, the longer you’re going to work.

Mission: Impossible is a good example.  For the DePalma film in the 90s, Jim Phelps is marginalized (and ultimately, disgracefully, villainized) in favor of his youthful protege Ethan Hunt, played by that perpetual teenager Tom Cruise.  In the early scenes of the film, Hunt’s teammates are wiped out, but not before we see they’re all kids like Cruise (Emilio Estevez was in there and I forget who else), making the Impossible Mission Force look more like the Breakfast Club.

Star Trek is another example.  In the original show, James T. Kirk was already the youngest man to captain a starship at 34 years of age, but in modern terms that would make him a comparative Methuselah, so he’s re-imagined as a boy wonder who earns the center seat in his mid-20s, essentially as a graduation present for making it through the Academy.  In the 60’s, there was that effort to balance the desire for a youthful, handsome leading man with the need to give him some gravitas; Kirk had served in Starfleet for at least eleven years already working up the ranks, and along the way earned an impressive collection of citations and medals.  For today’s crowd, however, all that matters is youth and talent; start citing your past accomplishments and people will eye you suspiciously as they calculate how many years you must have behind you.

Maybe this is just another grumpy old man rant, but I do wonder what kids today find admirable in their fictional heroes.  For me — and I don’t think I was alone — a big part of it was that air of maturity.  Guys like Kirk and Phelps and yes, even Bill Maxwell in his way…guys like Steve McGarrett and Steve Austin were men, not boys.  They bore the weight of responsibility, they were confident in their beliefs, they saw their duty and did it.   I always figured that’s what happened when you grew up; you turned into a guy like that.

Now of course I look back on those same performances and think, “He’s younger there than I am now!” …and yet I still think they’re grown up and I’m not.  So it’s not just a question of age.  Personality, then?  Just individual charisma?  Or is that no one is really that grown up, ever, but some guys are better at faking it?

At any rate, it’s disturbing to reach an age where your childhood heroes start dropping like flies, not due to excess and folly like Errol Flynn, or tragic violence like George Reeves, but to the one foe no one can beat; time itself.  It’s kind of depressing to realize all your old heroes are of an age where they’ll be checking out sooner than later.  Just from a narcissistic point of view, it forces you to realize you’re getting on yourself.