At the Movies with Captain America 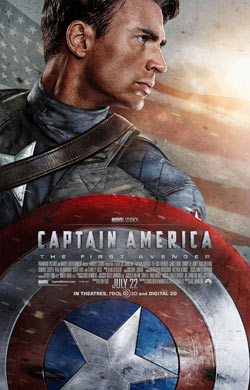 I don’t get out to the movies very often these days.  Partly that’s thanks to the logistics involved in finding a sitter for the kids, but mostly it’s due to my own indifference.  Going to the theater is frankly a drag at this point, what with 20-minute commercial “pre-shows” advertising everything from TV shows (?) to body spray (???), “digital sound” that mostly amounts to just more volume, fellow audience members who never learned how to behave in public and of course ticket prices that are flat-out ridiculous.  I don’t even have a tricked-out “home theater” and it’s still more satisfying for me to keep up via NetFlix than to go to the theater.  Factor in all the people who DO have home theaters with big screens and surround sound and so on, and it’s a wonder they sell any tickets at all.

But that’s another rant (or three).  The point is, Laura and I did get out to see Captain America: The First Avenger last week and I loved it.  First of all, it was terrifically cast; I’ve heard arguments for and against Chris Evans’ performance, but I thought he was great.  I love what Robert Downey, Jr does in the Iron Man films, but if you think about it, it’s got be a lot harder to pull off “earnest virtue” than it is to do “cocky irreverence.”  Evans manages to portray old-school, nice guy heroism here without looking like a schmuck, or wooden, which is getting to be a lost art.  Hayley Atwell is wonderful as Peggy Carter and looks very much like a film star of the story’s 1940s setting.  Certainly she’s more endearing and fully realized than Natalie Portman’s Jane Foster character from Thor.  Tommy Lee Jones is predictably great, if shockingly old-looking, and Hugo Weaving makes a perfect Red Skull.

The film looks amazing; despite all the sci-fi elements, the technology looks like it belongs in the 40s, or at least in a 40s sci-fi film.  There’s a control room central to Cap’s origin that’s huge and impressive and full of gee-gaws, but when you get up close, it’s all old-school dials and toggles and levers, which is awesome.  I’m so over touch-panels and holographic “head-up” displays: bring back the low-tech hi-tech!  Also the lighting and cinematography all look appropriate to the era, which is probably a big reason they picked director Joe Johnston, who’s been here before with The Rocketeer (another favorite of mine). 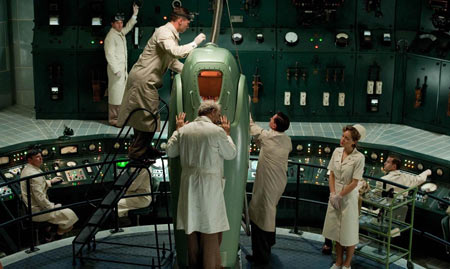 There’s tons of Easter eggs for comic fans, but if you’re not one, they don’t get in the way at all.  All in all, it’s easily the best superhero film I’ve seen since the first Iron Man, but honestly I’m not sure I’ll enjoy any sequels as much if they’re set in the present day.

I’ve noticed I tend to like movies based on Marvel characters more than the ones based on DC heroes, and that’s not just because they’re technically better films (though they are).  It’s also because I don’t have much of an emotional investment in the characters.  I know who the Marvel guys are, and have an idea of their histories in broad strokes, but I’m not so mired in the minutea of their continuities that I get bent out of shape when the movies take liberties.  I knew, for instance, that the first X-Men film mixed and matched team members from various time periods, and that Mary Jane Watson was not Peter Parker’s first great love, but so what?  On the other hand, even at 14 I couldn’t get past the “crystal cathedral” Fortress of Solitude in the Superman films, or the fact that Jor-El was a white-haired, chubby AARP candidate.

Out of the Marvel roster of heroes, Captain America has always been near the top of my list, just by virtue of being closer to the traditional “hero” ideal than the average conflicted, neurotic Marvel protagonist, and that element is certainly played up in the new film.  In fact, I’ve seen it treated as a handicap by some reviewers, who say Cap is the “dullest” and “least psychologically complex” of Marvel’s characters.  One man’s meat is another man’s poison, I guess.  The thing is Cap’s the reverse of the standard Marvel hero.  Most of them are guys who gain powers first and learn to be heroes only afterwards; Spider-Man to atone for a colossal failure of character and the tragedy that results, Tony Stark (at least in the movies) to at last do something positive with a life up til now wasted on hedonism and debauchery.  Even Thor is an overgrown  kid who has to be taught a lesson in humility by his pop.  Steve Rogers is the opposite; on the inside, he’s a hero from the start; he just lacks the power to do anything about it.  The Super Soldier Serum enables his heroism, but it doesn’t create it.  The film understands all this and gets it dead right, in my book.   Stanley Tucchi’s Dr Erskine character explains the formula only magnifies a person’s true nature; it can make a good man great, but it would make a bad one only worse.

The only real negative for me is that annoying subtitle, “The First Avenger.”  I gather there are at least three reasons for its use.  First is doubtless to differentiate this film from the “Captain America” film made in 1990, a film so infamously awful it went straight to video and is still held up as a sort of “Heaven’s Gate” of superhero flics.  The second reason is to allow the character’s name to be dropped from the title entirely in countries where “America” is a bad word (like we care; they’re all run by Red Skulls anyway).  But the biggest reason is to hype the movie everyone seems really focused on, 2012’s The Avengers.

In fact, for all intents and purposes, that one appears the ONLY big movie from Marvel’s standpoint, with the Hulk, Cap, Iron Man and Thor franchises merely lead-in’s to what’s being hyped as the greatest cinematic triumph since Edison invented the motion picture. This grates on me for lots of reasons; for one thing, it seems like the ultimate surrender of artistic integrity to treat an entire film as a two-hour commercial for another film.  It a tacit admission that the bean-counters have finally and completely won out over the artists. (Apparently it’s precisely this issue that led Jon Favreau to abandon the Iron Man franchise).  But it also seems like a stupid game plan, telling people, in essence, “Come see the movie that’s out now if you want, but let’s face it, the one that’s really worth watching won’t come out ’til 2012.”  I mean, would it make sense to say, “Come get our new double-cheeseburger.  It’s not nearly as awesome as the one we’re bringing out next summer, but hey, you’ve got to eat something in the meantime, right?”

Of course if The Avengers does turn out to be fantastic, everyone’s happy.  But if it stinks, Marvel’s going to have a lot of very disappointed fanboys out there, considering the marketing campaign’s been rolling along for like six years now.  And let’s face it, so far the model has been that the more super-powered characters you cram into a film, the more it stinks, as borne out by the Batman and Spider-Man franchises.  The Avengers will have, what, six super-beings just on the side of the good guys, let alone whatever villains they toss in.  If they can cram all that into two hours and make it work, I’ll be impressed, but I’m doubtful.

With Captain America, though, even Marvel’s “this is a shared universe, so get used to it” attitude isn’t too grating as most of the film happens 70 years in the past, so I only have to put up with the obligatory cameo by Sam Jackson as Nick Fury at the very end of the film, plus a few in-joke references to other characters and themes that don’t get too intrusive.

As always, your mileage may vary, but I got the same feeling from watching this film that I imagine Cap’s legions of young fans had reading Joe Simon and Jack Kirby’s comics in the 1940s.  In fact, if they still offered “Sentinel of Liberty” pins, I’d order one right now.

6 thoughts on “At the Movies with Captain America”