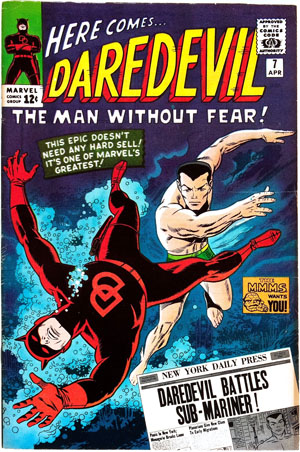 Fifty years ago this month, fans of Marvel Comics’ Daredevil (assuming there were any) found a surprise on the cover of issue #7: a whole new look for the world’s greatest blind superhero courtesy of artist Wally Wood.

Daredevil had been launched the year before in a fairly obvious attempt to duplicate the huge success of The Amazing Spider-Man, and indeed the new book was kind of, sort of like the one headlined by the celebrated wall-crawler, only without the cool costume, memorable villains, exciting artwork, interesting plots, sense of humor or general spirit of innovation.  It was, in a nutshell, a sorry mess of a comic that hobbled along for four uninspired issues before the reigns were handed to plotter/artist Wally Wood, a terrifically talented veteran of EC Comics and past collaborator with Jack Kirby on DC’s “Challengers of the Unknown” and the “Sky Masters” newspaper strip.

For his first two issues, Wood did what he could with Daredevil’s original costume, which, like the rest of the feature, was a half-hearted affair; yellow tights with black trunks, boots and gloves and up top — just to ruin anything close to a clean design — a black wife-beater emblazoned with a capital letter “D.”  You know, for “Daredevil.”  A devil’s-head or some other demonic symbol would’ve been more eye-catching, but in 1964 maybe it would have also been controversial.  Anyway, a pair of horns on Daredevil’s yellow cowl were a nod to the “devil” angle.  The eyeholes, meanwhile, were solid black, threatening to ruin the one thing DD did have going for him; a rock-solid secret ID as a blind attorney.

Yellow isn’t often chosen as the predominant hue for superhero costumes, and this one showed why.  Indeed, in Daredevil’s case it makes no sense on any level.  It isn’t a color anyone really associates with “devils” and considering the character is billed as “The Man Without Fear,” it seems totally counter-intuitive to dress him in the one color that’s synonymous with cowardice.  However, in a way the outfit did make sense in that you could easily believe a blind man put it together. 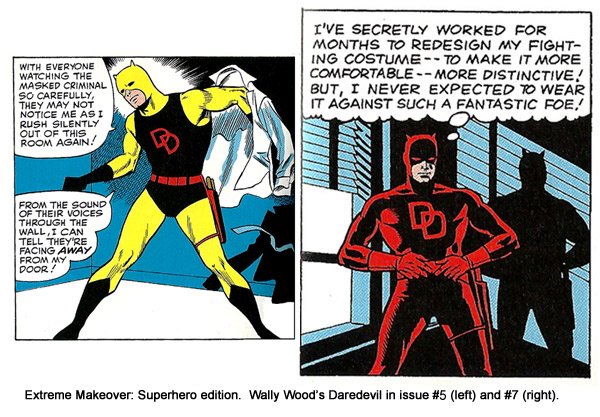 Upon his arrival with issue #5, Wood immediately began tweaking the costume, rounding off the gloves and the wife-beater’s collar and changing the chest emblem to a pair of interlocking D’s.  With issue #7 he went whole hog and gave Matt Murdock the first real break he’d ever had, streamlining the entire outfit in head-to-toe crimson, removing the extra lines created by the old trunks and tank top and creating a sleek new form that finally reflected the nimble, gymnastic nature of the character while also providing the vaguely satanic connotations his name had always suggested.

I don’t want to give the impression that an attractive costume is all it takes to make a character work, or indeed that the only thing wrong with Daredevil up til now had been the artwork.  But with Wood at the art board, things finally began to fall into place; Matt Murdock and his love interest Karen Page looked glamorous and elegant, people began moving naturally, even gracefully, and places and objects became more solid and real.

Just to give an indication of how dire things had been, consider this pre-Wood sequence from Daredevil #2, wherein our hero takes on a ring of car thieves with a…well, let’s say unique battle plan.

That’s right, with a truck bearing down on him at top speed, Daredevil somehow stretches a tire around a car engine, lifts said engine, lies down with the engine on his chest and uses the tire like a giant rubber band to launch the engine at the truck. Keep in mind Daredevil’s only super-powers are a heightened sense of smell, hearing, taste and touch and a “radar sense” that lets him detect objects around him in much the way a bat uses its “sonar.”  There are never any claims he has super-strength, but even if he did, this maneuver is strictly the stuff of Bugs Bunny cartoons.   If an eight-year-old included this sequence in a homemade comic, it’d be cute, but here it’s just pathetic (besides, what 8-year-old would draw that poorly?)

Admittedly, things weren’t always THAT bad, but this sequence symbolizes the lack of attention or effort given to these early issues.  The general impression is that Daredevil’s being ignored in favor of big guns like The Fantastic Four and Spider-Man; his creative team seems to be just churning out a by-the-numbers comic without any emotional or mental involvement whatever, sometimes apparently not even sure which character they’re working on and what exactly he can and can’t do. Once Wood arrives, the dramatic improvement in art alone reassures us that finally someone actually cares.

So anyway, after two issues of fighting forgettable menaces like The Matador and Mr Fear, things are ramped up considerably in Issue 7 with the arrival of Prince Namor, aka the Sub-Mariner.  Aside from a comedic cameo by the Fantastic Four in issue 3, this is the closest thing to an “A-Lister” we’ve seen in these pages yet.

In one of those kooky plot points typical of early Marvel, Namor’s decided that before simply taking over the surface world by force, he’ll try filing a legal claim, suing the entire human race.  So he picks a law firm at random and ends up, naturally, at the offices of Nelson and Murdock.  Matt and Foggy try to explain to Namor the impossibility of his plan, so Namor decides there’s one sure way to have his day in court: trash the city until he’s arrested and brought before a judge.  Daredevil tries to stop him, but Round 1 does not go well, and it’s only through the good sportsmanship of Namor that our hero avoids death by drowning. 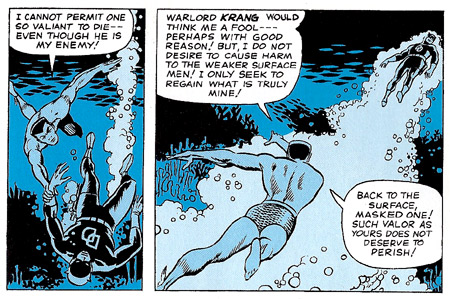 Namor does get his day in court, but the wheels of justice grind slowly and the Atlantean prince isn’t famous for his patience.  Soon enough he escapes court custody and gets back to his campaign of mayhem, and the U.S. Army is mobilized to battle him on the streets of New York.  Knowing such a conflict could lay waste to much of the city and lead to untold casualties, Daredevil convinces the troops to give him a chance to stop Namor first.  And so the decidedly lopsided contest resumes for a couple more rounds, with Daredevil using brainwork and acrobatic skills to avoid being demolished by Namor’s superior strength, while employing any weapon at hand (including a fleet of construction vehicles and heavy machinery) to deliver blows which Namor shrugs off with ease.  At one point, DD lassoes Namor but gets more than he bargained for when the Sub-Mariner takes flight, leading to this interesting tactic that brings him back down to Earth. 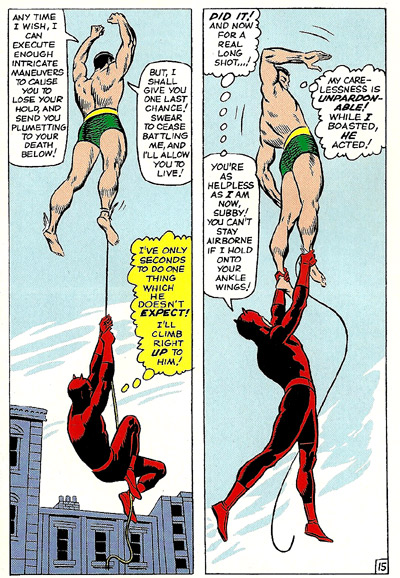 This was where I first learned that those little ankle wings were what gave Namor the power of flight.  It’s one of those examples of kooky Golden Age “logic” they usually tried to avoid mentioning in the Marvel Age.  Anyway, as the fight goes on longer than Namor ever imagined possible, he alternates between angry irritation and a growing, grudging respect for this hopelessly outclassed opponent who nonetheless just refuses to give up.  When Daredevil tries one last desperate gambit, jolting Namor with live electrical wires from a broken lamppost, the Sub-Mariner is only briefly dazed, but DD goes down for the count. 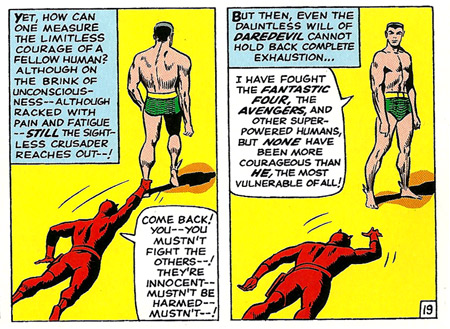 Finally, out of respect for his opponent’s valor, Namor avoids further conflict with the surface world’s military forces and returns to Atlantis, putting off his vengeance for another day.

One of the cool things about Marvel heroes is that they were allowed to lose from time to time, and in my opinion it never worked better than it does here.  Daredevil never has a chance against an opponent of Namor’s might, but that doesn’t stop him from giving everything he has.  Finally we’re getting something to hang our hats on, some indication of what it is that makes Daredevil special.  Up ’til now, he’s been doing pretty much what any non-powered hero could do (except for that bit with the engine) and the only “hook” has the “irony” angle: “I wonder what they’d say if they knew a blind man was doing this!”  Now we see that what defines Daredevil is his indomitable will, his refusal to ever give up.  Being the “Man Without Fear” doesn’t mean he’s never scared, it means he never lets his fear stop him from doing what he knows must be done. It’s a trait he’ll call upon frequently as he pursues a career as an essentially non-powered player in a game made for supermen, gods and monsters.   Here, Daredevil’s “mere mortal” status is what brings him (very painful) “victory”: if he’d had super-strength or other powers, the fight would’ve dragged on and torn up the city and the outcome still would have been in doubt.  As it stands, he takes one for the team (or the city, anyway), and finds the one way to make Namor stand down.

This brings up another neat angle of the Marvel Age:  if you substituted any two other characters in this scenario, it might have all played out very differently, but Daredevil and the Sub-Mariner have very distinct personalities that drive the story in the direction it’s meant to go:  Matt Murdock is a man of courage and will, and Namor is a man of nobility and honor, and mixed together this is what results.  By accenting the clash of wills and personalities rather than muscles and powers, the story is elevated to something more interesting than a comparatively “even” match between Namor and, say, the Hulk.  For Marvel, the problem has always been “how do we find a way to pit two heroes against each other without one of them ending up the loser?”  This story remains their most elegant solution to that quandry: Daredevil wins by losing.

Which is not to say that everything is honkey-dorey from here on in.  The next issue brings us another D-List villain, the infamous Stiltman, then we get a two-parter with the combined “might” of Ape Man, Cat Man, Bird Man and Frog Man (!) and then Wood is gone.  The art will reach a few more high points later at the hands of John Romita and Gene Colan, but the stories will rarely be any great shakes, and for the most part DD will labor on as a mediocre also-ran until Frank Miller shows up in the early 80s, bringing a mix of Eisner-esque storytelling techniques, Mickey Spillane toughness and kung-fu, ninja hi-jinks to finally elevate our hero into the big leagues.  Still, it’s hard to imagine our boy Matt lasting that long without the boost he got from Wally Wood at this crucial, early stage.