Shipping Out (for the Weekend)

Jason and I had an adventure this past weekend as BSA Troop 800 made a weekend outing to Camp Pendleton in Virginia Beach.  Among the highlights was a day trip to the Norfolk Navy base for a guided tour of the aircraft carrier USS Theodore Roosevelt.  It’s hard to say what left a bigger impression: how immense the ship seems on the outside, or how close and tight it feels on much of the inside.  Except for the hangar deck, where we entered, much of the vessel is tight quarters, indeed. 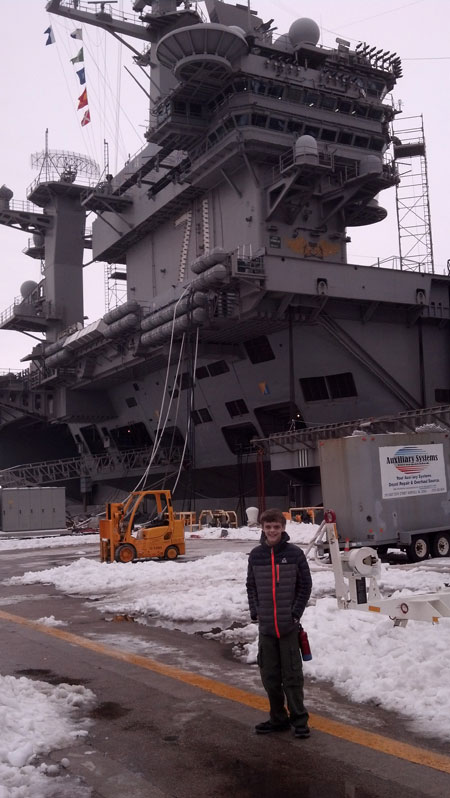 That row of windows towering above Jason is roughly ten stories up; on the other side of them is the ship’s bridge.  A little while before this picture was taken, we were on the other side of the windows looking out, and Jason got to sit in the Commanding Officer’s chair, if only briefly.  One neat and unexpected attraction was a small museum showcasing artifacts and personal items from the life and career of Teddy Roosevelt.

Other trips over the weekend included visits to the Douglas MacArthur Memorial in Norfolk and the Mariner’s Museum in Newport News, as well as numerous shorter “trips” on the ice at Camp Pendleton; the base was covered with about 4 inches of snow, which in turn was topped with a layer of ice at least an inch thick.  Still, hanging out in a heated barracks with real beds beats sleeping on the ground in a tent any day, especially if that day is in late February.

I gather the Roosevelt will soon be leaving Norfolk for the Mediterranean, after which it will return to its new home port of San Diego, so I’m glad we got to visit while it was still here.  To the men and women of the Roosevelt, thanks for your service and your hospitality.  Jason and I wish you smooth sailing.