If you know me at all, you know I’m a big Paul McCartney fan. If you follow the news at all, you’ve probably noticed Sir Paul’s upset a lot of fans (mostly on the Right) with a remark he made in Washington last week. To complete the picture, I’ll let you in on the well-guarded secret that I tend to lean conservative. 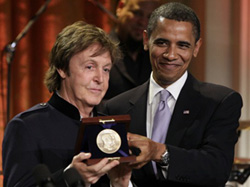 For the benefit of those who came in late (as they used to say in the Phantom strip), Sir Paul became the third recipient of the Library of Congress Gershwin Prize for Popular Song in a ceremony held at the White House, where he apparently spent the evening gushing over how Fab that dwelling’s current occupant is, before taking an out-of-left-field swipe at his predecessor: “After the last 8 years, it’s great to have a President who knows what a library is.”

What followed was a firestorm (well in some circles, anyway) of controversy that if nothing else proved people do care after all about the opinion of an aging rocker whose most famous gig is 40 years behind him. On that level, you might even see this as a triumph for Sir Paul, who at 67 still has his love life chronicled in nauseating detail by tabloids that usually treat celebs as “over the hill” at 25, and whose tours continue to pull in more money than contemporary acts a third his age. The only thing missing from the “I’m Still Relevant” trifecta was the ability to stir controversy, and now he’s achieved that. You go, Paul. (One can easily picture the fuming ghost of John Lennon, irked that Paul has once again achieved with ease — even by accident — what he had to bust his hump to pull off).

Because the world is dying to know, I figure I’ll share my opinion here. I believe Paul’s remark was unfortunate for the simple reason that it marred one of those rarest of Washington events; a social event divorced from politics. It was, on paper anyway, a celebration of great music (which in Paul’s case is almost always apolitical music), with performances by a host of super-talented performers and, we can assume, representatives of all parties in attendance. If any other attendee had taken the mic to insult a political figure –on either side — in that setting, we’d have called him a churlish boor, so it’s kind of disingenuous not to apply the same standard to Sir Paul, even if he was the Man of the Hour.

Paul is welcome to say whatever he wants at his own shindig, obviously, but he should be mindful we’ve entered the Age of the Sound Bite, where anything you say can and will be used against you by a media that will happily take one line and blow it into a federal case. Since the clip of Paul’s remark is all most of have seen of the event — and will remain so until PBS airs its recording of the whole thing (and it’ll be interesting to see if they leave the line in), the impression is that it was a DNC fundraiser, a partisan gathering, “The Bush-Basher’s Ball 2010.” Which of course it wasn’t…on paper…and in creating that perception, Paul’s only undermined the stature of the honor, and thus his legacy, which is one thing just about everyone can agree he’s desperately interested in promoting. “Gershwin-level songwriter” looks impressive in the history books; “Favorite songwriter among persons of like-minded political leanings” not so much.

If nothing else, this affair provides an interesting study into the nature of celebrity, and popularity. Fans seem to project all sorts of qualities onto the Beatles, making them whatever they want them to be. Paul in particular has been seen as harmless, the cute one, the one who wrote silly love songs. If some people wrote him off as an intellectual lightweight, a cornball crooner, the flip side was that he at least wasn’t threatening. It was the other one who made the “bigger than Jesus” gaffe, protested the war, got on Nixon’s watch list. Paul we could like regardless of how we voted, or where we stood on the war(s), or whatever. Until now. Funny how little it takes to end the Honeymoon. Lennon wrote protest songs, paid for billboards protesting the Vietnam conflict, made all sorts of waves. Paul made a throwaway remark so toothless and limp even Jay Leno would’ve passed on it, and yet, coming from The Cute One, that’s enough to end the party.

As non-constructive and irrational as some of the criticisms have been (“What does he know? He smokes pot.” “If he’s so smart, why’d he marry a gold-digger?”) the defenses have been equally off-point. As a card-carrying Paulite, I’ve visited his site’s message boards a couple times to see the reaction, and it usually comes down to “Good for him for stating the truth”, “It’s a free country, he can say what he wants” and “I applaud his courage.” Regarding the “truth” defense, of course it’s not true that Bush doesn’t know what a library is, since (1) his wife’s a librarian (2) he was the first CIC to give out this award from the Library of Congress and (3) well, he had to have gotten “My Pet Goat” from somewhere, right? As for the “he can say what he wants” defense, I’m not about to argue he can’t, but there’s a time and place for everything. For instance, I may think Salma Hayek is smoking hot, but I probably don’t want to announce it in the middle of a church service.

The funniest, though, is the suggestion that Paul has somehow struck a bold blow for the Left out of personal courage. This we can rule out for the simple reason that he knew he was delivering his line to a sympathetic audience. Now, if he’d been awarded the prize during the Bush Administration, only to step up to the mic and say something in protest of Bush-era policies (and not an infantile “Bush can’t read” remark), then maybe he’d have shown some guts. Still no decorum, but guts, of a sort. Half the country would still be ticked off at him, he’d still have tossed away all those years of good will, but at least he’d have done so in spectacular fashion, making his rival-even-in-death John Lennon look like a piker for merely mailing back his MBE to Queen Elizabeth. 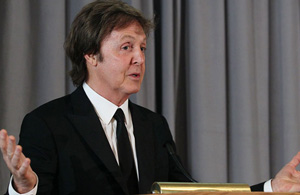 Not that I believe for a minute he would have done that, because one of the digs at Paul that’s managed to stick over the years is that he’s a brown-noser, a guy eager to be loved and thus willing to suck up. If W had tapped him for this prize, he’d have accepted it, and he’d have kept the “Bush is dumb” jokes to himself. In that context, “Bush was dumb” was just his way of working the crowd. The roadie with the cue card says we’re in Philadelphia tonite? “Go Phillies!” This is Paris? “Viva La France!” Obama White House? “Bush can’t read!” Pause for applause. For Lennon to go up against a sitting President and risk deportation or worse was gutsy; this was just a cheap shot at a straw man. Bush is gone, has been for well over a year and is not about to come back. For a guy so deft at the bass and drums, Paul’s timing is decidedly off in the comedy department. Maybe next time he can follow up with a dig about how clumsy Gerald Ford was.

Personally, I think there’s a wide swath of Americans out there thinking, “Oh brother, not him too!” whenever they hear a celebrity taking either side in politics. Unrealistic as it may be, we’d like to think at least some performers are willing to stay off the political soapbox, or maybe it’s just that we hope in vain for some little corner of our lives to remain untouched by the partisan rhetoric that’s increasingly tainting our relationships with our neighbors, our relatives and our co-workers. Sometimes you just feel like taking a break from that crud, and logically this event should have been one of those times.

Adding to the “let’s make this bigger than it needs to be” nuttiness, Rep. John Boehner (R-OH) has called on Paul to make a public apology for his remarks. Which of course he shouldn’t do. The cat’s out of the bag for any fans who still harbored hope that a 60s icon, marijuana advocate, PETA champion and wearer of Nehru jackets might somehow share their conservative politics, and there’s no undoing that. Apologizing would just cheese off the fans who share his views and think he’s great for having aired them.

Anyway, I’ve no doubt Paul will weather the storm. As controversies go, this hardly holds a candle to the time he sued his fellow Beatles to dissolve the partnership and thus put the last nail in the coffin of the 60’s “peace and love” trip. Not to mention the time he responded on camera to the tragic death of his band-mate, co-writer and “brother” John Lennon by saying, “It’s a drag.” If Beatlemaniacs got over that stuff, then what’s a lame joke or two? Ultimately, you just can’t stay mad at the Cute One.

Even now, the problem’s pretty much been solved for him. As history’s proven time and again, there’s no controversy that can’t be solved by laying low until the next controversy blows up. This time, thousand-year-old nutjob White House correspondent Helen Thomas has jumped on the grenade for Sir Paul, declaring that Jews should “get the Hell out of Palestine” and go back to “Poland, Germany, America and everywhere else.” And in a dazzling demonstration of marketing savvy, she made the remarks to an outlet called RabbiLive.com. Compared to that kind of gaffe, Paul’s Henny Youngman impression comes off like…well, like an aging hipster making a harmlessly unfunny joke. Big whoop.

Maybe some good can still come from this. Maybe I should take these remarks from Paul and Helen and pitch one of those “clip shows” to cable outlets. I can see it now: “Geezers Say The Darnedest Things.”

One thought on “Paul McCartney: The Accidental Activist”