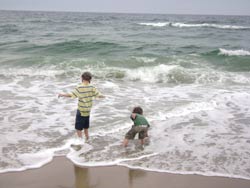 The kids had a blast at Nags Head last week with Grandma and Grandpa, despite a lack of cooperation on the part of Mother Nature for the first three and a half days.  Overcast skies, cold winds and even colder water couldn’t keep the boys from wading waist-deep in the surf, though it did make for some whining on the way back to the beach house.

It continues to amaze me just how much energy those guys have.  Once the weather cleared up, we visited Jockey’s Ridge State Park (“largest natural dune on the East Coast”) and they ran the entire time…up the dunes, across the dunes, down the dunes.  Then we visited the Wright Brothers Memorial and they did it all over again…run, run, run.  I don’t know if it’s that they’re so full of energy or that I’m just getting old, but honestly I don’t see how they do it.

I thought the kids would get a kick out of the Wright Memorial, given their fascination with planes and history, and Jason’s had a very nice picture book on the Wright brothers for years.  Now I’m not so sure Jason even read it.  The first time I brought up a visit to the park, he asked, “Will we see where they crashed and what’s left of the plane?”  Then when we climbed up to the monument itself, and found a vault-like door at the base, he wanted to know, “Is this where they’re buried?”  When exactly did this kid get such a morbid streak? 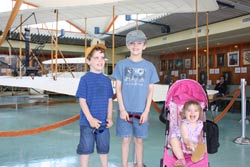 We also made a trip to Roanoke Island Festival Park, where we toured a recreation of a Native American village and an early pioneer settlement.  Reenactors showed us around a replica of the sailing ship Elizabeth II and Jason even got to help turn the capstan on a “work detail” as everyone sang a shanty.  For her part, Grace got to push all kinds of buttons in the museum — always a favorite passtime — and modeled a new wardrobe of sun dresses hand-sewn by Grandma.  She wasn’t too into the beach, though; not really a “sand between your toes” fan, that girl.

We had to come back a bit early so I could help out with the recording/streaming of VCU’s commencement ceremonies, so Laura spent a big chunk of her birthday in the car, which was kind of a drag, but all in all it was nice getting out of town for a while and relaxing in a new environment.  The next planned trip will take us all the way to Minnesota by car, which promises to be not nearly so restful.