If It’s Tuesday, This Must Be Springfield

As I write this from a hotel in Springfield, Illinois, the Morefield family is nearly two weeks into a summer vacation that’s taken us halfway across the country in the family mini-van. 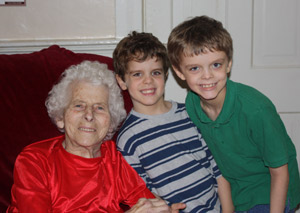 The impetus for this epic sojourn was a 90th birthday celebration for Laura’s grandmother, Marie, in the small farming community of Mazeppa, Minnesota. Her actual birthday comes later this month, but Grandma wanted to time her celebration to coincide with the big event of the year, “Mazeppa Daze” (yes, that’s the correct spelling), which brings in not only the 700-odd residents of the town itself, but revelers from all over Wabasha County, neighboring Goodhue County and probably a good deal further out, including in this case Reuter family members from as far away as Ohio, Missouri, North Dakota and in our case, Virginia.

The self-mocking motto for the event and the town itself is “Where the Hell is Mazeppa?” which I guess means everyone else gets the same reaction I do whenever they state it as their destination. The answer I usually give is, “less than 10 miles from Zumbrota,” which sometimes gets a laugh but either way gets the idea across. Zumbrota actually might mean something to a handful of my fellow comic book history geeks as the home town of Captain Marvel’s co-creator and definitive artist C.C. Beck. Or then again, not.

Anyway, Mazeppa’s a neat little town with a gas station, a couple of churches and a disproportionate number of bars. Also there’s a pretty cemetery on top of the hill, where Grandpa Peter was laid to rest in 1995. He’s safely tucked away on what used to be “the Catholic side,” back in the days when a wrought-iron fence made sure the Lutherans stayed in their place (I hope that fence extended as far underground, if it was to do the job right). 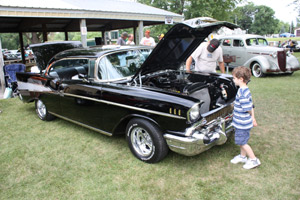 Mazeppa Daze itself was a fun throwback to the small town celebrations I grew up with, especially the Oyster Festival in Urbanna, Virginia. We got a parade with school bands, vintage cars and tractors, fire trucks, beauty queens and local notables. Plus of course the politicians crashed the party, shaking hands and passing out fliers. And in the time-honored tradition, everyone threw candy to the kids. Someone let Jason and Scott break through the lines to stand close to the action, so they could get their share, but of course they know they can’t eat about 90% of all candy, thanks to their plethora of allergies. It was actually knd of depressing watching them stand there, ignoring the steady rain of Tootsie Rolls, peppermints and Dum-Dums, in hopes that someone might eventually dispense some Smarties or Skittles. Every now and then something unfamiliar would land at their feet and they’d stoop to read the ingredients list before putting it down again. Wow, I’m depressing myself again just typing this.

Grandma’s event was a parade in itself, of old friends and family and well-wishers filing into the fellowship hall at St Peter and Paul church to catch up with Marie and each other and enjoy food and conversation. Again, the sort of thing I grew up with at church socials, revivals and homecomings in small towns all over Virginia, but it’s interesting to find myself delivering lines like, “I haven’t seen you since you were this tall” instead of receiving them. The sound of little feet running around folding tables, the clank and screech of metal chairs as kids push them aside or trip over them, the general murmur of conversation and even the conversations themselves…all just as I remember them from 40 years ago and probably as they’ll remain for 40 to come.

Also in Mazeppa the kids got to see their first fireworks display, and it was a doozie. Mazeppa’s annual show, occuring a week after Independence Day, is regarded as easily the best show put on by any MN small town, and for most it’s second only the Twin Cities 4th of July exhibition. We had great seats, not far from where the volunteer fire department — including Uncle Fran — sent the rockets up. Scott’s not at all a fan of loud sounds, but he enjoyed the visuals with his hands over his ears. Gracie had a huge grin throughout (and learned to say, “Fireworkshh!”) Jason declared it the coolest thing he’d ever seen outside (putting it on par, I guess, with indoor spectacles like “Wipeout” and the Wii) and told Grandma “I kept blinking my eyes to make sure I wasn’t dreaming.” So I guess you could say they were a hit. 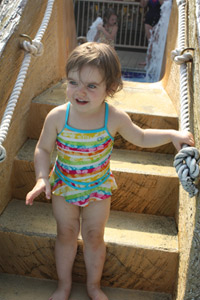 Anyway, for this trip we’ve driven the Hyundai all the way from Richmond, a first for us as we usually fly. The furthest point out was St Cloud, MN, where we stayed with Laura’s cousins Nathan and Val and the kids got to play with their cousins Ben, Sara and Katie. Then it was down to the cities for, among other things, a visit to the Mall of America, where Scott got to see his Mecca, the fabled Lego Land. Then on to Rochester for the Mazeppa events and now Springfield Illinois, where we’re tanking up on Lincoln data and lore to bring the homeschool lessons to life. From here we’re possibly headed for a rendezvous with Laura’s cousin Toni and her husband Pete and kids, summering in the States between their last American School posting in Africa and their next in Syria. Then we’re back to Ohio for some more time with Grandma and Grandpa Jim and then home. I’m not missing work much, let alone the 100+ temperatures on the East Coast but I’ve had enough restaurant food to last me a lifetime.

Hopefully now that he’s got his answer he’s still flying as high. I think so. I hope this is one the kids remember for a while. Not least because I don’t know if I’m up to doing it again.