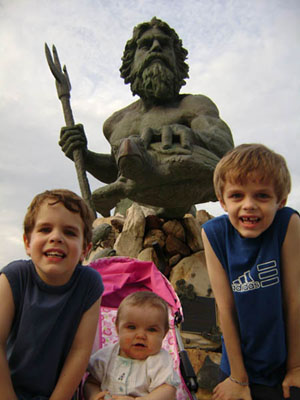 May was a busy month for us as we took two vacations almost back-to-back. First up was a trip to Pigeon Forge, TN for four days in a rented cabin. I have to say it was a lot nicer than I expected. The town is “touristy”, but in a Nags Head kind of way, with Go-Kart tracks and miniature golf courses, and not the no-holds-barred cheesiness of Gatlinburg, just five miles up the road.

We took the boys to see the magician Terry Evanswood, which went over very well; both of them had to buy magic kits when it was all over. Blacklight golf was another hit, as was a drive through the Smoky Mountains National Park.

From there, we traveled to Mammoth Cave in Kentucky. Everybody but Scott liked it; if you ask him what he liked about the trip, he’ll tell you “not the cave.” Then it was up to Louisville for a few days with Laura’s cousins Nathan and Val and their three kids. Jason and Scott helped cousins Ben and Sarah with their lemonade stand, and Grace hung out with year-old cousin Katherine, who apparently inspired Grace to start crawling. We also fit in a trip to the Louisville Slugger Museum and some time on the trampoline.

After a four-day break back at home, we headed out again, this time to Sandbridge, VA, just a few miles south of VA Beach. We had a bunch of stuff planned, very little of which we ever got around to, but the boys would have been happy to just splash in the surf all day every day, so why fight it? Grandma and Grandpa Jim joined us for five days and we got to see the Virginia Aquarium, Nauticus and the USS Wisconsin, among other things. Grace had a blast seeing all the fish and sea life, especially the frolicking otters (note to self: add “frolicking otters” to list of potential band names).

Hopefully the boys are old enough to remember all this stuff for a while. Actually it’s a pretty safe bet as they still remember the last beach trip, two years ago. Now the challenge will be soldiering through the rest of a long, hot summer with all our vacation trips already behind us.

One thought on “Vacation Fun”