The first episode of Star Trek aired on NBC fifty years ago today, Sept. 8, 1966, kicking off a three-year run on network TV.  I missed the whole thing.

In my defense, I started that run as a baby and ended it as a preschooler, but when the show aired in syndication in the early to mid-70s, I made up for lost time.  I’m reasonably certain I was introduced to Trek by my grandfather, who was a big fan.  My earliest impression was that it was scary, but in a cool way.  Every new planet posed a new set of threats: deadly viruses, hissing lizard men, sparkly clouds that sucked out your red blood cells, the still-living spirit of Jack the Ripper…heck, even the landscapes could kill you, with acidic soil, flowers that exploded in your face and rocks that stood up and started fighting you.  Just the everyday routine of “beaming down” unnerved me, as it involved disintegrating living bodies to their component atoms and reconstructing them somewhere else (Dr McCoy shared my unease, and with good reason, as the technology frequently failed, with all kinds of nasty results). 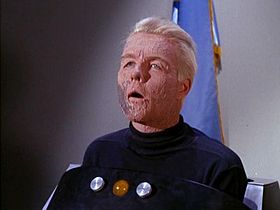 The creepy Spock character, thought young me, was kind of like Barnabas Collins but with pointy ears instead of pointy teeth.  And I must not have seen Part 2 of “The Menagerie,” because I was convinced the scarred, disabled Captain Pike was forever lurking in a room somewhere deep in the bowels of the Enterprise.

Add to that an endless list of space-borne threats including enemy ships, ion storms, radiation surges, meteor strikes, giant ghostly hands, you name it, and space travel was basically one big, 24-7 danger fest. Like most kids, though, I was attracted to scary things, at least scary things that could be decisively conquered in an hour’s time, so this was right up my alley.  After all, that constant undercurrent of danger was also a part of the real-life Apollo missions I watched with fascination during the same period.

The official line now is that Star Trek has endured because of its “positive view of the future” and progressive messages.  I’m not sure how radical optimism was in its day, though: a “gee whiz” outlook towards invention and technology goes way back to Buck Rogers, and considering the 50 years prior to Trek had seen us progress from the Wright Flyer to lunar orbital missions, I’d imagine lots of people had an “anything’s possible” outlook towards tech.  Or maybe the point is that in an era of race riots, assassinations and a nasty war in Southeast Asia, the mere declaration that we would survive into the 23rd Century constituted audacious optimism.  If so, the strength of the show was that this was never dwelt on at length, just presented as fact; “Oh look, we’re still alive in the future.  Cool.  Now what’s the story this week?”  As for Trek’s stories “meaning something” and conveying social commentary, well that’s nice when it works, but I guarantee you nobody tuned in then or now to be preached to.  What made the show compelling was the drama, the humor, the excitement, the relationships between the characters, the cool (for their day) special effects, the great sets and gadgets, the generally excellent production values (especially for TV) and music.  It was just a quality show, period. 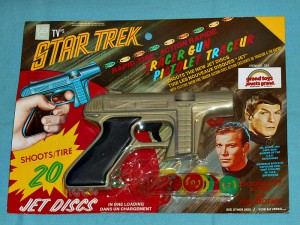 Anyway it certainly loomed large in my childhood.  I remember running around the back yard, battling imaginary Klingons with a plastic “phaser” that shot spinning helicopter-like wheels; it was one of those cheap toys you bought off a peg at the drug store.  I even talked my grandma into buying me a toy gun that shot discs just because the packaging said, “Star Trek,” though it didn’t look like anything ever seen on the show. As soon as you pulled it off the cardboard, it ceased to have any connection to Trek whatever.  Pretty sure I also had the “Parachuting Mr. Spock” figure, which made no sense at all. (Check out the Plaid Stallions site for a list of the coolest Trek toys of the 70s, too many of which I owned)

Between us, my brother and I collected every member of the Enterprise crew available as a Mego action figure (well, except for Uhura.  Girl “action figures” were dolls!).  There was even a bridge playset with a “transporter” that spun around and — voila! — the figure disappeared.  It’s still in my garage.

I had jigsaw puzzles featuring the “animated series” versions of the characters (Spock’s skin was bright green!), and a Corgi die-cast model of the Enterprise that got just about everything wrong, from a saucer section that fired discs to a shuttle bay on the bottom (!) of the secondary hull that housed a shuttle five times too large.  Probably the coolest Trek merchandise we had was a set of walkie-talkies that looked — sort of — like communicators, complete with little doors that flipped up.  In the TV commercial, one of the kids using the “communicator” called his playmate and said, “Scott, this is Kevin, my bike is broken!” Every now and then I managed to talk my brother into playing Star Trek, which wasn’t easy because he could never be Captain Kirk (one of the pitfalls of being a little brother; he was always Robin to my Batman, Tonto to my Lone Ranger, etc).  Invariably, after I’d gone to some lengths to set up a Trek-worthy plotline to enact in our yard, he’d summon me via communicator with a breathless, “Captain!  Do you read me?  Come in, Captain!”  In my most earnest, ramrod-straight Shatner impression I would respond, “Kirk here, what is it?”  And he would answer, “My bike is broken!  HAHAHAHAHA!” 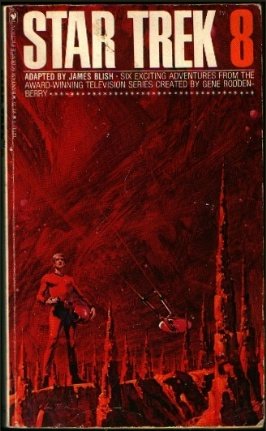 Those were the “dry” years for Trek, with the show long out of production and the later movies little more than a pipe dream.  We got by on novelizations by British author James Blish, with plots and characterizations that always fell somewhere between “slightly off” and “wildly inaccurate.”  The library in my small town school had a copy of volume 8 of this series and I kept it out on near-permanent loan. Then there were the Gold Key comics, featuring an Enterprise crew that might have been named the same as they were on the show, but looked, dressed, talked and acted nothing like the real deal.

At last the drought ended with Star Trek: The Motion Picture, which I managed to stay awake through in December of 1979 on my first visit to a “multi-plex” theater in Richmond.  My folks agreed to bring along a couple of my friends on the roughly hour and a half trip to the city, which they may have regretted when we had to take them all home again in a mini-blizzard.  A couple years later came Wrath of Khan, which blew my socks off despite the guy in the back of the theater who, when the USS Defiant flew across the screen, yelled out, “De Plane!  De Plane!” in his best Herve Villechaize impression (because Ricardo Montalban was also on…oh, never mind).  And then the rest of the sequels were cranked out more or less bi-annually in a seeming effort to illustrate the Law of Diminishing Returns.  Finally, the old cast moved aside to make way for the next generation of characters, and now Kirk and crew have been re-imagined in the form of pretty youngsters who look more suited to a remake of Saved By the Bell, with scripts to match.

It’s cool that Trek has become something of an institution I guess, but in a way, four spin-off series (with a new one on the way), 13 movies and countless books, comics and video games have built up a thick crust of barnacles on the Enterprise hull and blurred somewhat the magic of those original 79 episodes.  It doesn’t help that every detail of the show has been researched, documented and analyzed ad nauseum, so now we know how those effects were achieved, who was in that rubber suit, why that cast member stopped showing up.  Worse, we’ve seen the crumbling away of the carefully-constructed image of a cast who loved working together, leaving us with the reality of embittered 70- and 80-something ex-actors sniping at each other in the press like pouty teenagers.

BUT…at the end of the day, it’s those original 79 episodes that matter; everything else is apocrypha, mere distraction.  When I view them on DVD (or more likely, Netflix), the years fall away and I’m back on the original Enterprise, where everyone is young and vital again, wearing colorful uniforms and pointed sideburns and tackling the threat of the week with courage and teamwork.  Even at its worst (and it could get pretty bad) Star Trek was always interesting to watch, but at its best it was some of the greatest television to hit the airwaves.  More, it’s something that still connects me with my grandfather, though he’s gone, and something I can pass on to my kids, to maybe enjoy when I’m gone, too.  It’s the past and the future all at once.

Happy Anniversary, Star Trek.  Here’s to the next 50. 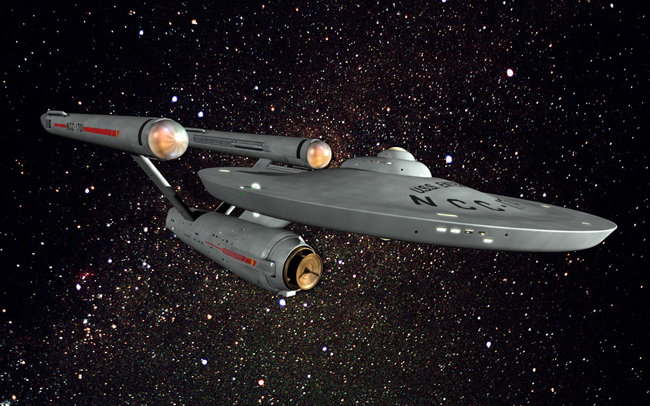