Dr Strange on the big screen 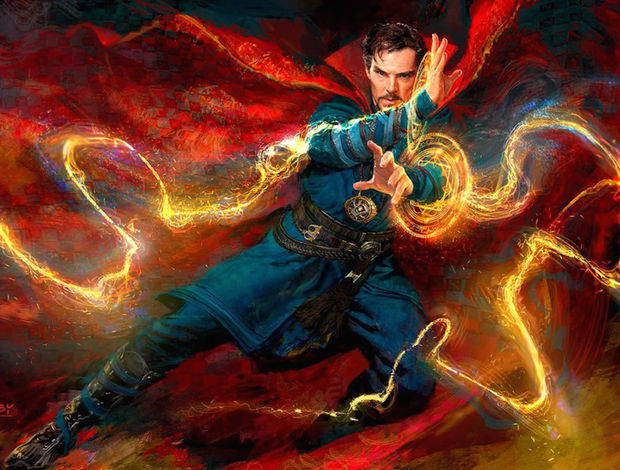 First up, I knew we were in good shape when Benedict Cumberbatch was cast as Strange.  Everything I’ve ever seen this guy in has been great, and he’s proven with Sherlock and The Imitation Game that he can do the “super-intelligent oddball” routine very well (if you’re going to be typecast, there are worse labels to bear than “smartest guy in the room.”)  He didn’t disappoint, and the rest of the cast was terrific, as well.  Beyond that, the special effects were fantastic, as well as the music (Michael Giacchino is probably my favorite film composer working today), so I have few complaints.

There’s been criticism from some quarters that the script is too derivative of earlier Marvel entries, which I anticipated, but actually the reverse is true.  The first thing I said to Laura when we came out of the first Iron Man film was “they stole the origin from Dr Strange,” by which I meant “super-talented but selfish, arrogant jerk redeems himself through heroic acts.”  In the comics, Tony Stark was a millionaire genius inventor, yes, but — at least in the early days — he wasn’t presented as a self-centered jackass.  Yes, he made his fortune from munitions, but in the early, Commie-bashing Marvel Age, that was presented a virtue, not a sign of moral compromise.  The movie’s presentation of Tony as a tragic figure with boundless creative potential yet locked in a tragic cycle of bad behavior, scandal and substance abuse was NOT a feature of the comics; it was a meta-textual nod to the real life story of star Robert Downey, Jr.  As much as Downey became Iron Man, with that film Iron Man became Downey.

Having proven a box-office winner, Iron Man went on to…let’s say “inspire”…other super-hero films, like “Green Lantern” and “The Green Hornet,” both featuring selfish, immature jerks who fall more or less sideways into heroism in spite of themselves, even though this formula runs entirely counter to how either character was portrayed in their decades-long histories in other media.

In the comics, it was Stephen Strange who was the self-absorbed jerk who for all his talent as a surgeon was falling far short of his potential as a human being.  Obsessed with fame and fortune, he refused to help patients who couldn’t afford his fees, or to contribute to any efforts that might advance medicine unless they were sure to increase his personal fame.  After a truly life-changing experience, he ends up at the extreme opposite end of things: dedicated to the welfare of all mankind at great personal risk to himself, and with no hope of recognition or reward. (Since he battles threats mankind must never perceive, to reveal his victories would, in effect, reverse them.) 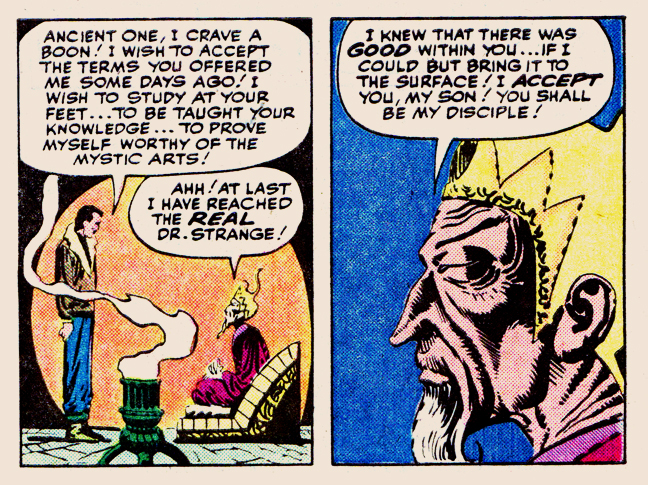 The movie did a pretty good job of portraying this, I guess.  It’s established from the start that he’s a brilliant surgeon, but it’s not until the last few moments before Strange’s fateful accident that we see he’s only willing to take on the “glory” jobs (later reinforced in a scene with Benjamin Bratt as a would-be patient once rejected by Strange).  Certainly he turns into a Class-A creep after the accident, driving away the woman who loves him (Rachel McAdams as Dr Christine Palmer) in his prolonged spiral into bitterness and self-pity. For me the pay-off comes late in the film, when Strange and The Ancient One converse in their astral forms and The Ancient One tells him that for all he’s learned, he’s still missed the most important lesson of all: “It’s not about you.”  This was the moment where I thought, “Yes.  This film gets it.”

I will admit, though, that the efforts to cast Strange in the “smart ass” mold were only partially successful, not really true to the character and not the best idea unless you want to invite comparisons to RDJ, who can never be beaten at his own game.  I also didn’t appreciate the couple instances of foul language in the film, especially from Strange himself.  I like to think I’m not prudish, but in a film with obvious appeal to kids, and which is on the whole far more accessible to and appropriate for young audience than any of DC’s sick efforts, these moments were jarring and unwelcome.

But let’s focus on what they got right.  One thing I always dug about Strange was that he operates in his own little corner of the Marvel Universe, with whole worlds and dimensions to explore on his own without running into other superheroes all the time or crossing over into company-wide “event” stories.  Both readers and Marvel accountants alike always loved the way Spider-Man was running into Daredevil, or the Hulk was trading punches with The Thing, because it meant in order to really enjoy your favorite book you had to know what was going on with the rest of Marvel, and every now and then if you wanted to see the end of your Avengers story, you had to buy an issue or two of The Defenders, or whatever.  I never dug that, partly because I frankly considered some Marvel characters nowhere near as good as others, or as deserving of my change, but also because I grew up in the boonies where I was lucky to find two consecutive issues of any title on the spindle rack, much less the entire Marvel line.  Due to his nature, Dr Strange could usually be counted on to star in self-contained storylines in his own little sandbox, and that’s carried over into the film, which despite a few Easter eggs and call-outs to other characters is not at all dependent on the rest of the MCU to work. 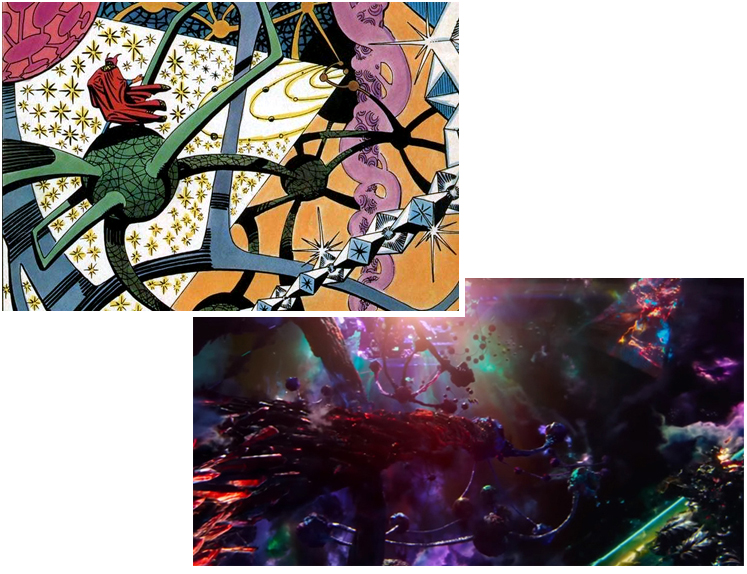 Second, I always enjoyed Strange’s trippy sojourns to other dimensions, as first imagined by artist/creator Steve Ditko and later by such talented illustrators as Gene Colan, Frank Brunner, Marshall Rogers, Paul Smith, etc. Again, the film does a great job of this with its take on The Dark Dimension, home of the Dread Dormammu. Like Ditko’s original, it’s a topsy-turvy dimension full of weird, seemingly organic structures, including orbs connected by creepy tendrils. Laura mentioned that they looked like neurons and dendrites, which I confess never occurred to me but, if intentional, makes wonderful sense in a film about a superhero neurosurgeon.

Also great fun are scenes that fold reality in on itself like a sort of origami-on-LSD. Rooms, buildings, streets, whole vistas are twisted sideways and upside down in kaleidoscopic fashion, lending an Escher-like quality to several battle scenes. 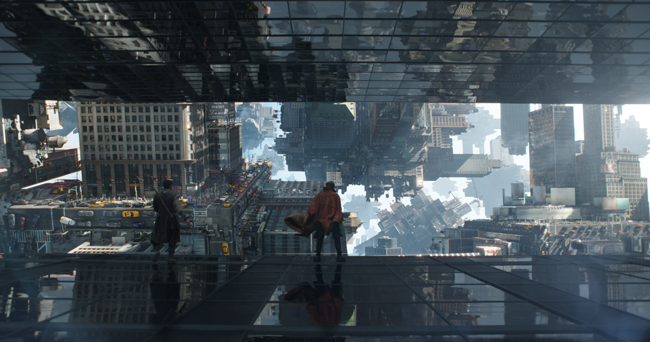 Then, there’s a third effect at the end of the film as Strange invokes a time-reversing spell that causes everything and everyone to move backwards except the principal characters, all sorcerers engaged in half-magical, half-martial arts combat.

Throughout all this, bystanders go on about their lives unaware of what’s happening under their noses, which checks off another item from my wishlist. In the comics, Dr Strange conducts his battles above, below, around and through the forms of mortals who are oblivious to these goings-on, and the stakes involved. Besides just being a cool concept in general (who’s to say what’s going on right now on a plane we can’t see?) this also gets us past the thorny issue of collateral damage in superhero movie throw-downs, an issue which has caused some controversy in several films, including casting a pall over “Man of Steel” that more or less powered the entire plot of Batman v. Superman (about which the less said, the better). Dr Strange finds a way to have its cake and eat it, too, giving audiences the big-budget effects they’ve paid for, but without inviting the “disaster porn” label.

Waaaaaay back in the 70s, I watched the original Dr Strange TV movie with high hopes that came to naught. There, we got a permed Stephen Strange with a bland costume and cheapo special effects. It took four decades, but at last we’ve got something awfully darned close to the movie I was hoping for, with the Cloak of Levitation, the Eye of Agamotto, the Sanctum Sanctorum, Dormammu, Mordo and Wong, so I’m happy. With the success of this film and before it The Guardians of the Galaxy, we can now hope for all kinds of Marvel B-listers to have their day in the sun, and that’s awesome. Especially since after all this time, the only thing DC’s had any luck with is still Batman. 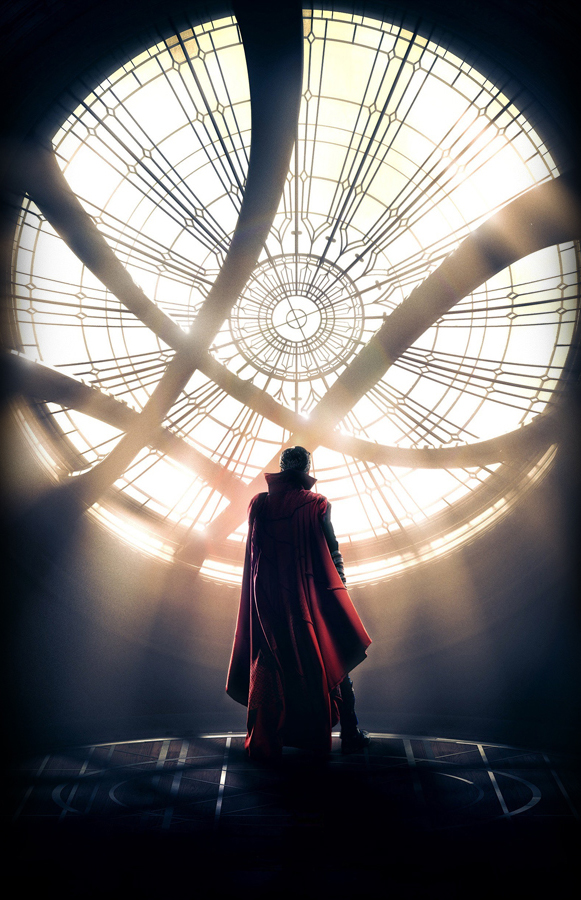