Earlier this month, comic book artist Mike Wieringo passed away suddenly at the too-young age of 44.

Although I only met him once, and briefly, I always felt an odd kinship to Mike. Like him, I grew up on a steady diet of superhero adventures, and spent much of my childhood drawing stories of Superman and Batman — and my own (derivative) characters — on any scrap of paper I could find. In my teens, I attended Rustburg High School two classes behind Mike’s. Whenever my classmates or teachers saw my work, the response was always the same: “Hey, that’s great” followed by, “You should see Mike Wieringo’s stuff.” From the way they said it, I knew what they really meant was, “Mike does it better,” or maybe “Thanks but we’ve already got a comic book artist at this school.”

I met Mike briefly when I was a new employee at VCU and he was finishing up his degree in Communication Arts, still a couple months away from being “discovered” by a publisher and landing his first gig in comics. I also learned we frequented the same local comics shop, though we never crossed paths there. Thus, I’m no expert on what kind of guy Mike was personally, though from everything I’ve ever heard he was a great human being.

What I can speak to, though, is Mike’s boldness and dedication as an artist. Talent is one thing; lots of us have talent. The key is persistence; pushing yourself to grow constantly, challenging yourself to move beyond what’s comfortable and be a better artist today than you were yesterday. That’s what moved Mike beyond what he was in high school — a kid like me aping the likes of Neal Adams and John Byrne — to what he became, a creator in his own right, with a style all his own.

Mike entered the industry in the 1990’s, an era defined by dark storylines where superheroes were getting killed, crippled, maimed, you name it. His style was like an antidote to all that emotional poison; it was bright and fun, featuring characters with big eyes and big feet, loose limbs and thick eyebrows. You could have called it “cartoony,” I suppose, or “whimsical” compared to what else was out there. It was new and different, and Mike found a hungry audience; fans embraced his work and made him one of the most popular artists in the business. He was assigned to some of the biggest titles in the business: The Flash, Superman, Spider-Man, the Fantastic Four. And of course, true to form, other artists came along to ape his style.

That’s what separates the greats from the rest of the crowd, in the end. There’s a handful of artists whose work is so distinctive any fan can spot it anywhere: Will Eisner, Jack Kirby, Neal Adams, George Perez…and yes, Mike Wieringo. Other artists may make the quick buck imitating those guys (and have!), but in the end it’s the innovators that get remembered.

So Mike, if you’re up there reading this, I’m sorry I never made the effort to know you in high school, or beyond. Sorry I always assumed I’d have another chance somewhere down the road. But I’m also happy that you got to live your dream, that you got to meet the greats of the industry as an equal, that you got to bring so much entertainment and pleasure to so many fans.

Somewhere out there right now is a kid drawing Spider-Man or The Flash based on the fun they had reading a Wieringo-drawn comic, and dreaming of the day he’ll be a famous artist himself. Thanks, Mike, for living the dream for the rest of us, and passing it on to the next generation. I hope that, for you, the adventure is just beginning. 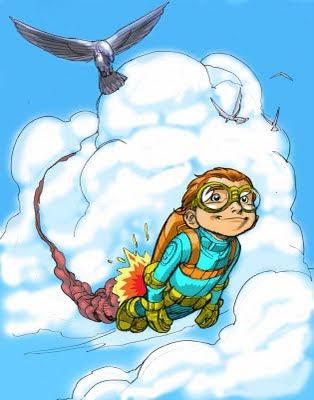