Getting Back on Track

It’s been an unusually white winter for us here in Richmond.  First we got a big snowstorm before Christmas, which was exciting just by nature of its rarity.  Then we followed that up with three white-outs in a row in January and February, so suffice to say the white stuff’s pretty much worn out its welcome around here.  (Heaven only knows how bad it could have gotten without “global warming.”  Thanks, Al!).

The last week or so, then, has been spent trying to get life back on track as things postponed by bad weather finally get around to taking place.  First up was Scott’s birthday, scheduled for the last weekend in January and rescheduled twice before it finally came off. 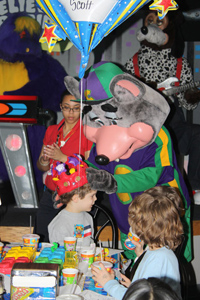 Scott chose to host the festivities at Chuck E. Cheese, which is always an adventure.  If you’ve never done a Chuck E. Cheese party, here’s the gist: your young guests show up and are each given a cup full of tokens to use in video games and rides.  Then they all run their separate ways into a teeming throng of kids from various other parties, or no party at all, and compete for playtime on the best games.  Then after a while an announcement is made over the PA system that “For anyone in Scott’s birthday party, the pizza is ready!”  at which point all the parents report to the table.  Then they go out and find their kids — who don’t listen to PA announcements — and bring them back to the table.  Then the kids stuff their faces while giant animatronic rodents play knock-offs of 80s pop tunes and a guy dressed like a 6-foot-tall Hip-Hop mouse coronates the birthday kid with an inflatable crown and hangs a medallion around his/her neck.  Then comes the cake, then you’re out of time because the next group is waiting, so instead of opening presents the kids scatter back off again, lest they actually spend any time interacting with each other or the birthday kid.  When the tokens are gone, you can go home.  Repeat as necessary until every kid in your child’s class has celebrated their respective birthday.

Oh well, anyway the kids seem to love it, which is all that matters.

The same day as the party, Scott and I attended a “Side By Side Saturdays” class at a local art studio, where we made a clay mask together.  Sometime this week it’ll be fired and this coming Saturday we’ll paint it.  This activity had been delayed one week by snow as well.  Jason and I took a bunch of the classes last year and enjoyed it, and Scott’s excited to finally be old enough to get in.

The other big event was the Pinewood Derby this past Monday night, postponed from the week before.  Jason got a major assist from Grandaddy and his jigsaw in the early stages, and he’s enjoyed the construction and painting process over the last few weeks.  There was a good turnout for the race, and a really cool track on loan from a larger scout pack that meets nearby.  The track had a photo-electric cell at the finish line and sent digital times for each car in each heat to a laptop computer, which we all got to see via video projector.  Pretty spiffy.

I was surprised at the speeds some of the cars reached; Jason’s best time was 192.2 mph, but one kid (not even a scout, but the sister of one, racing in a “siblings” heat) clocked in at 199.7, which is amazing to me.

Anyway, a good time was had by all and I continue to be impressed by the good sportsmanship and sense of fraternity exhibited by the boys in our Pack, some of whom are quite young. Naturally I’m especially proud of Jason and how well he interacts with the other boys, given his sometimes less than civil behavior towards his own flesh-and-blood brother.  Ahem. 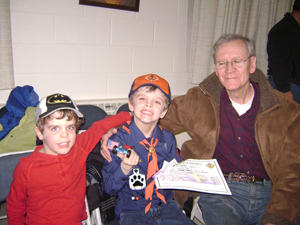 As the youngest scout in the Pack, Jason is the only resident “Tiger,” so he ran against the 7-year-olds in the “Wolf” den.   He was very excited to take 2nd place in that grouping and advanced on to the final round against some of the older kids.  Happily, Grandaddy was able to attend and see the results of his collaboration with Jason.  Scott also came along out of an intense curiosity to learn more about this mysterious “Cub Scout” thing that occupies so much of Jason’s time and energy.

As it happens, he was not that impressed, observing “They didn’t have any toys.”