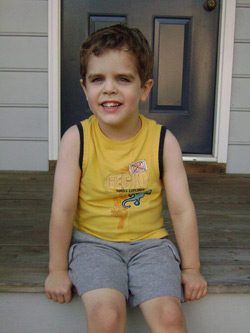 Inconceivable as it seems, our Scott turns five today.  That is to say, it seems to have happened lightning-fast for Mom and Dad, but from Scott’s point-of-view, it’s taken an eternity.  All this last month he’s been counting down the days until he “finally” turns five.

It seems like only yesterday Scott arrived, all tangled in his umbilical cord.  I had this cold terror he’d been starved of oxygen through the whole delivery, or longer, and was in real trouble.  Luckily, though, the cord wasn’t just around his neck, but his whole torso.  Somehow in all his jumping and twisting, he’d managed to tangle himself completely, spending the last couple weeks of the pregnancy bound up like Houdini with his arms pinned to his sides.  Typical Scott.

I like to think all our kids are bright, but Scott’s definitely the scientist in the brood.  Once when he was just a few months old, I was feeding him lunch when he noticed a bright spot  moving on the wall of the kitchen.  Immediately he looked from the light to my watch and back again,  apparently figuring out right away that he was seeing a reflection, and what was causing it.  Much later we were in the mountains of Tennessee watching a stream flow by when he asked me where the water came from.  “Well,” I said, “it’s coming from uphill.  It’s moving like that because water flows downstream.”  “Yes,” he said, “but I mean, where did it come from at the beginning?”  I confess I had to guess at an answer: underground caves?  Melting snow? But it’s typical of Scott to want to know not just what he’s seeing, but what the reasons are behind it.

Scott has a heart of gold, always willing to share even his most treasured possessions with pretty much any kid who asks.  He absolutely adores his little sister and when she kisses him on the cheek, his eyes roll back in his head from sheer bliss.  He and Jason are typical brothers, always competing, often fighting but absolutely inseparable and fiercely protective of each other.

In short, it’s been a real honor and lots of fun to be Scott’s dad the last five years, and I’m looking forward to the next five. But I’m in no hurry for him to grow up, no matter how unbearably slow he thinks it’s going.

One thought on “Happy Birthday, Scott!”