Wonders of the Dive Cam

I’m going through my usual routine with the Olympics this year, which is to promise myself I’m going to watch tons of events, then end up watching very few of them. Besides just being busy — and impatient with commercials! — one reason is that the networks and I are rarely on the same wavelength when it comes to what to broadcast. If fencing was broadcast at all I missed it entirely, for example, but every single moment of volleyball is covered in nauseating detail. I can only assume it has something to do with watching girls adjust their bikini bottoms. I still don’t remember when volleyball became an Olympic sport, but I guess it makes more sense than snowboarding. If they let in bowling, though, I’m out of here. 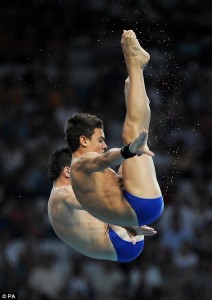 One thing that has been fun to watch is the swimming events, especially the relay races and the diving, even if it is “synchronized” diving. Like a lot of other folks, I’ve been really impressed with the new “Dive Cam” that follows competitors off the platform all the way down into the water. The Wall St Journal ran an interesting article on the science behind this technological breakthrough, which basically involves (not to belittle the work that engineers have put into it) just dropping a camera down a tube and pulling it back up with a rope. Cool.

I’ve always been interested in how cameras are designed and modified for film and video production, and the stories behind how and why new innovations occurred. It’s interesting, for example, that Hollywood worked out all kinds of cool camera techniques very early on, only to have to go back to static cameras with the addition of sound (and all the attendant audio hardware) and reinvent everything all over again.

Nice to see there’s still this kind of inventiveness going on, though I guess it’s entirely in sports now. On TV shows, all they want to do is hand-held cameras that constantly jiggle and pan and zoom to create a sense of “reality”. As if even a middle-aged dad with his first camera would actually have that much trouble with the “zoom” feature.

One thought on “Wonders of the Dive Cam”