Big news last week as the Oscar Mayer Wienermobile crashed into a home in Racine, Wisconsin.  Apparently the driver was trying to turn the vehicle around and went forward when she meant to go backward.  Luckily nobody was hurt, though you have to wonder what it’s like to come home and see this tableau unfolding in your driveway: 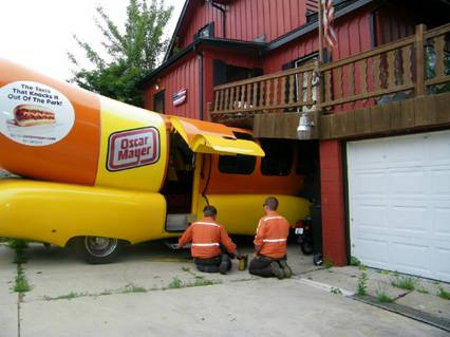 Here’s one of those fun little mishaps reporters live for; a chance to pull out the jokey headlines and show how witty they ain’t.   Here’s a few I found with a quick Google search:

Fox News: “One southern Wisconsin homeowner is probably not in love with the Oscar Mayer weiner.”

Fox6 News (Milwaukee): “The Oscar Mayer Wienermobile got itself into quite a pickle when it crashed into a Racine home Friday morning.”

And…surprisingly, that’s pretty much it.  You’re slipping, guys, there’s plenty more material to work with.  How about “Looks like this driver just couldn’t cut the mustard!”  Or maybe, “I’ll bet she doesn’t relish explaining this to the homeowner!”  Or even, “Police say they never sausage an accident!”

Actually, my favorite is from Racine’s local paper, the Journal-Times, where the headline read: “Vehicle batters house; easy to get description.”

Maybe I shouldn’t pick on reporters for making funnies, though.  At least it breaks up the phoned-in monotony of the umpteenth “hail of gunfire,” “rash of thefts” or victim found “in a pool of blood.”  Plus the ever-popular “alleged.”  My favorite is “City resident John Smith was allegedly shot to death last night by his wife.”  What does “allegedly shot to death” mean?  That an autopsy may prove he actually drowned?  Or that he’s probably faking the “death” thing and he’ll be back on his feet in a couple of weeks?

Of course, having an errant wiener wreck a happy home is hardly news at all any more, but I guess in this case size really does matter.  Ho ho. See?  I knew that journalism degree would come in handy someday.