Hulk to Police: It’s Because I’m Green, Isn’t It? 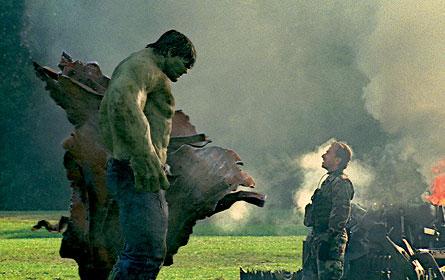 Crazy story out of Cambridge, Mass this week with the arrest of Harvard Professor Henry Louis Gates.

Let’s recap: a neighbor sees two men trying to force their way into the professor’s house.  The neighbor doesn’t recognize Prof. Gates (Inexcusable, right?  Naturally all of us know all of our neighbors well, yes?)  As for the other man, he’s a limo driver hired for the day, so why should anyone know him?  Gates goes into the house from the back and pulls on the uncooperative front door while the driver pushes, so now we’re down to one definite stranger pushing on the front door.  Neighbor calls the cops to investigate, as you might hope your neighbor would, on seeing people forcing their way in your front door.

From here on in, the stories differ.  Gates says he explained it was his house and produced his ID, and the officer wouldn’t give his name and insisted on running him in.  The officer (a Sgt Crowley) says Gates called him a racist, yelled, “this is what happens to a black man in America,” insulted his mother (!) and made it impossible for him to call in a report to headquarters.  Anyway, Gates is arrested.

Next, President Obama demonstrates his legal training and natural leadership qualities by saying at a press conference, “I don’t know all the facts” but the police “acted stupidly.”   The police officer involved — who incidentally teaches a class for rookies on the dangers of racial profiling — is now threatening a libel suit against the professor.  The professor, meanwhile — whose wife is white and who by all accounts is not the militant type — is considering a wrongful arrest suit against the police.

The real winner in all this?  Whatever enterprising burglar decides to actually rob Gates’ home.  It’s a sure bet no neighbor will bother to call the cops now, even if they see furniture, electronics, jewelry and a safe being loaded into the back of a van by mysterious strangers in stocking masks.

The losers? Anyone still clinging to the notion that the 2008 elections ushered us into a post-racial, post-partisan utopia light years away from the days of Rodney King and O.J. Simpson.  That, and anyone who hoped for a President who might actually act…well, presidential.  As others have noted, when you start a sentence with “I don’t have all the facts,” then the way to end the sentence is, “…so I cannot comment.”  Instead Obama rushed to the defense of his friend, invoked the specter of racial profiling (and thus implied it had happened in this casse) and escalated a local controversy into a national screaming match, with the predictable diatribes against police everywhere, and Cambridge residents now leaving Gates’ property littered with signs calling him a racist.

It wasn’t that long ago the President was responding point-by-point to arguments made by Rush Limbaugh on the radio, theoretically to tar the Republicans by making Limbaugh their “leader” in the eyes of the public, but all it really did was elevate a radio personality, an entertainer, to equal footing with the leader of the free world.  For a supposed political genius, sometimes this guy comes off like a real bozo.

Not to worry, though; Obama’s offered to share a beer with both men at the White House in the near future, and everything will be hearts and roses again before you know it.  At least until the next blow-up.

One thought on “Hulk to Police: It’s Because I’m Green, Isn’t It?”