Obama And the Politics of Crowds

Between work and a new baby, it’s hard to find the time or energy (or frankly, the interest) to write entries of a political nature here, but I have started several times to jot down my thoughts on the extraordinary spectacle of Obama’s ever-growing cult of personality, only to give it up when the words wouldn’t come together for me. Happily, now I don’t have to, as Professor Fouad Ajami has done it far more eloquently than I could’ve managed even at top form, in his article “Obama And The Politics of Crowds.” 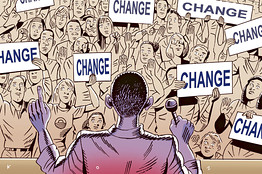 Obama’s genius is that he’s the Mr Potato Head of Politics; simply pick and choose the features you like and assemble him to suit yourself. In maintaining his tabula rasa persona, he’s become all things to all people, which makes for a thrilling and yes, “hopeful” story if it simply ended with him putting a hand on the Bible and taking the oath, fade to credits. But of course that’s when the story will actually begin. On that day, he’ll stop being the Create-Your-Own-Superhero and start being the Chief Executive, a guy who every day he’s in office will have to deal with real issues and make real decisions, every one of them bound to disappoint, offend or enrage someone out there in the electorate. That’s just the nature of actually governing as opposed to just running for the office from kindergarten on. It’s quite a fall from Savior of the Universe to just another politician; I hope he can survive without the adulation.

3 thoughts on “Obama And the Politics of Crowds”