Lois Lane Holding Up Well, Comics Not So Much

We spent Thanksgiving in Columbus this year, so I got the chance to attend Mid-Ohio Con for the first time in nearly ten years. The show’s grown a bit over time, but not as much as I’d expected. I did learn a few things…

1. Noel Neill is a great lady. I was struck by how pretty she is even now (incredibly, she celebrated her 87th ((!!)) birthday at the Con) and how sweet. For some reason I thought she’d be taller, not sure why, but now I know George Reeves must’ve been about my height. Which is cool, I guess. She was nice enough to sign this picture for me: 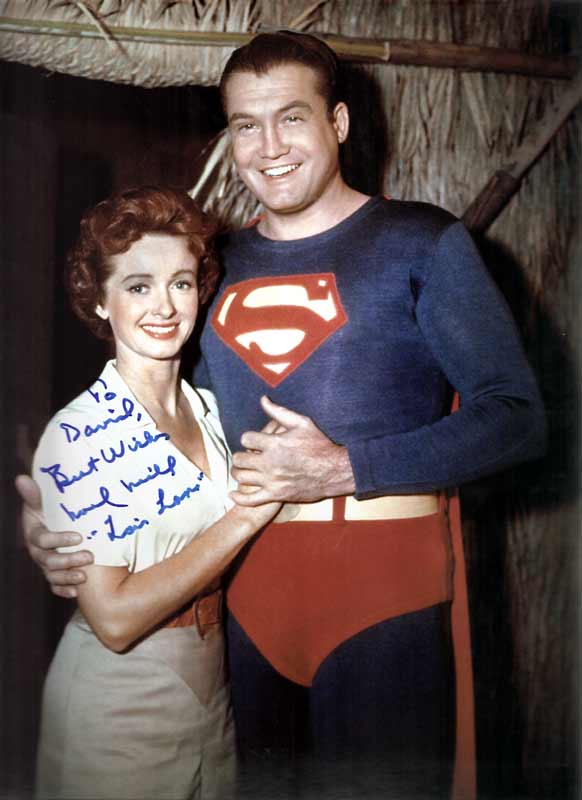 2. Mark Goddard, on the other hand, is taller than I expected. “Major Don West” always seemed a bit on the short side on “Lost in Space,” standing next to Guy Williams, but he looked above average height to me in person. Makes me wonder how big Guy was.

3. “Zombies” are huge. The latest thing over at Marvel Comics are books featuring their heroes in an alternate reality where they’re all undead, rotting and falling apart in all sorts of gruesome ways. Yick. But the line for the artist on these books was longer than any other line at the show, and various other artists in attendance(both professionals and those aspiring to be) were doing their own versions of zombie superheroes, Marvel and DC alike. Another sign I am completely out of touch with modern comics fandom.

4. Old comics are expensive. I know, “duh”, right? But I was surprised at how much even the books of the 70s and 80s are fetching, or rather what dealers are asking. The weird part was thumbing through long boxes and finding the occasional Golden Age book for hundreds of dollars. I’m used to dealers putting war-era issues of “Batman” or “Captain America” on the shelves behind them to establish their bonafides as “real dealers” (and maybe to make a few sales to well-heeled collectors), but it was a new thing for me to rifle through a box of books and come across issues of Superman from the 40s with a $300+ asking price. Shouldn’t these things be in a safe or something?

5. New comics are worthless. It’s not just my opinion anymore. Dealers were offering books from this year for a fraction of cover price, including some high-profile, headline-grabbing books. Is this because so many montly comics today are quickly collected into trade paperbacks, making the originals worthless? Or is it just because today’s comics are the kind of things everyone wants to see the day they come out, but nobody wants two weeks later? You know, like most new movies?

6. Old comics are not long for this earth. I know, another “duh,” but in prepping for the show, I dug out a bunch of back issues to get signed and was struck by how badly they’re holding up, even boxed and bagged. Then when I saw other fans around my age handing over their comics for signatures, comics as yellowed and crumbling as my own, it struck me how depressing the whole hobby can be. All that time and effort put into collecting stuff that’ll be gone so soon. It kind of took the fun out of the search for back issues, which leads me to…

7. E-bay and the internet are the way to go. The first shows I ever went to, back in the mid-80s, were treasure troves of old comics I’d never have had a shot at seeing, much less buying, any other way. But the internet has made those books more available, year-round, and in most cases, cheaper to boot.

So, what did I learn, in all? That there’s not much point in going to shows any more. New stuff doesn’t interest me, old stuff is overpriced considering it’s already half-decomposed and even if I get the urge to buy, I can do better on-line. Seeing celebrities is cool, but considering the ones I’m most interested in are in their 70s and 80s, there’s only so much longer I can keep doing that, either.

Which is not to say I didn’t have a good time. 🙂 It’s just that it’s probably going to be the last.