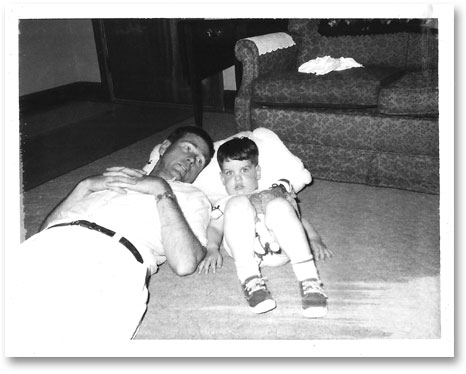 I lost my grandfather on November 21st.  Actually, I lost a lot more than that.  I lost a friend, a mentor, a debate partner, an inspiration and one of the pillars of my world.

When my arrival made him a grandfather in 1965, William Allen Dayberry was only 44 years old, the same age I am now.  Understandably, he thought he was too young to be addressed as “Grandpa” or “Grandad,” so he asked to be called “Daddy Bill.”  I tried, but the best I could manage was “Dadda Bull.”  He didn’t complain, so that’s what I — and later my little brother — called him until at some point in our teen years it became “Granddaddy.”

Looking back, we were unusually blessed to have such a young grandfather, not only because we got to hold onto him so long but also because when we were small he was still fit enough to horse around with us, take us camping or take us along with him on his jobs, which were always fascinating.  He worked for many years as a painting contractor, honest physical labor often in the outdoors in all seasons.  It was hard work, really, but to a little boy it was almost glamorous, heading off to work in a noisy panel truck filled with paint cans, tarps and extension ladders, wearing a white “uniform” and getting to paint and climb.  The scraping wasn’t so much fun, though.  I’m still not sure what he got out of my “help” besides the company; to find an “assistant” less mechanically inclined than myself, he’d have had to recruit from a species lacking opposable thumbs.  But again, he didn’t complain. 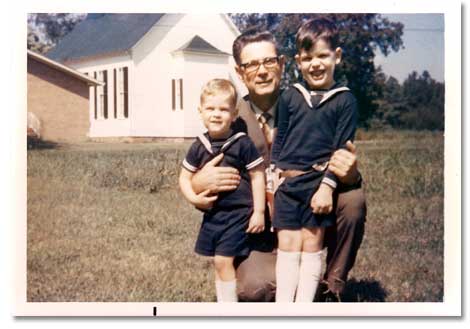 Granddaddy didn’t have a lot of formal schooling — he quit school at 14 to help support his family — but all his life he was in love with learning.  Over the years, he taught himself a lot about electronics, aviation and other subjects.  I remember how much he enjoyed The Towering Inferno, not because of the special effects or any of the A-list stars but because the whole conflagration came down to an entirely plausible wiring snafu.  Similarly, he liked John Frankenheimer’s film, The Train because freedom fighter Burt Lancaster kept thwarting Nazi Paul Scofield’s efforts to abscond with a train full of stolen French artworks through acts of sabotage that were not only ingenious but also totally credible.

But then, he loved just about anything to do with trains, poring over written histories of the great passenger and freight lines, reciting songs and poems about famous routes and wrecks, building model engines and cars and collecting vintage lanterns and spikes and other memorabilia.  From an old train station he once salvaged a telegraph device, rigging it up to send messages from his workshop in the basement to a receiver upstairs in the den, to the consternation of my grandmother.  I can still hear him singing “The Wreck of the Old ’97″…I guess it made impression because of the local references (“It’s a mighty rough road from Lynchburg to Danville and a line on a three mile grade…”) or maybe the grisly ending (“He was found in the wreck with his hand on the throttle, scalded to death by the steam”).

Music was another of his passions; he had a phenomenal collection of swing-era jazz recordings and an encyclopedic knowledge of the songs and the men who wrote and performed them.  Growing up I couldn’t have named the Rolling Stones for you, but brother I knew who Fletcher Henderson was, and Benny Goodman, Artie Shaw, Bunny Berigan and Jack Teagarden.  His enthusiasm was infectious; to this day, I put Hoagy Carmichael’s “Stardust” right up there with McCartney’s “Yesterday” as one of the most perfect feats of songwriting ever.

Granddaddy’s laughter was also infectious.  I remember how much fun it was to watch Laurel and Hardy, Pink Panther movies, Benny Hill or cartoons with him, because he’d laugh so hard it made me laugh, too.  He was the “life of the party” type, not only funny himself but genuinely appreciative of, even delighted with other people’s sense of humor, and possessing a general positivity that made people want to spend time around him.

He was also a fantastic whistler, and no matter how hard he was working I remember him whistling away like he didn’t have a care in the world.  That and the laughter convinced me as a kid that he must have been the happiest guy on Earth.

I’ll also remember our camping trips.  You could always tell our campsite because he’d hang a plastic dropcloth over the picnic table to protect our food and camp stove from, well, nature. I remember him driving his van up the winding roads of the Blue Ridge Parkway with my brother Tim in the back on a lawn chair as it slid to and fro (“Turning to the right! Lean to the left!”).  Once I asked about a sign on the side of the road that read, “Beware of Fallen Rock” and he was only too happy to “explain” it to me.  “Fallen Rock was an Indian brave,” he told us, “in love with the chief’s daughter.  To win her hand, the chief sent him on a dangerous mission to capture a bear.  The bear tore his head off and now his angry ghost wanders this mountain, looking for his head.”  I don’t think I slept much that night, convinced every sound I heard was old Fallen Rock skulking around our campsite.

This deadpan joshing is one of the few traits I know I inherited from Granddaddy.  Laura is forever calling me out for telling the kids some ridiculous tall tale or other, I guess just to amuse myself (“Don’t tell them that, David, they might believe you!”).  The week before Granddaddy died, we took the kids down for a visit and he was still at it.  Told that Jason had earned his Bobcat badge and was on his way to being a Tiger Scout, he said, “You’re a lucky boy.  When I was  young they didn’t have Tigers, so I had to be a Muskrat.  I was trying to work my way up to Possum, but I messed it up so bad they demoted me to Skunk.”  Jason looked at me with a “he’s kidding, right?” expression and I knew exactly how he felt. 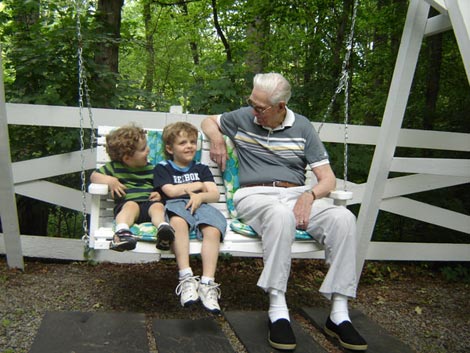 The kids knew him as “Big Daddy,” taking their cue from my nieces, who got here first.  Fair enough, as he was always a father figure and “Big Daddy” had a distinctly Southern quality to it, as he himself did.  I’m grateful they got to know him; he always had a way with kids, probably because they could always see the kid in him, no matter how old he got.

Granddaddy was 88 years old when he passed away, though you’d hardly have guessed it if you met him.  He was one of those larger-than-life people who’s just so full of life, so engaged that it’s hard to accept it when they’re gone, no matter how old they are.    I was going to write that it’s hard to let go, but then I realized there’s no real reason I should.  He may not be around physically for me to visit or talk to, and I’ll surely miss calling his number and hearing him answer, “Mmmmyyyellow?”, but in a very real sense he’ll always be with me; in my thoughts and memories, in the mannerisms, interests, values and sense of humor he passed down to me, in my genes and those of my children.  He’ll be there when I hear those old songs, or when I see a train or hear its whistle.  And as one of those old songs said, they can’t take that away from me.

So it’s au revoir, Grandaddy, but not goodbye.  Until we meet again, I promise to try — though it’s never been as easy for me as it seemed to be for you — to keep looking on the bright side, to make the most of every day and to always find something to be grateful for. Today it’s that you were my grandfather.