Some time ago, I posted images of Scott’s self-created superheroes Fireflash and Tongueman. Well, lately he’s been at it again. 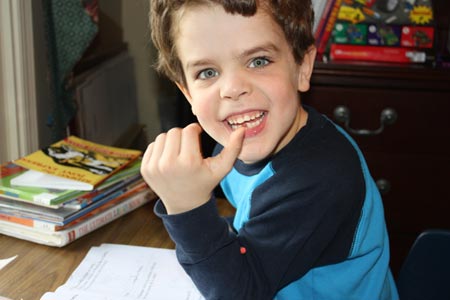 I gather Fireflash is his signature character, as he’s still a frequently drawn subject and the recent recipient of a nifty costume upgrade, as seen here: 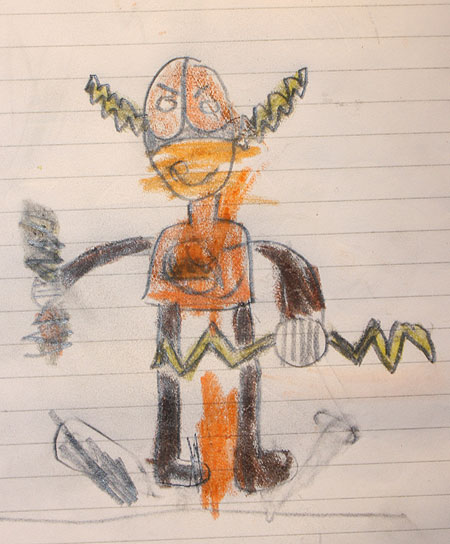 I’m digging the mask and the cocky smirk that marks Fireflash as a wiseguy hero in the Spider-Man mold.  Also I have to say he’s nicely color-coordinated with that orange and brown scheme, and I like the lightning bolt weapons that make him seem almost Zeus-like.

The only potential trouble area is the ear pieces.  To me, they look like decorative lightning bolts or possibly functional Tesla coils, but Laura interpreted them as tufts of hair, giving Fireflash a Larry Fine vibe I’m fairly certain Scott didn’t intend (though he is a Stooges fan, so who knows?).  Also it’s a bit troubling that our hero seems to be stomping some kid’s baseball bat into pieces.

Next up is this awesome action shot of “Laser Lad” punching out a bad guy:

As a fan of the Composite Superman, I’m a sucker for the bifurcated look in comic characters, and Scott pulls it off nicely here by keeping it down to just three colors, artfully applied if I do say so myself.  Actually, it’s interesting how much he reminds me of the Golden Age Daredevil, considering I know for a fact Scott’s never seen him. 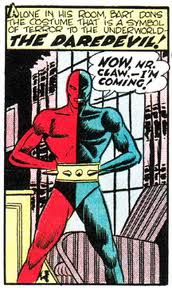 Hey, if you’re going to be a comic artist, you could do a lot worse than to be on the same wavelength as the great Jack Cole.  Also, why has no one else ever used “PUNCH!” as a sound effect?  It’s the ultimate onomatopoeia, yet totally neglected.  Too obvious, I guess.  Again, if I have a criticism at all, it’s that Laser Lad should pick on someone closer to his own size.

Then we have The Unknown: 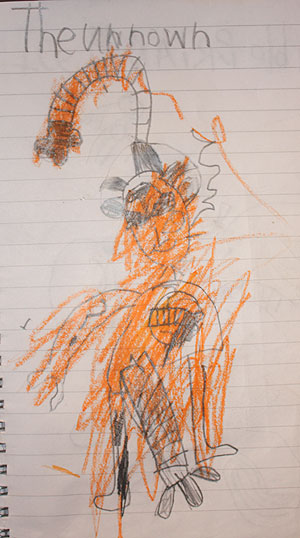 Now, normally you’d associate a name like “the Unknown” with capes and hoods and lots of shadows; you know, stuff that suggests mysticism or at least intrigue.  In this case, I guess what’s unknown is why this guy has a Dr Octopus-like tentacle coming out of his skull, not to mention a second one in easily the most unfortunate location possible.  I can just hear him now, crowing in his best villain voice, “Beware the awesome power of my Third Leg!”  I notice the “coloring” job on this one almost looks more like an attempt to rub out the image, so maybe Scott took a step back and said, “What was I thinking?”

Finally we have Double Brain.  This is the only one I actually asked Scott about, because I couldn’t figure out the meaning of “Juble Brian.” 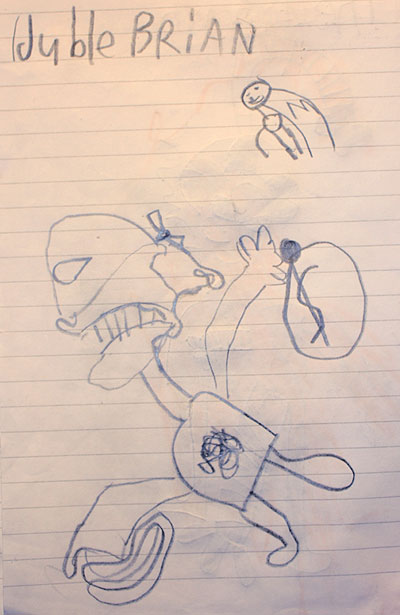 Apparently, Double Brain is not the masked character in the foreground but the flying figure in the distance, breaking up a robbery attempt. Notice the bandit’s mask is tied off in the back; a nice touch.  Not sure what’s in his right hand, though: rubber bands or pickles?

I can’t remember what my drawings looked like at age 6, but I’m thinking Scott’s already ahead of where I was, then.  It’ll be cool if he keeps it up.  And even if he doesn’t, he’s already making more interesting comics than 95% of what’s on the stands today.