Back in the blow-dried, bell-bottomed 1970s, I was one of the millions of little boys who ran around a playground in simulated slow motion pretending to fight robots and death probes as The Six Million Dollar Man.  Nowadays, the miracle of DVD lets me revisit that era again whenever I like, even if sometimes the cold reality of what was actually preserved on film doesn’t nearly measure up to the nostalgia-tinged half-memories I’d harbored since childhood.

Still, I find it can be more fun to watch a 40-plus-year-old TV show than a lot of what’s on now, and it’s certainly more fun to write about it here than to comment on the relentlessly depressing headlines of 2017, so here we go with a look at Season One of TSMDM.

The debut episode of the series proper, “Population Zero” is also a strong contender for its best.

After a strong debut in the original “Cyborg“ telefilm and two misguided forays into James Bond territory in a pair of mostly lousy sequels, Steve Austin finally finds his footing as Harve Bennett (later of Star Trek movie fame) takes the producer’s chair.   Where before Lee Majors had struggled awkwardly with a “suave superspy” routine that ran completely counter to his nature, now we find him re-imagined as an aw-shucks, plain-spoken man of the people, essentially a TV cowboy transported to the disco era.  It’s an approach that will play much more to his strengths. 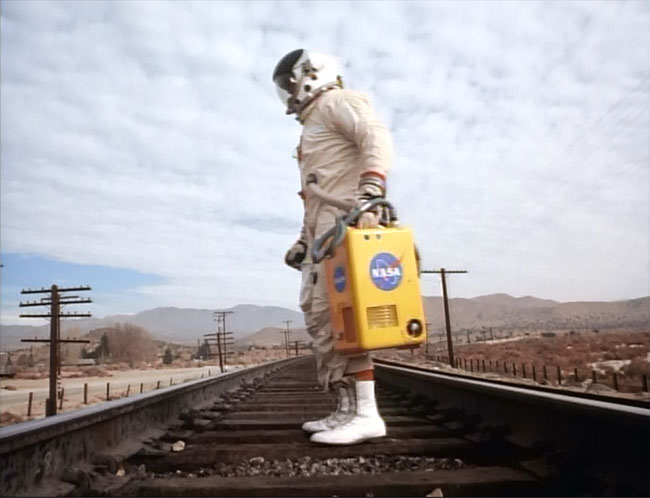 Things get off to a spooky start when the entire population of a small town apparently drops dead in the middle of their daily routines (in a sequence “borrowed” from 1971’s The Andromeda Strain).  Then follows an equally arresting visual as Steve Austin takes an eerie journey through the “dead” town wearing his Apollo space suit, but not before we’re re-introduced to the the formerly glamorous superspy in his new “casual cool” iteration, hanging out in an auto body shop and enjoying the decidedly unBondian hobby of customizing dune buggies (a hobby which, yes, will never be mentioned again in the course of the series, but by golly, ain’t it a “regular Joe” kind of hobby?). 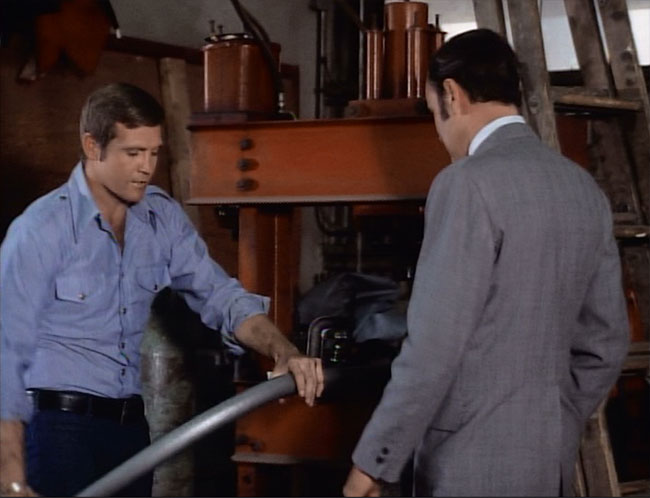 The script is structured to perform “pilot” chores despite the fact that it’s not the debut of either the character or concept, what with three TV movies “in the tank” already.  That’s partly because “Population Zero” actually represents the third “soft boot” of the premise in the space of a year.  Steve Austin started off in “Cyborg” as a rebellious, anti-authority test pilot and “civilian member of the space program,” morphed into a jet-setting Bond clone for the next two films and is now “ret-conned” yet again as a career Air Force officer more at home on a ranch or in a garage than at the roulette wheel of a European casino.

Some of the changes boil down to mere matters of tone, but others rewrite Steve’s history.  For instance, “Cyborg” established OSO [sic] director Oliver Spenser (Darren McGavin) as the architect of Steve’s bionic resurrection, with no Oscar Goldman in sight.  Oscar shows up in the subsequent films as someone who has (or thinks he has) the authority to order Steve around, but may or may not have been involved in making him bionic in the first place.  In “Population Zero,” however, the villain calls the concept of a bionic man “Oscar Goldman’s pet project,” suggesting that it was Oscar who masterminded Steve’s “upgrade” from the start.  This assumption is confirmed later in the series, retroactively erasing Spenser from the mythos entirely. 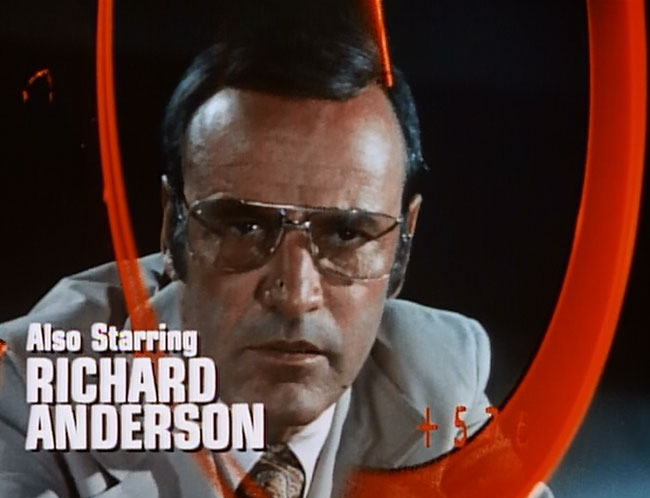 Indeed, in the opening credits sequence aired through all five seasons of the show, Oscar appears to be watching Steve’s fateful crash in real time, which subtly changes the whole dynamic of Steve’s origin story.  In Cyborg, Oliver Spenser tells us he’ll settle for any mutilated test subject (“We’ll start with scrap!”) and Steve’s selection is a matter of random chance and timing.  It’s a whole different story if Oscar already knew Steve before the crash and was the one who arranged his physical rehabilitation.  That alteration transforms the whole scenario from that of an impersonal, military-oriented government project that might just as easily have worked with any old “guinea pig” to more of a humanitarian, medical project, undertaken to salvage the shattered life of a valued American space hero and patriot.  If Oscar really was there at the crash, then why was he?  Was the test plane itself part of an OSI project and if so, is it guilt that motivates him to rebuild Steve?  Was Oscar already an acquaintance of Steve’s and if so was friendship a motivation?  If Oscar was half as dark a character as Spenser, we might even suspect he was there because he engineered the crash as Step One of the Bionic Man Project.

Of course, the real-world reason Oscar shows up in those “origin”-recapping credits is because it’s the easiest way to show us what Richard Anderson looks like when his “also starring” credit appears.  (For the record the footage of his worried gaze is lifted from the “Solid Gold Kidnapping” movie, from a scene that has nothing to do with plane crashes.  But it looks good, so what the heck.)  Anyway, starting with this episode, Oscar is “rebooted” from his previous incarnation as a stuffy, bossy authority figure to be rebelled against, argued with and outwitted into a now-benevolent “big brother” type and sometimes partner/sidekick on missions afield.  He’s a sort of hybrid of “M” and “Dr Watson.”

The “pilot” also establishes that Steve is still trying to come to grips with his transformation into a “freak of science,” a subplot that calls back to the first movie but which will become less important as time goes on, and be a non-issue by series’ end (when being “bionic” is considered so cool, half the kids in America would willingly trade in their flesh-and-blood limbs for enhanced versions).  In a conversation with the villain, it’s further established that Steve’s bionic eye is capable of 20x magnification and that his top running speed is 60 mph. 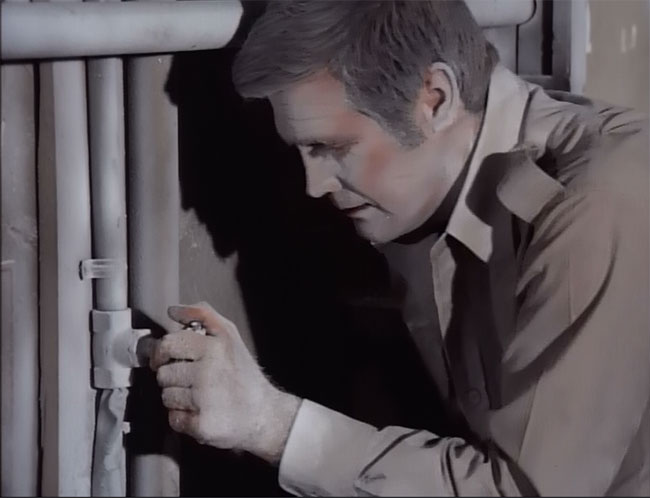 At this early stage, bionic feats of strength are shown minus the famous sound effects we’ll later come to know; instead we usually get the sound of metal creaking under great stress.  At one point Steve makes a bionic leap in silence, which makes it seem more spooky than “cool.”

The high point comes in the last third of the episode.  Steve is placed into a refrigerated chamber because extreme cold renders his bionics inert (introducing a “kryptonite” element to the mythos, though like the buggy-customizing, it’ll ultimately be ignored).  After he escapes (more by brains than brawn), we get a great sequence as Steve races to prevent the deaths of Oscar and numerous assembled extras, stumbling through the desert on bionic legs that are slow to thaw out, falling flat on his face repeatedly only to get up and try again. When he finally does power up fully to run at top speed it’s depicted in slow motion, a seemingly counter-intuitive approach that actually works very well.  Certainly it works better than the more literal approach taken in the earlier TV movies, where Steve is shown zipping along at superspeed like the Keystone Kops.  The slow-motion treatment, partly because it’s accompanied by the sound effect of Steve’s thumping heartbeat and partly just  by the nature of Major’s beefy physique, creates the impression of an unstoppable man-machine barreling towards the camera like a human freight train.  You do not want to get in this guy’s way.  (In fairness, it should be noted that like the “dead town” opening, the slow-mo gimmick was also borrowed from a then-hot property, in this case the TV series Kung Fu.)

Adding to the awesomeness of this scene is the attention to a minor, important detail: Steve is sweating profusely under his left — still human — arm, while his right, bionic arm is dry.

Then of course follows arguably the single coolest moment in the series and the one that exploded the heads of every red-blooded nine-year-old boy in America, when Steve ends the bad guys’ threat as only he can.

It’s safe to assume the villains are very much deceased after this encounter.  Today, Lee Majors likes to promote the show as good, clean fun for the kids with a hero who never kills.  The former is certainly true, but in the earliest episodes, Steve’s not above using lethal force.  In this case, it’s absolutely justified and quite exciting.  Certainly it would have spoiled the fun considerably if the villains had come staggering out of the still-smoking van, coughing and brushing the dust off their tattered clothes, and if this episode had come in a later season, that might’ve been exactly what we got.

Also, just as an aside, note the awesome musical cue provided for the above clip by the great Oliver Nelson, whose jazz-infused compositions constantly elevate this show beyond its low-budget roots to a whole new level of coolness.  Nelson’s untimely death in the middle of Season 3 would be keenly felt, and qualifies for me as a “shark-jump” moment for the series.

So there you have it; the first episode of The Six Million Dollar Man.  After a bit of shaky start, we’re off and running (ahem) with Steve Austin as we remember him.  Next time I’ll take a look at more episodes from the first season.  It’s probably it’s not too much of a spoiler to warn you the quality goes up and down as dramatically as Steve leaps on and off rooftops, but for us kids of the 70s, it was all pure gold.