Note I didn’t say “James Bond Actor Sean Connery,” because by now he’s earned the right to be recognized as an icon in his own right, having long ago climbed out from under the shadow of 007.  In fact, I tend to like him better in non-Bond roles, including his turns in The Man Who Would Be King, The Great Train Robbery, Indiana Jones and the Last Crusade, Outland and The Hunt For Red October. It’s impressive that one performer could be tapped to play such heroic figures as James Bond, Robin Hood, King Arthur and Richard Lionheart over his career.  I still remember seeing Time Bandits on the big screen and when King Agamemnon — after a fierce battle with a Minotaur-like monster — removes his helmet to reveal the face of Sean Connery, a cheer went up.  I didn’t even know he was in the film, but as soon as I saw him, my reaction was, “Well, of course that’s who it’d have to be.” That moment was echoed years later in the last few moments of the truly dire Robin Hood, Prince of Thieves, when King Richard climbs down off his horse and it’s Sean again, to more cheers.  In what was pretty much a cameo appearance, he nearly salvaged that wreck of a film just by showing up.  Almost.

Since the COVID shutdown, I’ve gotten to catch up on a number of Connery films I’d last seen either decades ago or not at all, including Murder On The Orient Express and The Anderson Tapes, The Offense and — easily the best of the lot — The Hill.   And now I’ve got an urge to seek out Highlander.  Even though I came in at the middle of Connery’s career — rife with stinkers like Wrong Is Right, The Next Man and Meteor — I have to say that on balance, Big Tam has racked up one of the most impressive filmographies of any actor since the Golden Age of Hollywood.

And yet, when it comes time to draw him, here I’ve gone and put him in the tux from Dr No.  Ah well.  Here’s to ya, Sir Sean.  I hope it’s  great day and there’s many more ahead of you. 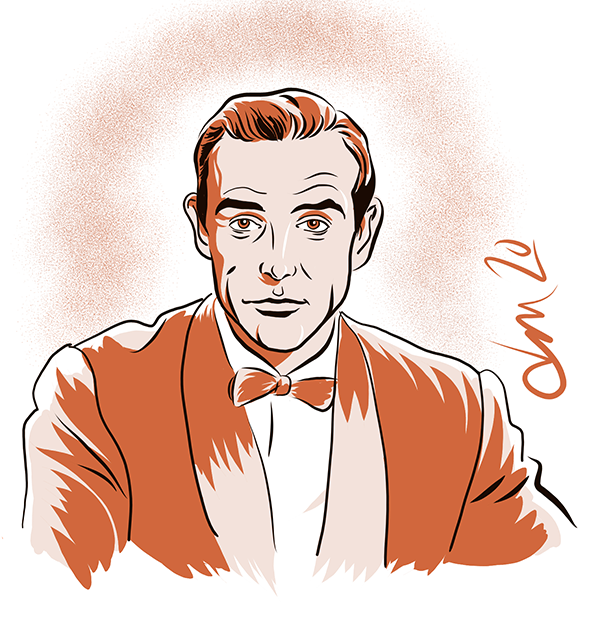