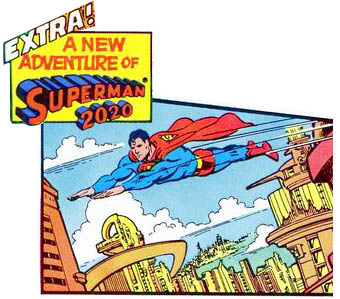 I’ve always been interested in the ways comic books imagined the future, especially when I was living in the “future” in question.  As a kid, I read a reprint of an old Captain Marvel (“Shazam” variety) tale that featured a time traveler from the distant era of 1977.  It was almost 1977 when I read it, and nobody I knew had a time machine.

In 1980, Superman #354 introduced a backup feature called “Superman 2020,” positing what the future might bring for the Superman family 50 years into the future.  This was one of several such features introduced in hopes of generating reader interest in a time when Superman comics were increasingly viewed as old-fashioned and dull by most of fandom.  Another “let’s try anything” back-up feature followed the adventures of a married Clark Kent and Lois Lane on Earth-2, while another examined what would have happened if the infant Superman had landed in Gotham City to become “Bruce Wayne,” not “Clark Kent.”  In the case of “Superman 2020,” we see what would happen if Superman aged in real time, had a son and then a grandson, who operated in the titular year.  In the end, the answer to all three “what-if” scenarios was that, ultimately, a Superman story is pretty much a Superman story regardless of the details.  All Superman stories boiled down to how to creatively use super-powers to combat the challenge of the month, be it earthly criminals, alien invaders, scientific threats or natural or man-made disasters.  At story’s end, the varying iterations of Superman might go home to a bachelor apartment, to the missus, to Wayne Manor, or to a futuristic floating city depending on which version’s in play, but aside from those variations, they’re all the same stories about the same guy doing the same things.

That said, it’s always interesting seeing what comics creators thought life would be like in 2020.  For starters, according to writer Cary Bates and artist Curt Swan, the entire East Coast of the United States would be one sprawling metropolitan entity: 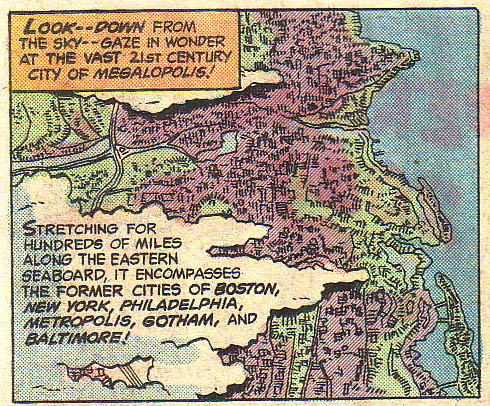 I understand the implied commentary on “urban sprawl,” but it’s hard to imagine something like this working.  All those absorbed cities — and a lot of smaller ones in between — would have to agree to a shared government, which means a lot of mayors, councilmen, boards, planners, etc would have to give up their positions and/or influence.  And think of all the ball teams that would have to be retired! But anyway, it’s an interesting concept.

Even with cities this size, there’s still not enough room for everyone in 2020 given the population explosion, so the city of New Metropolis has been constructed, snow-globe style, in Earth orbit. 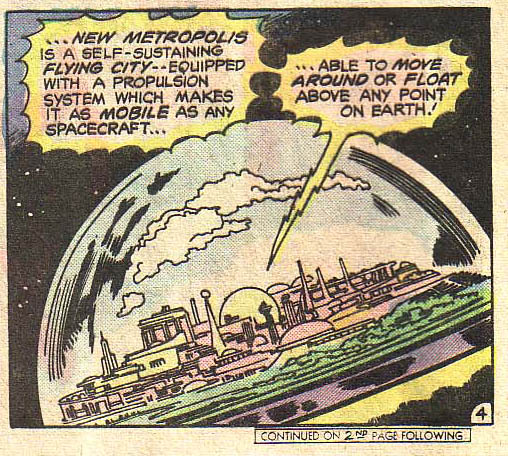 Again, lots of questions about how this could work physically as well as politically (how would a foreign government feel about an American city passing overhead from time to time?) but the interesting take-away is that someone in 1980 could think, even in a comic book story, that we’d progress this far scientifically in just 50 years.  We sure dropped the ball on that.  I mean, iPads and Bluetooth headsets are cool and all, but it’s remarkable how our former daydreams of massive-scale engineering achievements have been surrendered in favor of advances in personalized technology that fits in our pockets.  We don’t get a big bubble over a floating city, but we do get lots of metaphorical little bubbles around each of us, shutting us out from our real-world surroundings, and each other.

Anyway, the hero of our story is Kalel Kent, or at least he goes by that name for about a page and a half.  For reasons that remain unclear, Kalel decides to kill off his “secret identity” so he can adopt a series of new ones.  Step one is to get himself declared legally dead by crashing his “Vexor” flying car (because it’s 2020) into the side of a cliff. 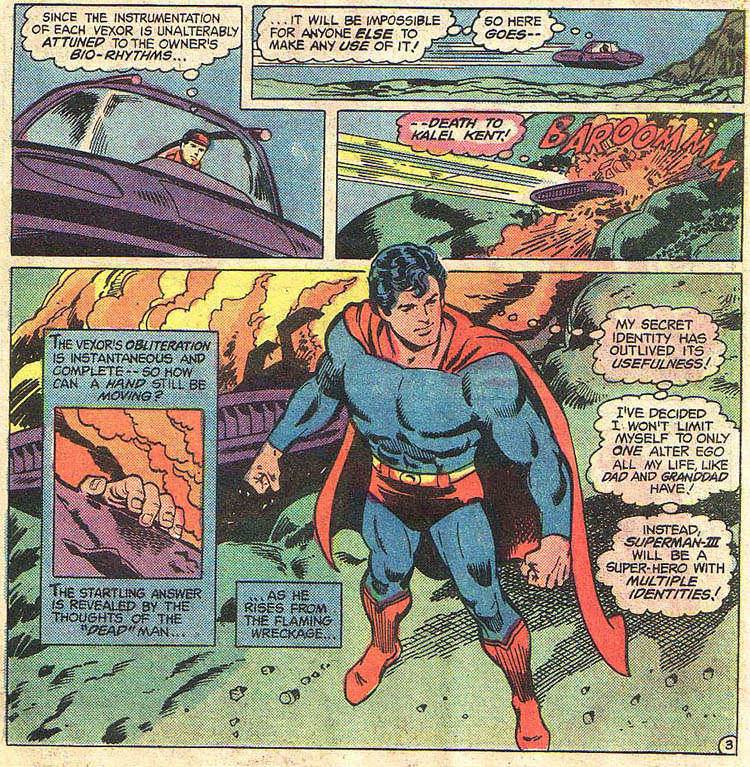 Here we see a time-honored trope of comic book logic: vehicle crashes and burns, someone says “No one could have survived that crash,” and that’s good enough for a death certificate.  Never mind that no body is found.

Also, it’s interesting that for all the starry-eyed prognostications of technological development, no one foresees the future’s higher standards for establishing, documenting and verifying proof of identity.  Kalel is confident he can just make up a new name and start a new career whenever he wants, with no birth certificate, proof of citizenship, diplomas, degrees, certifications, tax records, you name it.  And indeed that’s just what he does for the rest of the series.  In the comic book year of 2020, creating a new identity is as simple as it was in 1400.

You also have to wonder why a revolving door of secret IDs would be a good idea, and really there is no reason whatsoever within the logic of the story.  The reason is rooted in OUR world, where changing things up every couple of months frees writers — theoretically — from worrying about issues of continuity or “sameness”, and the cast of supporting characters, workplaces, etc can change the moment they start to feel stale.  Except, again, a Superman story is a Superman story, and it doesn’t matter much whether he slips away to go on a mission from his job as a reporter, a cab driver, a mailman or a schoolteacher, as this series will eventually bear out.

As you’ll note from the image above, the Superman of 2020 is missing the famous “S” logo on his chest.  That’s because it’s passed down in a formal ceremony from generation to generation, and today’s the day he’s due to get his “badge” from Pa and Grandpa Superman. 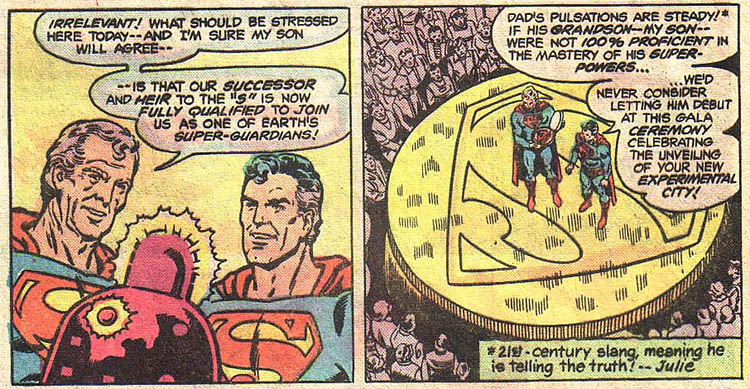 I love that “21st century slang” note from the editor.  Shouldn’t slang be more succinct, or at least catchier, than the verbiage it replaces?

Elsewhere, we see that 50 years of progress has not eliminated evil and small-mindedness from society, as we witness a gathering of “racial purity” zealots in a sort of “Make Earth Great Again” rally: 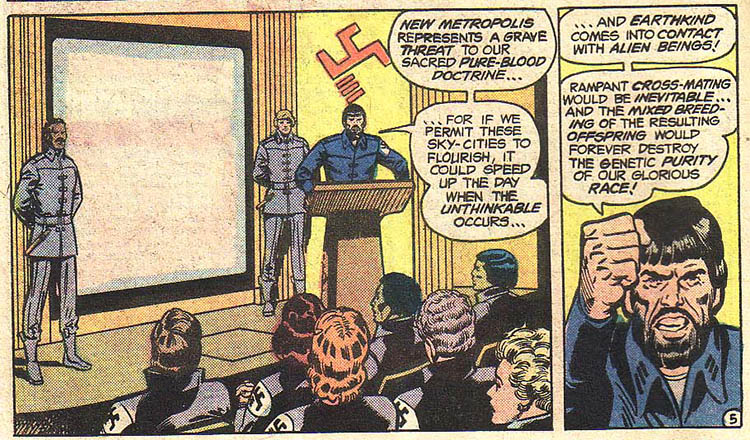 This group tricks the young Superman (referred to here as “Superman III”, because nobody knows yet how bad the movie will be) into following a hologram of his father and grandfather, whereupon he’s trapped in a metallic cube.  In time he will be able to smash his way out, but in so doing, he’ll trigger an explosion that destroys New Metropolis, accomplishing the twin goals of avoiding possible alien contact and besmirching the “Superman” family brand.

The xenophobic “Purists” group adopts a none-too-subtle variation on a Nazi swastika as their symbol, but interestingly their salute rather presciently suggests the controversial “OK” hand gesture that’s become associated with racist ideology in the real 2020. 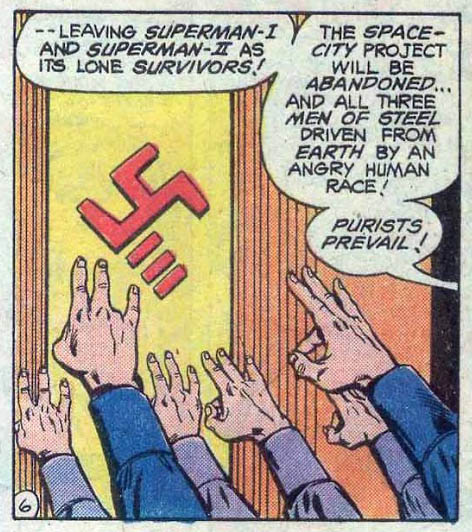 Superman III figures out the plot, emits a supersonic whistle that alerts his dad and grandfather, and then proceeds to hammer away at his cube-shaped trap to generate a morse code message about the hidden bomb in New Metropolis.  His elders hear and decipher this message, find the bomb and remove it, so when Superman III escapes the cube, the city is not destroyed.  You know, the usual perfectly feasible comic book stuff. 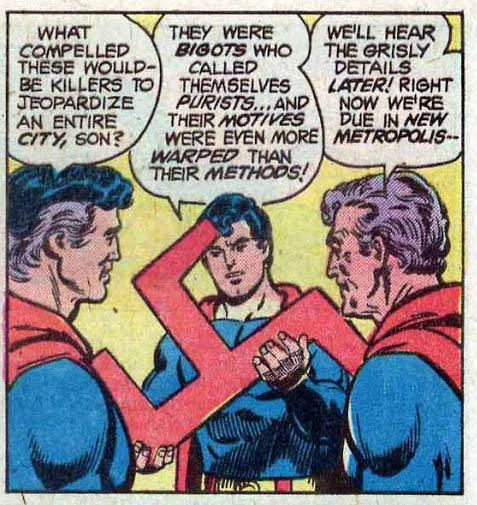 With that settled, the ceremony proceeds as scheduled and Superman III takes his rightful place as a defender of the Earth.

The feature will return for a handful of additional installments, each finding Superman III in a new identity and solving new problems, but again aside from the futuristic cityscapes and fashions, there’s not much to differentiate this strip from “regular” Superman, so it never really picks up any momentum.  Almost immediately Bates and Swan are gone as the strip is handed off to (in my opinion) lesser lights like Bob Rozakis and Alex Saviuk.  Basically, it never feels like more than “filler.”

If anything, I’d rate it even lower than the “Married Superman” or “Bruce Wayne Superman” backup strips because here, there are three Supermen, more or less identical aside from grey hair and wrinkles.  It can’t help but diminish the stature of your hero to make him just one of three, and the least experienced and powerful of the three, at that.  Even when the elder Supermen aren’t featured in a tale, you always know they’re around somewhere to take up the slack if this kid fails.

So if I could tell my 1980 self how close this story came to predicting 2020, I’d have to say not very close on the good stuff (floating cities and flying cars) and too close on the bad stuff (racist movements and neo-fascism).  Probably younger me would be more fascinated to learn I can now read and discuss this story through a computing device connected to the rest of the world. 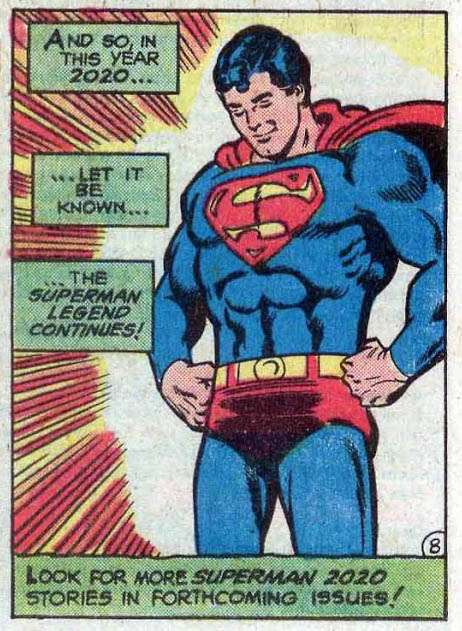