Halloween is nearly here,  and next week brings the even scarier reality of another presidential election, but for me this time of year always brings memories of another annual tradition: the Christmas catalog, or as they were officially known, “wishbooks.”

Many Octobers of my youth were spent poring through the pages of a Sears, JC Penney or Montgomery Ward catalog, marveling at color photos of toys and gadgets and jotting down lists for my parents and grandparents’ consideration.

Growing up in the boonies, I had limited shopping options, so those catalogs were a magical window into a larger world of choices, choices, choices. Who knew there were so many toys in the world?  Not to mention so many possible colors of shag carpeting to cover your bathroom floor and toilet tank?

In those days, the big thrill came with a drive to Richmond and a visit to Sears, where the lawn and garden section was temporarily retired (who cuts the grass in December, anyway?) and filled with toys and bicycles and the like.  But trips like that were rare, while the wishbooks were always an arm’s length away.

I recentlty found the site, wishbookweb.com, filled with digital versions of catalogs going all the way back to  1937.  Looks like I’m late to the game, as it hasn’t been updated since 2017 and still uses a Flash player, but it’s been fun paging through these artifacts and remembering what it was like to read them as a kid. 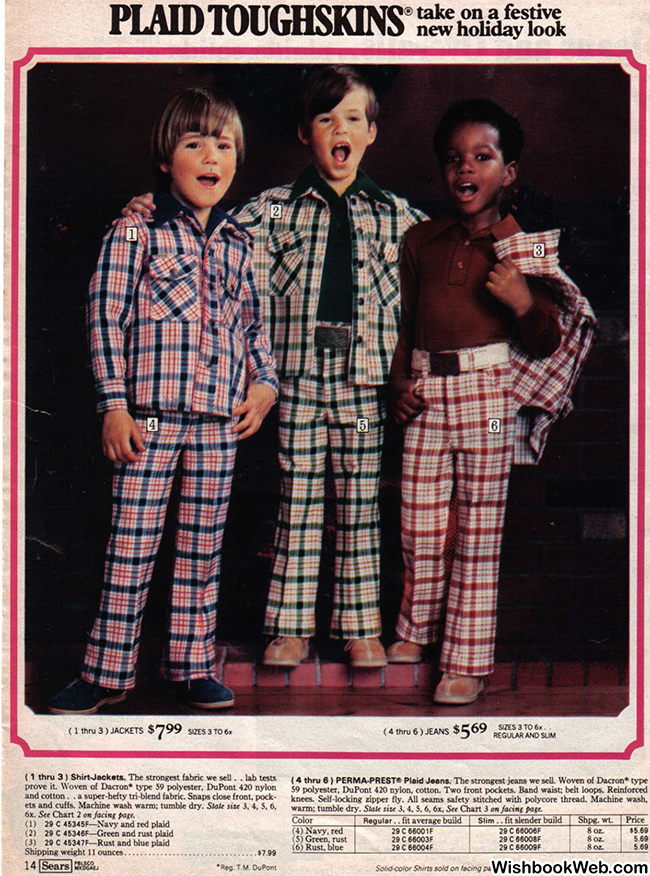 In the clothing (is it even fair to call this “fashion”?) section of the 1975 Sears wishbook, there’s this painful reminder of my wardrobe as a 10-year-old.  I had the green outfit in the middle, or one very much like it (it was green, anyway).  I wore it with the sleeve cuffs turned back so I’d like just like Lee Majors as The Six Million Dollar Man.  The great thing about Toughskins was that they stood up to abuse, so you could run and play in them, and running in slow motion like Steve Austin minimized the potential for grass stains.  Nothing says “70s” like a leisure suit, and it was great that even elementary school boys could get in on the grooviness. 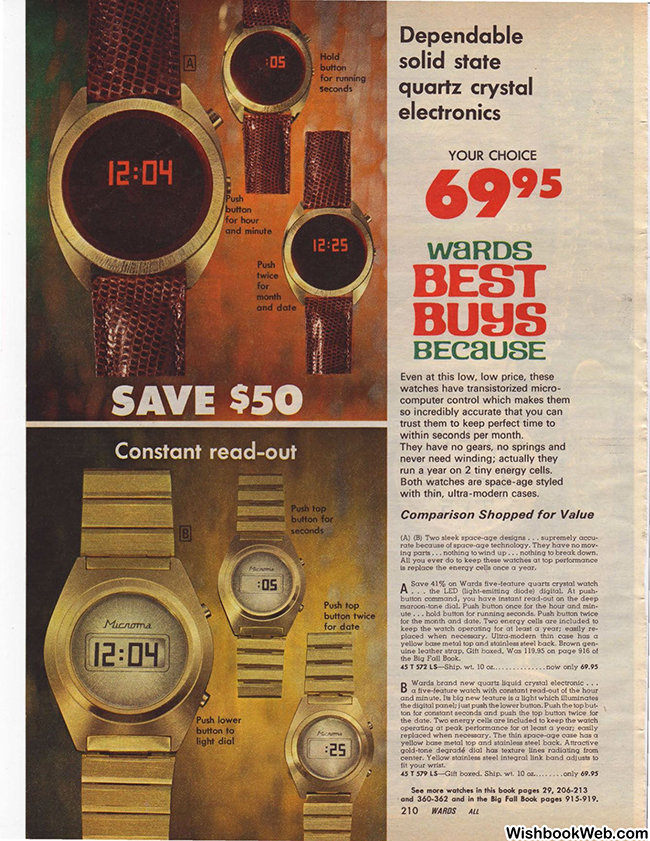 For the grown-up leisure suit wearers, there were digital watches, quite the status symbol as I recall.  Look at the size of those monsters; if you think smart watches are behemoths, consider that these things took up just as much real estate on your wrist and the only thing they showed was the time.  Or if you hit a button, maybe it would change to the date.  I remember a brainy teenager who had a watch where you had to push a button get the time to display.  He took it apart and somehow modified it so it would show the time when he flexed his wrist.  That was cool, but still not enough to justify the price difference between these and my trusty Mickey Mouse analog watch.  According to the inflation calculator, $69.95 translates to $338.41 in today’s dollars, so these were not for dabblers.

The sheer volume of NFL-themed merchandise in the catalogs was always so impressive it made me wish I gave a damn about football.  Just look at all the cool crap I could be accumulating if I had a sports fixation.  Hats, shirts, jackets, scarves, clocks, banks, lamps, blankets, bedsheets, you name it; if it was big enough to slap on a team logo, the NFL was there.  I remember studying the color schemes and logos, trying to decide which one I could adopt as “my team.” Maybe the Raiders, with that pirate-looking guy? Except black and silver wasn’t very exciting.  I liked the Vikings’ purple, but the horns were too “generic” somehow.  The Jets’ green was just fugly.  Green Bay’s colors were okay, but what the heck was a “packer”?  The Steeler’s colors were okay, but I didn’t dig the “sparkles,” and anyway everyone around me hated the team, so it wasn’t worth the risk.  Eventually I realized picking a favorite team based on colors and logos is not the way it’s done, and regardless of how spiffy a jacket I got out of it, it’s not like I’d be any more likely to sit down every weekend and watch 20 minutes of action crammed into a four-hour game.  So I moved on. 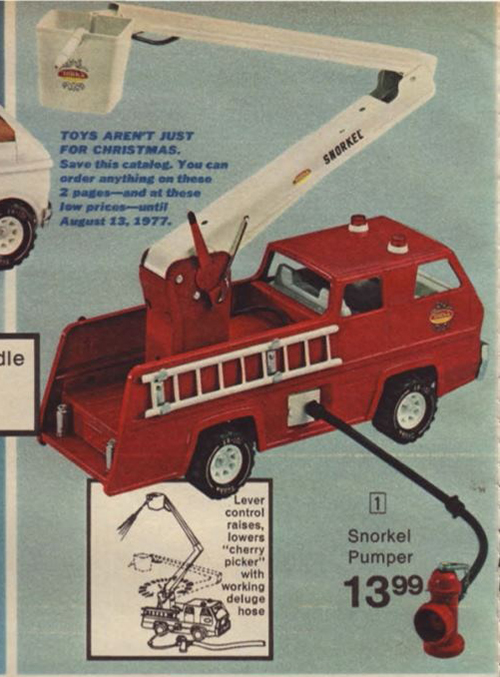 The real appeal of the wishbooks, of course, was the toy section.  This nifty Tonka fire engine provided lots of fun, and in fact still resides in my garage as I write this.  (Not sure if it’s still functional, though.)  In what I still think is one of the cleverest toy designs ever, you could connect a garden hose to that fire plug and squirt water out of the little “fire hose” on the “cherry picker.”  Pretty awesome.  I also held onto a Tonka dump truck and earth mover my brother and I used to drive around in the sand box.  Sand was about all they were strong enough to move, but the frustrating thing about sand is that no matter how long you spend digging, you never end up with much of a hole. 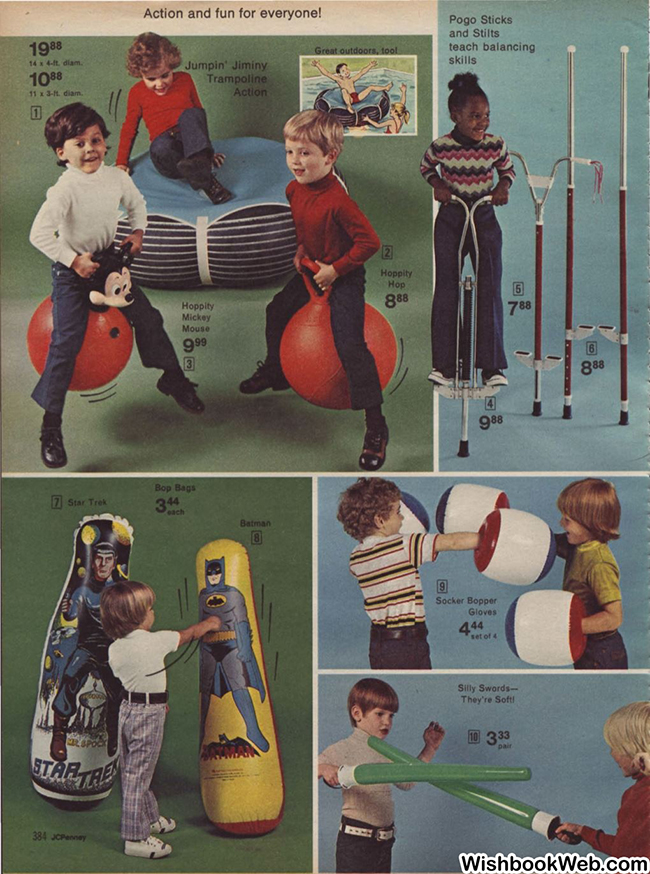 Here’s a page that’ll perplex any kids reading this in 2020.  These are toys we played with outdoors.  That used to be a thing. I had friends with pogo sticks, but I don’t know if they’re even made any more?  Also big in olden times: stilts.  Those ride-on bouncy balls were a big deal, for sure, and if you were going to go for top-of-the-line, you had the one with Mickey Mouse’s head.  I had the Batman “bop bag”, which was cool until you asked yourself, “Why am I  punching the good guy?”  Mr Spock also seems an unlikely object of assault, but it’s cool to see how the Star Trek merchandise was finally taking off some six years after the show was cancelled and still three years out from the first movie.  And those balloon swords at bottom were two years too early: slap a Star Wars sticker on the box and you’d sell 10 times as many. 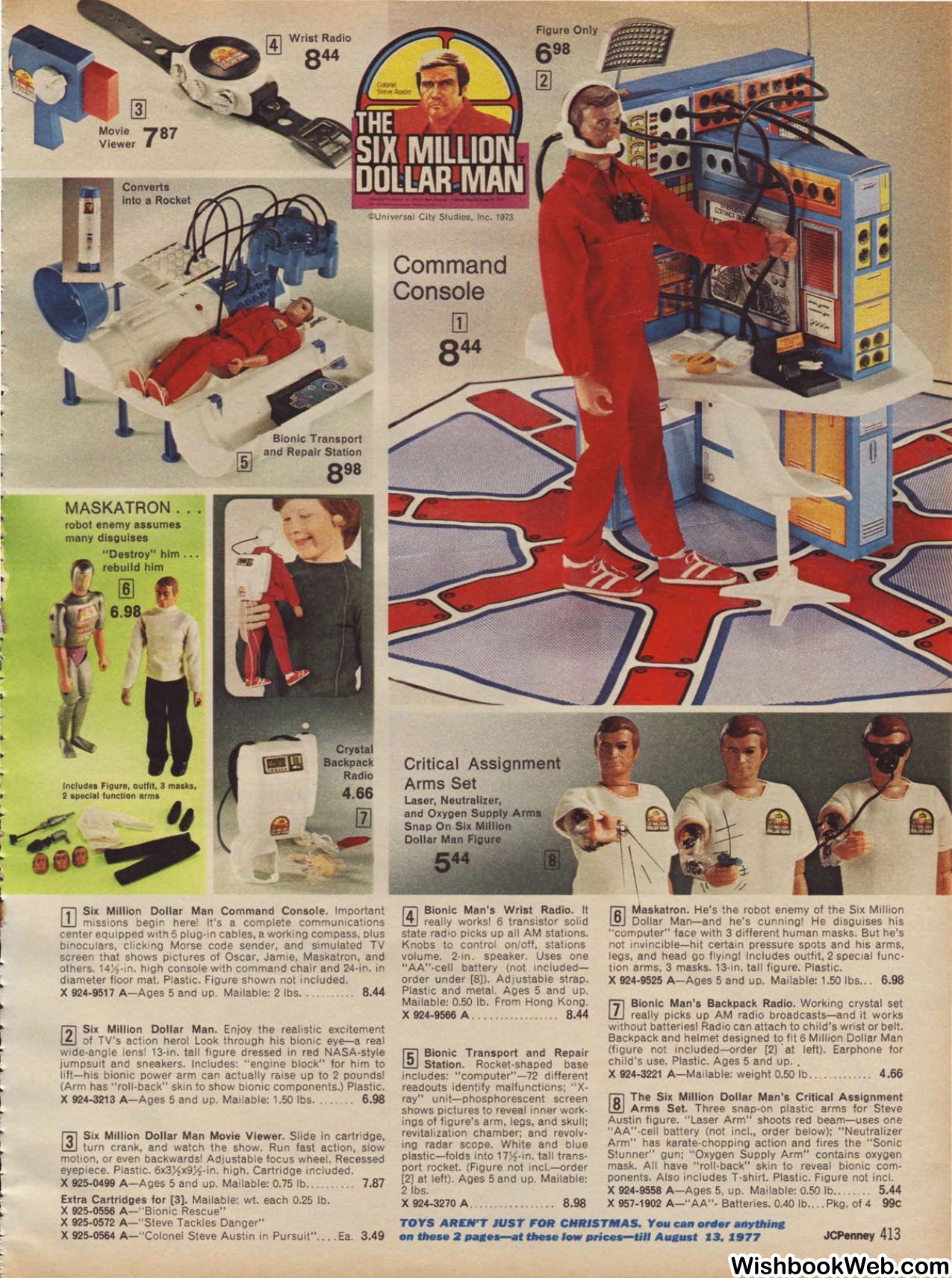 Here’s the biggie, though, from the 1976 Penney’s catalog.  My hero Steve Austin and a plethora of dubious add-ons.  Funny how he could accumulate extra arms, laboratories, side characters and vehicles and yet he never rated a change of clothes.  Actually I think at one point they did offer some outfits for Steve, but I guess they didn’t catch on.  In the red track suit, he’s “the bionic man,” but in jeans and a jacket, he’s just another Leisure Suit Ken.

If there was ever a “Red Power Ranger” or “Tickle Me Elmo” toy in my past, the one thing I HAD to have for Christmas to succeed, it was Kenner’s Six Million Dollar Man figure. Of course my foks came through, and Christmas was saved.  I also ended up with Maskatron, who with all respect to Steve was the coolest figure in the whole line.  I never did get Oscar Goldman, though.  I guess I couldn’t see the utility of a figure who just showed up long enough to say, “Here’s your assignment, Steve” and then walked off.  Maybe if they’d given it the ability to whip off a pair of glasses in astonishment, or yell “Steve!!!” whever the other figure was in mortal danger.

Having mined the 70s nostalgia pretty fully, I’m moving back in time to the 60s to enjoy all the images of Batman, James Bond, Lost in Space and Man From Uncle mechandise.  There’s also the “curiosity factor” of revisiting a time when you could devote six or so pages to working firearms, or different editions of The Bible.

This stuff is best taken in small doses, however.  On my Kindle Fire I can pull back to see thumbnails of the entire catalog at once, and when I do, an ugly thought hits me: the realization that thousands upon thousands of units of all this junk was manufactured and shipped all over the country, where by now it’s either been used up and sent to a landfill or some day will be.  That’s a lot of garbage.  I’m not normally what you’d call an eco-minded sort, but it’s a pretty sobering mental image.