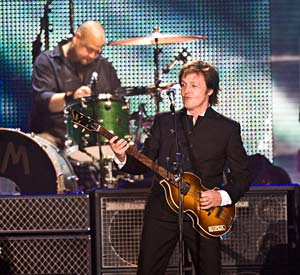 Quite an adventure this past weekend as we journeyed up to D.C.  to see Paul McCartney in concert at FedEx Field. It was a great show, and possibly the biggest we’ve seen in terms of venue, topping Paul’s 1990 gig at the old RFK Stadium on the second leg of his “Flowers in the Dirt” tour.  Anyway it was certainly a better show this time around.

This actually makes my sixth go-round with Sir Paul; incredibly it was 20 years ago I first saw him at Madison Square Garden.  I remember coming away from that one telling everyone how great it was that Paul could rock along at full clip for nearly three hours in spite of his advanced years.  I would have been happy, I said, if they just wheeled him out and he sang “Yesterday” and a couple more tunes for 30 minutes or so.  The funny thing is, Paul was 47 years old at the time.  Hard to believe I was once so young I thought 47 qualified as “old age”, but then again before Paul and his generation we didn’t really have many examples of rock artists plugging along into their pension years;  Elvis croaked in his mid-40s, so it was up to the Stones and ex-Beatles and such to define the Rock and Roll retirement age.  Still is, really.  Where do you cross the line from being a rocker to occupying one?  For the record, though, if anything Paul today is just as energetic as, and certainly in better voice than two decades ago.

A few other things have changed.  The “programs” at the merchandise booths are up to $25 now and are really just picture books.  At the ’89 show, they handed you a free program on your way in and it was full of pictures AND articles (though, to be fair, there were also lots of ads).  And during the ballads, the traditional sea of waving cigarette lighters is gone (smoking’s not allowed these days you know), replaced by the tiny blue pinpoints of waving camera phones (which didn’t even exist at that first show).

Of course Sir Paul’s seen a lot more changes than I have.  Over 40 years ago, DC was the first venue the Beatles ever played in America, and they did it “in the round,” with their audience on all sides.  Throughout the set it was up to the Fab Four themselves to pick up their amplifiers and Ringo’s drums and turn them to face the fans that had been behind them for the last few songs, then a few songs later turn it all back again.  McCartney mentioned on Saturday night that at that first gig, the girls screamed so loudly the band couldn’t hear their own music.  “This time,” he assured us, “we’ve brought bigger amps!” 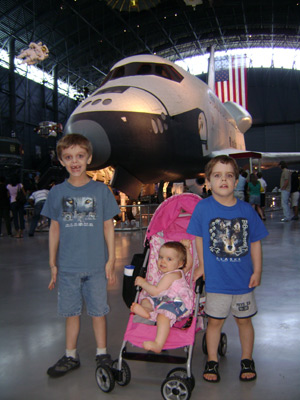 We were only able to attend the concert because my parents agreed to come up with us and watch the kids at the hotel, which was really cool of them.  On Sunday, we continued the “Wings” theme of the trip with a visit to the Udvar-Hazy annex of the Smithsonian’s Air and Space Museum, located next to Dulles Airport.  It was more impressive than I expected, with tons of aircraft from all over the world and all periods of history; personal faves included a WWI Nieuport, a WWII Hawker Harrier, a gleaming silver Pan Am Clipper and an SR-71 Blackbird.

The “Enola Gay” was there, the only aircraft with a plexiglass shield between it and visitors, possibly as protection from protestors (I remember there was considerable controversy when its inclusion was announced). It was especially cool to finally see an actual autogyro, that staple vehicle of pulp heroes like Doc Savage and the Shadow, and a Bell Jet-pack like the one in “Thunderball.”  Somehow they even crammed in a Concorde and a space shuttle.

The space stuff was the highlight for the kids, naturally.  Jason in particular is fascinated with astronomy and space travel right now, and Scott loves rockets.  Grace was just grateful to get out of the car; traffic in DC is a nightmare.  In fact it took us four hours to get up there on I-95, and the concert was delayed by an hour because half the ticket-holders were stuck in a snarl-up at one of the 395 exits.  So we’ll think long and hard about going back anytime soon.  Still fun once we got there, though.