Well, the downside of moving your site to blog format is that you’re kind of required to add a post now and then, a responsibility at which I’m proving to be woefully remiss.  In the interests of catching up quickly, here’s a few notes about what’s been going on in our lives:

First, the weather here in Richmond is flat out nuts.  It was unusually warm for much of February, then we took a big dip in temps (down to single digits at night) and had about 11 inches of snow dumped on us on the first of March…our first significant snow in over four years.  By the end of that same week, the temps were up in the 80s.  It’s pretty weird to be sweating in short sleeves when you have piles of snow still lying around in parking lots. 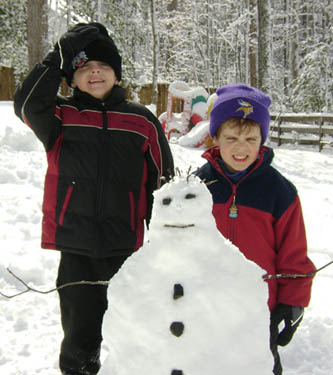 Jason and Scott were excited to build their first snowman, whom they named “Andrew.”  Grace watched Andrew’s construction from the kitchen window and was desperate to come out and help, but seeing as she had a cold, we kept her in.  Andrew aside, the snow lost its appeal for the kids after a couple of days and they were glad to see the warm weather return.  So of course today it’s snowing again.

Grace is 6 months old now and doing great.  She can sit up by herself and roll over from front to back.  The other day she was rocking forward on all fours, so crawling can’t be too far off.  She continues to be a joy to be around, smiling pretty much all the time and breaking into song when she’s really happy.  This week she’s started eating rice cereal and it seems to fill her up enough to sleep through the night, which is great for Laura.

Scotty went in for his 4-year checkup and got a clean bill of health.  He’s coming along with his reading and math, and loves playing with his “Leapster.”  Jason is enjoying his classes at the Richmond Indoor Sports Experience complex, where he’s learned about soccer, basketball, dodge ball and lots of other sports.  He’s very excited to have actually won a couple of foot races against his friend Liam in recent weeks.  Maybe it helps that he wears his red sweat pants and matching “Flash” t-shirt.

Laura’s been teaching finance classes again twice a week at VCU.  She enjoys getting out of the house to interact with students and talk about subjects she enjoys (and which are beyond my ken).  She’s lined up for some summer courses as well.

That’s a quick update.  I’ll try to post more things as they come up.  Sometimes it seems like every day brings some new funny pronouncement from the boys, or milestone with Gracie, and if I don’t record them right away I forget them, so I promise to do better.