Time Served With the Prisoner 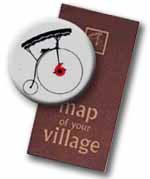 Considering it combines two of my longtime interests — science fiction and espionage — you’d think I’d have devoured “The Prisoner” TV series long before this, but I’m only now getting into it.

One reason for my late participation, no doubt, is the infamous reputation of the show as insanely complex and multi-layered, and the reported necessity of watching the episodes in sequence. That’s made it a bit intimidating to even attempt starting the show without some guarantee I could finish it. Finally, through a friend in the UK (thanks, Ian!) I have all 17 episodes in hand now and I’m working my way through them.

For the unitiated, “The Prisoner” tells the story of an unnamed secret agent who resigns his post, only to find himself incarcerated in a quaint village full of oddball characters, all with numbers instead of names (our hero is assigned the Number 6). Life in the village is pleasant enough — if weird — but escape is impossible thanks to a killer beachball (well…?) named Rover that tracks down fleeing villagers and drags them back again. The mysterious powers behind the village (Number 6’s enemies? Or perhaphs his old bosses?) make repeated attempts to break down our hero and get him to reveal why he quit the spy biz, but as he’s the hard-headed type, and fiercely individualistic, he strongly resists assimilation.

So far my favorite episodes have been “A,B and C” and “The Schizoid Man.” The former finds Number 6 drugged against his will on a nightly basis, his dreams monitored by his captors for clues to his resignation. Twigging to the plot, he turns the tables rather neatly, taking control of his own dreams and leading his captors on a wild goose chase. The latter presents No. 6 with a novel foe…himself. The head man in the Village, No. 2 hires a dead ringer for No. 6 (dubbed No. 12) and has him impersonate our hero. For good measure, the real No. 6 is drugged and put through an elaborate brainwashing course to convince him that in fact it is he that is the imposter, sent to break the other (fake) No. 6. 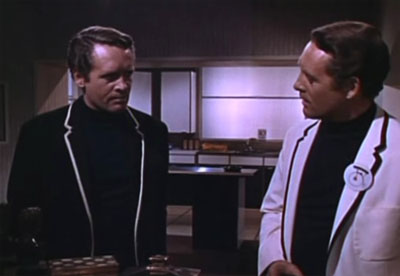 Yes, that’s pretty complicated, and a bit silly, but it’s all pulled off with skill and not a little suspsense by the makers of the show. Series star Patrick McGoohan gets special kudos for pulling off several convincing portrayals in the course of the episode; the real No. 6, suddenly stripped of his character-defining self-confidence, searching desperately for a way to prove his true identity but starting to doubt it himself; and No. 12, the doppleganger who is more No. 6 than No. 6 himself, matching his self-confidence and individualism and escalating it to the realm of outright arrogance and smarm.

I’ve always been fascinated by shows like this, where stars are asked to play not only their usual role, but another person impersonating him in that role. Bill Shatner made a sub-specialty of this sort of thing in “Star Trek,” for instance. The little quirks, the tics, the signals to the audience that now you’re watching the real one, now the fake…this sort of thing must be great fun for an actor.

From a technical standpoint, things are handled quite well with nearly seamless process shots and some inventive staging. At one point, one No. 6 offers the other one a light for his cigar, and it was only on a second viewing I realized they never intrude on each other’s half of the frame. The whole thing is timed and played so well, you’d swear the two McGoohans did touch on screen at least once in the episode. Just timing this sort of thing; shooting once as one person, a second time as the other, and then stitching it together smoothly is the sort of thing you’d think would give a film editor nightmares.

It’s probably not spoiling anything to reveal that No. 6 does not escape the Village…it’s only the fifth episode after all…but I’m already fascinated by how much mileage they’re getting out of a set-up that you’d think would be more limiting. What’s really interesting is that McGoohan and company found a way to create drama and suspense in a format constrained by 60s TV morals. Shorn of the ability to rack up a body count, 007-style, No. 6 nonetheless keeps things interesting with battles of the mind; the will of the individual versus the forces of authority. Heady stuff, which I’ve no doubt will continue to prove interesting as I go on.

Until then, be seeing you!