As noted in an earlier post, the highly-rated (and Hugo nominated) TV movie adaptation of Martin Caidin’s Cyborg aired in March, 1973, selling its audience on the outlandish notion of a half-mechanized superhero and launching the 70s cultural phenomenon we knew as the “Six Million Dollar Man.” The challenge faced by its inevitable sequel films, Wine, Women and War and The Solid Gold Kidnapping, was more prosaic but in some ways more daunting: Now that we’ve got a working cyborg, what do we do with him?

The most obvious solution was to turn Steve Austin into America’s answer to James Bond, the “clever” twist being that where 007 lugs around a cache of hi-tech gadgets, Austin himself is the hi-tech gadget.  And so in the two sequel films, the accent is on international intrigue, diabolical masterminds and glamorous babes.

Wine, Women and War opens in Egypt, and clues us in immediately that Steve is a secret agent because he’s wearing a tuxedo and sending signals with a pen light. 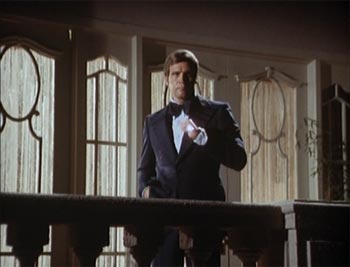 Apparently it’s a bionic pen-light, since the previous shot established that Steve is standing on the balcony of one of many high-rise buildings in a brightly-lit city, and yet his signals are seen and read by observers on a U.S. submarine parked miles away in international waters.

Slipping out of the tux to reveal a wetsuit (reversing Bond’s striptease in Goldfinger), Steve uses a miniature rebreathing device (Thunderball) and swims out to a bad guy’s yacht, where he uses his night-vision-enabled bionic eye (replaced by the familiar “telescopic” model in the later series) to locate a wall safe and then escapes by swimming at torpedo-speed to the waiting sub.

Recuperating from his adventure in a high-security wing of a Washington hospital, Steve has a prickly chat with his handler in the OSI, Oscar Goldman.  This is our introduction to Oscar, the replacement for the more openly cranky, thoroughly unscrupulous and consequently much more fascinating Oliver Spencer character in Cyborg (played by Darren McGavin, who by the time of this film had moved on to The Night Stalker).  In contrast, Oscar comes off as merely shifty and vaguely disreputable, a typical government “suit” who uses phrases like “need to know” and, with Richard Anderson’s perpetual tan and then-stylish eyeglasses thrown in, seems fairly smarmy to boot, like a middle-aged swinger. 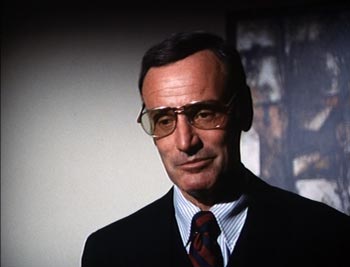 Over time, Oscar would ostensibly evolve into a more charming and endearing character, as much a buddy to Steve as a boss.   Personally I never fully warmed to him, with his annoying habit of calling Steve “pal” and later his even creepier insistence on calling Jaime Sommers “babe,” which besides qualifying as sexual harassment (he was her boss, after all), also felt like a personal betrayal of Steve, the guy we all knew was meant for Jaime.  Some “pal!”

Anyway, at this point, the “friendship” hasn’t yet evolved, and Steve makes it clear he doesn’t care for his new line of work or his oily new boss.  Undaunted, Oscar uses Steve’s friend Harry Donner to help him manipulate the bionic man into traveling to the Caribbean, where he’ll be drawn into the mission Oscar wanted him on in the first place.

On what he thinks is a vacation, Steve acquires a female companion named Cyn, and as they enjoy a game of golf, Steve accidentally hits a ball hard enough to send it practically into orbit.  Pressed to explain this seeming impossibility, he deadpans, “It’s all in the wrist.” 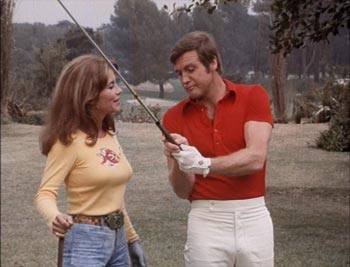 Thus begins a long tradition of one-liners aimed at explaining bionic feats to incredulous onlookers.  In the previous film, Steve was still traumatized by his accident and uncomfortable with his new cyborg status (to the point of attempting suicide!), but from here on in, he’ll seem to cope fairly easily with jokes like this.  A better line, and one with more of an edge to it, comes when Cyn calls Steve out for being cranky and asks what his problem is.  “The doctors say I’m not all there,” he answers.

That night Steve and Cyn visit a casino, or more accurately stand in front of the camera and look down at an imaginary roulette wheel, as the “casino” exists only in the form of stock footage from the Universal archives.  By now it’s becoming obvious why the “Bond” approach didn’t pan out for this show: despite the logic of using America’s bionic super-weapon for international espionage,  the hard truth is you can’t do a James Bond movie on a TV movie budget.  Steve may be worth six million dollars, but with Universal controlling the purse strings, he’s strictly a poor man’s 007.

On the other hand, the wardrobe is pretty impressive.  Take for example the timeless allure of this classy dinner jacket: 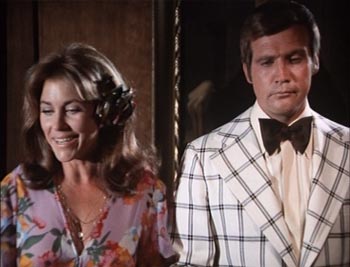 The other ingredients in the Superspy Stew include a Soviet scientist/official played by The Man from UNCLE’s David McCallum, a nefarious arms dealer and Blofeld-wannabe called Arlen Findletter (played by Eric Braeden of Rat Parol and Young And The Restless fame) and Russian hotty Katrina Volana, played by Britt Ekland, a  mere year before her turn as a proper Bond girl in The Man With The Golden Gun. 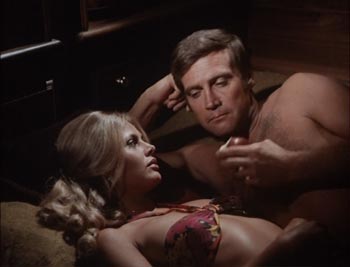 Okay, so Findletter has an arsenal of nuclear missiles for sale, the USSR wants to buy them, and it’s assumed Steve (whose known association with Oscar Goldman brands him a spy) was sent to bid on behalf of the Americans.  Steve is held on the boat to keep him out of the negotiations, but he ties up Katrina and makes his escape with relative ease. 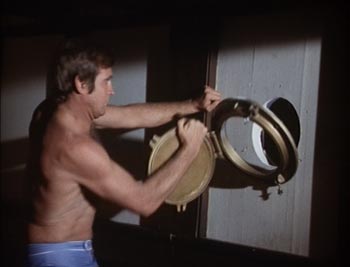 This leads to a rather unfortunate Bondian quip as Steve — about to jump overboard — tells the bound and gagged Katrina, “Sorry to violate your porthole,”  no doubt eliciting a groan even from Roger Moore.

By now, Steve’s in the thick of things whether he wanted to be or not, and soon enough he ends up in Findletter’s secret missile storage facility, represented by what must be noted is a pretty darn good matte painting for TV of the day: 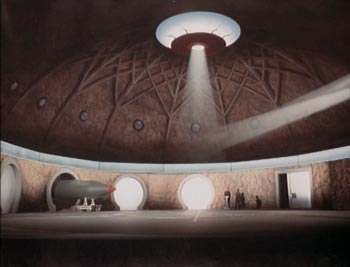 Steve saves the girl (but not his Russian buddy McCallum) and booby-traps Findletter’s Polaris missile before making an exit through a convenient escape hatch.  As they climb from the subterranean missile hangar to the surface, Britt delivers a convincing Bond girl audition with  with classic lines like, “I’m tired!” and “I can’t go any farther!”  while Steve shouts up encouragement from beneath her, probably wishing this could at least have been a “bikini” scene.  When they reach the top (the exit hatch opens onto a cemetery), Steve exits first — meaning he’s somehow managed to pass Katrina on the ladder (a neat trick) — and gives her a hand up. 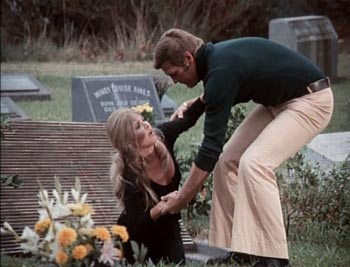 Steve takes Katrina in his arms and breaks into a run.  As it’s still early in the game, we haven’t yet settled on the “slow motion” effect for bionic feats, so instead we see Steve hustling along in fast motion.  This is just as well, as Findletter has finally triggered Steve’s booby-trap and set off the Polaris missile’s warhead, triggering a nuclear blast.  Oops. 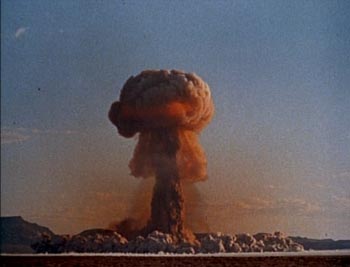 And that’s the end of Mr. Findletter.  Along with all his flunkies, his home, the homes of his neighbors and anyone in them, not to mention anyone unlucky enough to be passing through the area at the time, probably a few local businesses, schools, hospitals, etc.  But luckily not Steve and the girl, who are huddled behind a nearby hill, entirely safe from atomic fall-out.  And so ends our tale, but James Bo…I mean, Steve Austin will return.

Which he does in The Solid Gold Kidnapping, involving (as the title implies), the kidnapping of a highly placed US diplomat who may be the key to world peace. Still in 007 mode, Steve is vacationing at a ski resort with a beautiful girl when he’s called to action by Oscar Goldman and — in a really weird turn — paired with a lady scientist (Elizabeth Ashley) who’s volunteered to have the brain cells of a dead bad guy transplanted to her own brain so she can “see his memories” and find the kidnap victim.  Don’t ask.

Aside from a wall-smashing rescue at the beginning of the film, there’s very little in the way of “bionic” action in this one.  Steve is essentially a generic superspy who only occasionally does something too “super” for a “mere human,” like opening a stuck door (I kid you not) or seeing in the dark with his infrared eye (something any spy character could’ve done with a handy gadget). 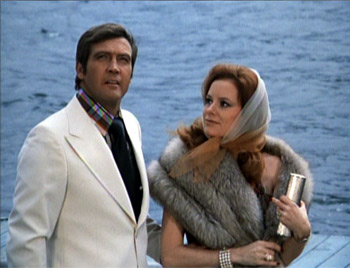 Much more overtly promiscuous than his later “series” self, Steve wastes little time getting the countess into bed, only to wake up the next morning to two consecutive assassination attempts (probably engineered by the countess, but it’s hard to tell as shot).  In the first attempt, Steve is shot at (and hit! Oops!) but escapes his attacker by opening a door on him (it’s not really clear whether this qualifies as a bionic feat).  Then follows what I have to assume was meant as a more exciting sequence, as Steve engages in a speedboat chase brazenly lifted from  Live and Let Die (barely a year in the past at this point), ending dramatically (?) as Steve pushes on his boat’s throttle so hard he breaks it off, which, true to little-kid logic makes the boat go ULTRA-fast. 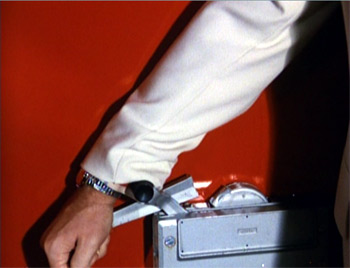 After that, it’s just a matter of Lee’s stuntman jumping overboard so the boat can slam into that of the baddies, triggering a deadly explosion.  Or rather, a stock Universal Studios “explosion” optical super-imposed over the boat footage.  After all, if they don’t return the boats after filming the rental agency will charge them more than the film’s entire budget. 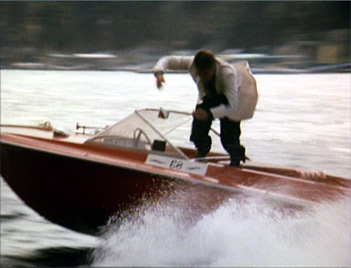 Ultimately, Steve locates the ship where the US diplomat is being held and stages a one-man rescue, which again is pretty short on the bionics.   Here at last we break away from Bond formula, though not for the better; where 007 ends his adventures with epic raids and the explosive destruction of villains’ lairs, Steve simply slides across a table top to knock over the movie’s chief villain, played by Maurice Evans. 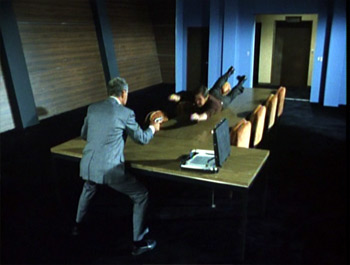 That’s right, Steve’s ultimate adversary here is Samantha’s dad from Bewitched, making for arguably the most suspense-starved grudge match since Godzilla vs. Bambi.  Maybe it would have been a smidge more thrilling if they’d put Evans in his Dr Zaius make-up from Planet of the Apes. 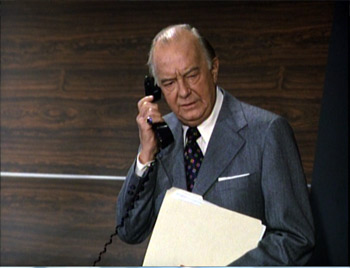 And so ends Steve Austin’s career as a 007 wannabe, not with a bang but a whimper.  As noted,  it’s pretty hard to compete with James Bond on a TV budget, but somehow it might still have worked with a different lead actor.  Ultimately a huge share of The Six Million Dollar Man‘s success came down to its star, Lee Majors, but the “international playboy” routine simply did not play to his strengths.  Majors seems much more comfortable in jeans than tuxedos, drinking beer not champagne.   He’s much more cowboy than superspy, and when producer Harve Bennett signed on for the weekly series, he recognized this, making the character more Gary Cooper and less Cary Grant.
Neither of these films has the gravitas or creepy-cool appeal of the first one, or the charm of the later series, but they’re entertaining in their way, and if nothing else, offer an intriguing hint of where the concept might have gone in different hands.