The Kids Are Alright

Well, better than alright, really, but this way I get to invoke a catchy song title.

Scott just celebrated his 13th (!) birthday and he kept it a pretty low key affair, hanging around the house with Grandma (visiting from Ohio) and not asking for much in the way of presents.  This despite the fact that before the holidays it looked like he wanted an electric guitar, electric base, amplifier and a keyboard, all at once.  He ended up going for the keyboard for Christmas and has really been enjoying it, but he cooled on the other items, or maybe he’s just eyeing some particularly high-end versions he knows he’ll have to wait for.  Anyway he continues to dazzle us with his piano skills and amassed quite a pile of sheet music to master, from Chopin to Billy Joel to Scott Joplin to Queen.

Grace got to ride a horse recently at a birthday party and had a blast, even if it was only 25 degrees outside at the time.  I had to loan her my gloves because she forgot hers, which was fine until she fed a horse a carrot and got knuckle-deep in slobber.  She also has a decided flair for the dramatic, and a healthy imagination.  I heard her playing with her Barbie dolls when Barbie gave Ken a mighty slap, yelling, “Get out!  Just GET OUT! Nobody proposes to me when I’m already married!!!”  Recently I was driving somewhere or other and heard her making up a song in the back seat.  I don’t remember it all, but these lyrics were a highlight:

But not ’til I got to the bottom of my Boy List.

Jason’s impossibly tall now; taller than me, I think.  He’s been making money at his various chess jobs, teaching at local schools and doing some private tutoring on weekends.  It all goes back into chess again to cover tournament entry fees and hotel stays, but he seems to enjoy it.  He’s already making plans for what to do with his time after he completes his Eagle Project, but so far as I know he still hasn’t even picked a project to do.  Details, details.

While storing all the Christmas decorations in the garage, I kept finding a large, collapsed cardboard box in my way, as it has been for what feels like forever.  I finally decided that whatever I was keeping it for, I didn’t need it any longer, so it was time to chuck it.  Halfway through slicing it up with a box cutter, my sense of satisfaction melted to sadness and shame when I spotted a word scrawled in ballpoint pen by a much younger Jason: 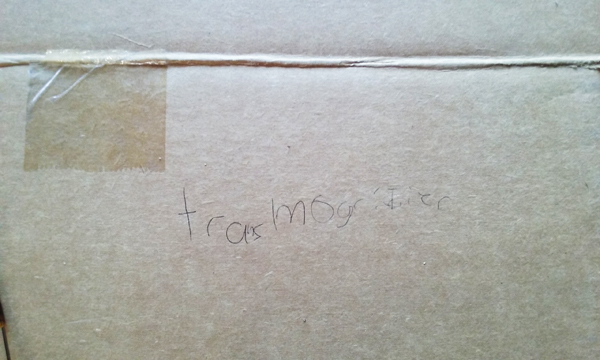 It’s hard to make out in the image, but that’s “Transmogrifier,” as in the magical device used in “Calvin and Hobbes” to change little boys and their tigers into all sorts of amazing things.

Now I feel like a heartless brute, but at least I held onto that one last piece.

It never gets dull with three young kids in the house; new adventures and challenges pop up with such speed and regularity that it’s easy to just concentrate on living in the moment.  Then comes the occasional sobering reminder of just how quickly time is slipping by, and how much things change.  The young Jason who climbed into his Transmogrifier seems as distant and ghostly now as the ancient Egyptians, and that messy inscription seems as precious as any archaeological find.  I’m imagining a third panel to the strip above, with an adult climbing out of the box.  Sometimes it feels that fast.

In the end, though, there’s nothing for it but to rededicate yourself to enjoying each moment while you have it.  The fun’s not over yet.