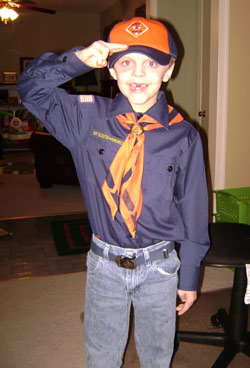 We signed Jason up for the Cub Scouts last month and so far he’s really digging it. Oaths and pledges to memorize, handshakes and salutes to learn…right up his alley. So far he’s completed all the requirements for his Bobcat badge and he’s plugging away at the Tiger requirements. The only downside is the uniform and supplies are pretty pricey.

We joined a pack that’s geared to home-schooled kids, which works out nicely as it gives the boys something in common right off the bat, and provides opportunities for them to socialize and work cooperatively with their peers, which they might not get otherwise.

Jason knows I was in the Scouts, so he asked me one night about being an Eagle. I reminded him I only made as far as Webelos, but explained that Eagles usually take on a special project, usually involving building something. He said that was great, he could build his flying car (I should mention here Jason’s long-range plans include making a fortune by inventing a flying car). I told him no, usually it was something you could build with your own hands, something that benefits other people, like a lean-to we saw on a long trail down at the Virginia Aquarium (a sign identified it as an Eagle Scout project).

“Oh,” he answered. “Like a ramp for somebody in a wheelchair to get in and out of a place.” Bingo. Three weeks in the Cubs and he’s already got his Eagle project all lined up.

At last night’s meeting, the Den Leader asked the boys to consider creating a skit for the upcoming Pack Meeting. When he asked what they were interested in, Jason answered “space!” and the other boys all agreed. So they were divided up into camps; two astronauts and the rest “aliens.”

“Now we need a planet to go to,” says the Den Leader. “Which one should it be?” “Jupiter!” suggests someone. “Okay, so you’re flying your spaceship when suddenly you’re hit by a meteor, and you crash on Jupiter…”