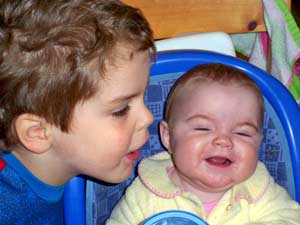 Scott hit a milestone this week; he learned how to swing himself on the swingset.  Luckily, I’d just managed to replace the old plastic stakes (which never stayed in) with some new metal, screw-in anchors.  Between our boys and the neighbor kids, the swingset was lifting alarmingly high off the ground when in use.

A lot of attention is given to learning to ride a bike, but I’ve been surprised to see what a milestone the first solo swing can be.  I must have gone through the same thing myself, but so long ago I don’t remember it.  It’s very liberating not to need an adult (or solicitous older sibling) around to get you going, and Scott’s pretty proud of himself.

Scott’s also demonstrated a willingness to move ahead on homeschooling, after a long period of indifference.  He’s eager to learn to read, and is pretty much there, though he tires of it after a page or two.  On the math front, the boys have recently been kicking around the concept of “infinity,” and while Jason’s okay with the idea of a number that can’t be divided, multiplied or added, Scott’s still skeptical.  Yesterday he told Jason, “Yes, I can count to infinity.  But it would take a long time.”

One thought on “Scott: Swinging to Infinity”