Not sure I have much to add on the subject of William Shatner venturing into space for real, but I figured I couldn’t let it go entirely unmentioned.

I don’t know what’s odder; the bizarre juxtaposition of fiction and reality that is this story, or the fact that by now life in general is so weird and random that it’s somehow not all that mind-blowing, after all.  So many crazy, revolutionary, far-out concepts are introduced to us on such a regular basis that they hardly make us blink anymore.  Instant video meetings with friends and family around the world whenever we want them? Sure, why not? Phones we can take with us anywhere, and that also serve as high-resolution cameras, viewscreens for movies and TV shows and a computer link to all recorded knowledge?  Touchscreens, nanobots, personal drones, fridges that tell us when to buy more milk, apps that run our home thermostats from half a world away? Yeah, yeah, what else is new?  And now, space tourism, and actual Captain Kirk in actual freaking orbit.

If you’d told me as a kid that I’d see all of that in my lifetime…well, I probably would’ve believed you, and expected a jetpack and and flying car in the bargain. But somehow it’s still weird to (1) have it all be true and (2) realize a lot of it entered my life without so much as a “Gee Whiz.”  Sure, it’s impressive when I look back on the entirety of it, but at the time change arrives it’s more like, “Okay, that’s good, what else ya got?” And so it’s worth taking a breath to let it sink in: Captain Kirk actually. went. to. space.

Naturally, this has led to lots of lame jokes (“To oldly go…”) but also to a wonderful spoof-news article from NewsThump, reporting how the rest of Shatner’s team were concerned about unexpected changes to the Blue Origin uniform. 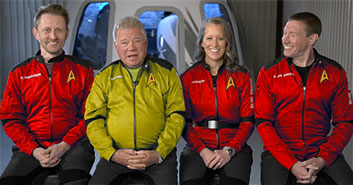 Partly, I just enjoyed that gag because Star Trek is by now so ingrained in the public conciousness that you can make a “red shirt” joke and expect everyone to get it.

Of course the rational part of my brain says this whole thing is just a publicity stunt by Amazon and a way for Jeff Bezos to generate positive buzz after his own less-than-well-received trip aboard Blue Origin. “Hey, they’ll have to love us if we get Captain Kirk into space, right?” Thank goodness they brought him back alive, or it would’ve been the worst PR disaster of all time.  Plus you’ve gotta feel for the other guys who shelled out millions to go to space thinking, “I’m gonna be famous!!” only to be told who else would be along for the ride, instantly relegating them to “…and the rest” status in every news story.  D’Oh!

Anyway, I’m happy that on top of an already full and eventful life, Shatner got to break a world record and experience four minutes in actual space at the grand old age of 90.  And cynicism be damned, yes it is inspiring.  Who better than Starfleet’s finest to deliver a badass, Kirk-Fu flying kick straight to the jaw of old age?  And hey, for once even George Takei can’t complain: today he got a whole four minutes of a Shatner-free Earth.