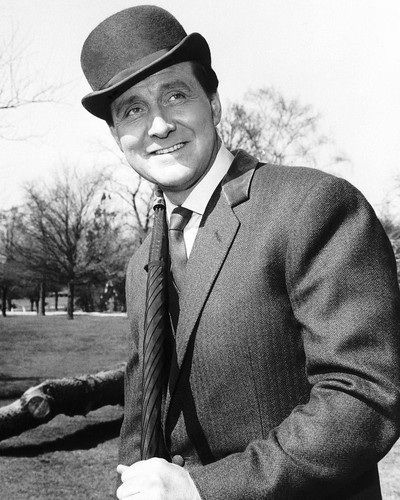 I couldn’t let the recent passing of actor Patrick Macnee go by without at least a tip of the bowler.

My memories of Macnee go way back.  It’s likely I heard him before I saw him, thanks to his ominous narration at the beginning of every episode of the original Battlestar Galactica. Later, he was the voice of the Cylon’s “Imperious Leader” in the same series, before finally showing up in (sort of) human form as the evil Count Iblis.  By then, I’d probably seen him as British agent John Steed on The New Avengers, running at 11:30 EST on the CBS Late Night Movie.

Naturally it was the Steed role that made the biggest impression, as James Bond had already predisposed me in favor of secret agents and all things British.  Though paired in The New Avengers with two more contemporary, youthful and “hip” agents, it was the comparatively anachronistic (if not fantasy-based) Steed who most interested me.  With his Edwardian outfits and ever-present umbrella, his impeccable manners and cultured ways, he was exaggeratedly “British,” which I suppose satisfied me in the same way that foreigners want all Americans to wear cowboy hats and talk with a twang.

Post-Avengers, Macnee went on to memorable roles in the horror film The Howling and the cult-favorite comedy, This is Spinal Tap, and practically innumerable guest appearances on TV shows.  He starred as Dr Watson opposite two Sherlock Holmeses, Roger Moore (!) in Sherlock Holmes in New York and his old school chum Christoper Lee in two other films.  Macneee also played Holmes himself in The Hound of London, making him one of very few actors to play both roles.  In the wake of his passing, I sought out the Magnum, PI episode titled “Holmes Is Where the Heart Is,” in which Macnee guest stars as a former British agent who thinks he’s Sherlock Holmes in a sort of “two for one” package of Macnee specialties.

Indeed, the Steed role was the gift that kept on giving for Macnee, keeping him steadily employed from 1961 to 1969 opposite various screen partners on the original series, then again in 1976 in the aforementioned New Avengers revival, plus in-character cameos on talk shows, variety shows, music videos and commercials.  Even when he was “done” with Steed, he pretty much turned “ex-British agent”  into a second career; you could just imagine producers saying, “We need a former spy in this episode.  Get me Macnee!”  In 1983, he replaced the late Leo G. Carroll as Napoleon Solo’s boss for the Return of the Man from UNCLE TV movie, and if his precise status was somewhat unclear in the 1985 Bond film, A View To A Kill, his casting opposite Roger Moore was obviously meant to capitalize on the nostalgia appeal of pairing two former icons of 60s British adventure TV.

In the 90s, I finally got to see the original Avengers series on AMC, and it became a bit of an obsession for me.  Almost every episode had at least one moment for Steed to shine, but near the top of the list, for me, was a scene in “A Touch of Brimstone.”  Chiefly famous for a skimpy and suggestive outfit Mrs Peel wears as “the Queen of Sin,” (contributing mightily to the decision by American networks not to air the episode at the time), the episode also features the immortal scene where Steed applies for membership in the mysterious Hellfire Club, and is put through a tension-filled initiation by the wonderfully evil Lord Cartney, as played by Peter Wyngarde. 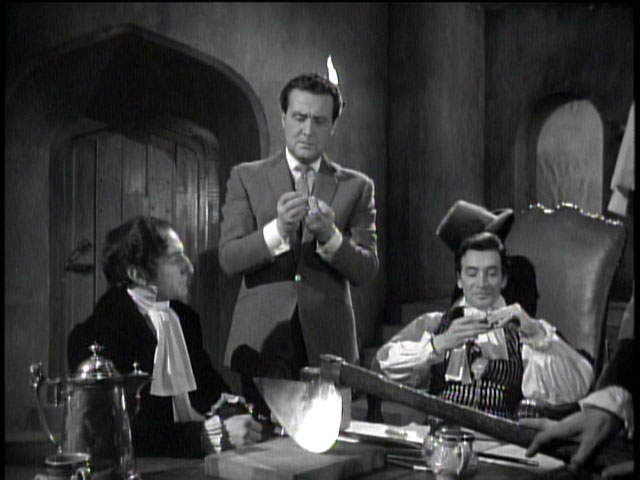 Steed is first challenged to drink a ridiculously huge mug full of some sort of alcoholic spirit, which he does with aplomb (asking for a bit more as “the drive down seems to have given me quite a thirst.”) Then, with his wits and reflexes thus (presumably) impaired, he’s challenged to remove a dried pea from a chopping block before a club member can cut it in two with an axe.  Another member, and a veteran of this particular test in the past, holds up his two prosthetic fingers as a warning of what could happen.  Steed agrees gamely, with the air of a fatuous aristocrat out of his depth and blind to his peril.  Lord Cartney looks on with a cruel leer, al but licking his lips at the prospect of witnessing a gruesome maiming.  The signal is given, the axe swings down and Steed — puff! — blows the pea off the chopping block, thus meeting the challenge of removing it, and without ever risking his digits. 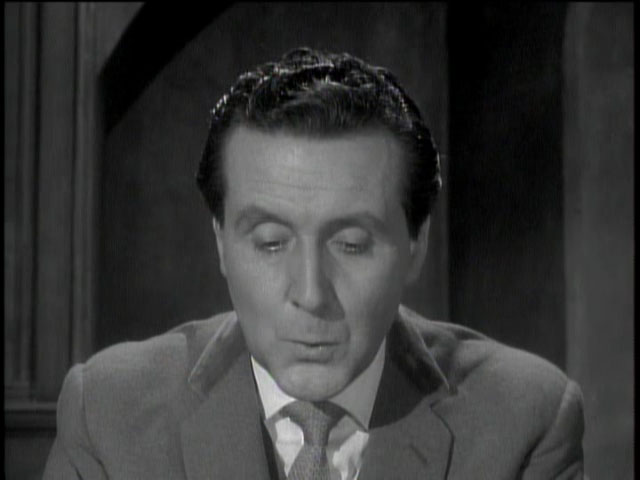 Wyngarde, still a couple of years away from iconic superspy status himself as Jason King in Department S, is perfect here, projecting first an oily sadism, then a fuming disappointment at Steed’s clever dodge.  Macnee handles the scene perfectly as well, playing up his “clueless fop” act while underneath he’s acutely aware of his danger, and Cartney’s treachery, and determined to outwit him.  By literally “blowing off” Cartney’s “ultimate test,” he makes a mockery of the whole exercise, and gives Cartney a figurative poke in the eye without ever dropping the pretense of fun and games.   Here we have Steed in a nutshell, the eccentric, flighty facade concealing a center of hard, English steel.  It’s no coincidence that the bowler secretly has a steel brim and the umbrella conceals a finely honed sword.

At the height of my infatuation with The Avengers, I bought a full-size umbrella to replace my collapsible version.  I wanted to practice all the “stage business” Macnee was so great at when he used his as a cane, a pointer or a hook (rarely did Steed’s brolly actually get opened).  In my defense, I never carried it unless their were rainclouds out, and ultimately I abandoned it as too hard to wrestle in and out of my car.  Plus I could never roll it even a fraction as tightly as Steed did.  Even at my most intense stage of fandom, I didn’t buy a bowler, but I definitely sympathized with Niles and Frasier Crane when they defended their love of Steed to their dad Martin in an episode of the sitcom, “Frasier:”

Martin: My point is, you guys could never resist putting on airs.  Even when you were in junior high, you used to love that TV program, “The Avengers.” You used to run all over the neighborhood pretending you were that guy with the umbrella…Steve.
Frasier: Steed!
Niles: (rolls his eyes) Dad!
Frasier: There were worse role models. Steed was dapper and witty.  When anyone tried to give him grief, he gave them a sound thrashing with the umbrella.
Martin: Well, that’s great, admire him if you want. But did you have to run through the neighborhood in bowler hats? I mean, you were just begging to get beat up.
Frasier: Come to think of it, it was rather a rough summer that year, wasn’t it?
Niles: I remember getting a chin strap so the bowler wouldn’t fall off when I ran.

It’s worth noting that much of what we associate with Steed are traits native to Macnee himself; the cheery good humor, the charm and pleasant manner and gentlemanly conduct.  In his book, “The Avengers And Me,” Macnee noted that it was largely up to him what form his character would take (not least because, at first anyway, it had been meant as just a supporting role):

“Nobody told me how I should play steed, or relate to other people.  I never, ever, got a brief. It was never written down.  The script for ‘Hot Snow,’ the first episode in December 1960 said; ‘Keel is about to push the bell button when the door is flung open.  Steed stands there.’  Just that, nothing else.  No description, nothing.  So I just made him up….[Steed] was never a character in literature, like Bulldog Drummond, Simon Templar or James Bond, or a persona somebody else had first created in another medium.  Steed was never written down — “Steed stands there.”– and I was the man.  I’m awfully proud of that.  As time went on, Steed and myself just grew together.”

Even in his heyday, Steed was an anachronism, and more’s the pity.  Macnee, likewise, seemed one of the last exemplars of a more civilized and decent era, a time either long past or maybe just imagined in the first place.  We’re a bit the poorer to have lost them both.