It took me a while to get into Andy Griffith.

By the time I was old enough to stay up for prime time viewing, The Andy Griffith Show had already morphed into the tepid Ken Berry spin-off, Mayberry RFD. I never quite warmed to the “Perry Mason by way of Cracker Barrel” routine of Matlock. Oddly, my introduction to Mr Griffith probably came with Salvage 1, a kooky show (but not a comedy!) about a salvage expert who builds a space ship out of junk parts and manages to get it to the moon and back.  And while I liked that show(!), he didn’t especially stand out for me.  Anyway, as a kid I was all about the futuristic adventure of Star Trek and glamorous globe-trotting with James Bond; down-home, “country” shows were all Hee-Haw junk in my book.

It wasn’t until high school and syndication that I was able to watch The Andy Griffith Show, but by then I’d changed enough to enjoy it, because by then I was old enough to understand the appeal of nostalgia.

Yes, I know you can’t feel nostalgia for a place you didn’t live and a time you were too young to remember (if you were alive at all), but the beauty of Mayberry was that it could have been any small town, and for millions of viewers it was theirs.  For me it was the small Virginia town where I spent my earliest years, and which — after a passage of years and miles — my hazy memories had rendered as idealized and near-mythical as the backlot sets of Mayberry. 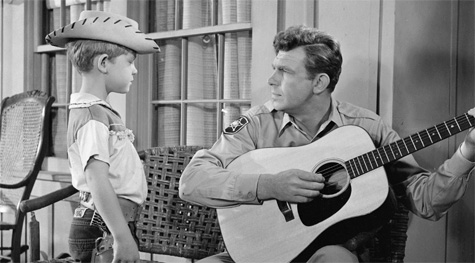 The real appeal of the show for me, though, was in the relationships between the characters, especially the father-son dynamic of Andy and Opie, which was touching and real without — at least for my money — tipping over to maudlin.

Andy Taylor was, for me, a lot like Ward Cleaver; a good dad who made his share of mistakes, and often ended up with egg on his face, but whose heart was in the right place.  By the 70s,  sit-coms woudl shift their focus away from the parents to the kids; the stars of the shows were precocious pre-teens, and the dads — to the extent they got any screen time at all — just showed up to play straight man and act hopelessly befuddled by pretty much everything.  This is a trend that continues to the present, with no end of cable shows on Disney and what-not starring nominal “kids” who live essentially as little grown-ups, with parents who are mainly absent and when they do show up, an annoyance.  (Delivering two lessons modern generations have embraced all too readily: One, Never involve your parents in your life because they just don’t get it, and Two, perpetuate childhood as long as you can, because “grown up” is worse than dead).  For me, those older shows proved there’s lots of comedy potential in parent-child relations without making the parents into cardboard caricatures, or kids into smart-mouthed trouble-makers (though they were around then, too. See “Dennis the Menace”).   Andy and Ward often wandered in over their heads when it came to being dads (who doesn’t?) but they were never played as buffoons.

Ironically, one of the scenes I remember best from the Andy Griffith Show was actually about the folly of excessive nostalgia.  Andy, Opie and Aunt Bea are sitting on the front porch one summer night and the exchange goes more or less like this:

ANDY: “Opie, when I was a boy on a hot day like this, the ice man would drive his wagon through town and we kids would all run along behind it, trying to snatch off a hunk of ice to chew on.  Of course we’d usually get a piece of straw in there with it, but it still tasted great.  You know, something’s gone out of life since then…”

The message — if any — being that it’s easy to overlook the down side of the “good old days,” and to forget that, after all, back then we were all working towards and dreaming about our future…which is now.  Better to enjoy the day at hand than pine for the one that’s gone.

Or something.  But it’s still hard not to yearn for a time when life was slower and simpler, when the “social network” centered on the annual town picnic and  “friending” someone involved actually meeting them, when all it took to keep the peace was a sherrif and a deputy with only one bullet between them (and that one kept in a shirt pocket), when the only resident of the jail was “the town drunk” and being drunk was pretty much harmless, when families talked to each other over dinner every night and then moved out onto the front porch to talk some more.

Yes, it’s hard not to pine for those things even if you never actually experienced them.  Maybe especially if you didn’t.  Even though we know Mayberry wasn’t real, we feel it should have been, so we massage our own memories until our home towns are Mayberry, when none of them really were.  As newsman Maxwell Scott says in The Man Who Shot Liberty Valance, “when the legend becomes fact, print the legend.”

And so as he embodied the protector of Mayberry and its values, we can mourn the loss of Andy Griffith, the actor.  But since he was only ever an idealized symbol in the first place, we needn’t say goodbye to Andy Taylor.  He’ll live on in reruns, as will Mayberry itself, not so much a real town, in Griffith’s words, as “a state of mind.” Meanwhile as a dad, I’ll keep trying to give my kids what I had; a great childhood that, looking back as adults, they’ll remember being even better than it was. 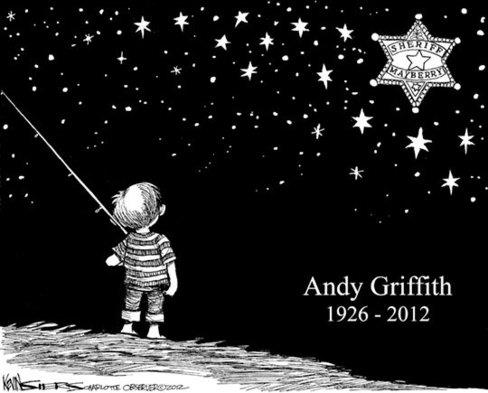