On Sept. 17, I lost a longtime co-worker,  mentor and friend to cancer.  His name was Richard Brumfield.

Richard was a complicated guy, and just to make it even more complicated, he was also a simple guy.  A Marine veteran who spent 23 years in the Corps’ COMCAM division, filming combat in Vietnam and later Beirut, Richard would nonetheless never have struck you as the “military type.”  He certainly wasn’t what you’d call spit-and-polish or gung-ho, though his training did tend to come out in the way he’d call our clients “sir” and “ma’am,” in that way military men and police officers tend to do, even in retirement. 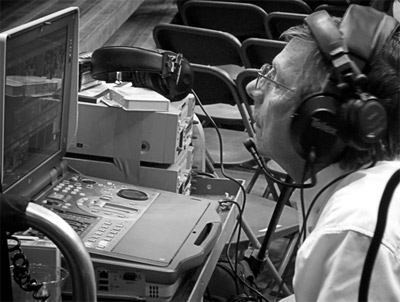 Pretty much from the day he joined our staff, we picked on Richard as the “old man” of the outfit, though he couldn’t have been much older when he started than I am today.  It probably had more to do with his demeanor; he could certainly come off as a “keep your frisbee off my lawn”-type crusty curmudgeon.  Anyone who spent any time around him, however, knew it was all bluster; he was a total marshmallow under that prickly exterior.  I never knew him to give less than 100% to any job, or to turn down a request for help from a co-worker no matter how much it might have inconvenienced him or how late it meant sticking around.  Every year he put together a special video for local high school graduates who were dealing with cancer and I’m positive he never wrote up a bill for any of his work.   And rumor has it, though I’m not supposed to know, that even as he was dealing with constant pain and the long ordeal of chemotherapy and radiation, he took time out to write a letter to the president of the university praising his coworkers here in the department.

Richard dropped out of high school before he joined the Marines, but you’d be hard pressed to find a guy better-informed on almost every subject.  Working at a university, we did video projects for doctors and professors from all disciplines, and as we interacted with them, he’d always ask insightful questions that got the experts talking and thinking, and put them totally at ease (since the one sure way to an academician’s heart is to express interest in his or her field).  Often his questions led to a more fully realized film, but more than that it relaxed the “talent” to the point where they turned in a better performance, because now it was no longer about “how do I look” and “that camera is scaring me”…now it was an opportunity to share their interest with a wider audience; they could concentrate on what they were saying and not how awkward it felt to be saying it to a cold, unblinking, mechanical eye.  It was a process I watched unfold a thousand times, and I never quite decided whether he was really that interested in so many things, or if it was just the shrewd strategy of a gifted director.  Either way, it was always impressive to witness.

Working with a guy for twelve years and spending time with him in the office, on the road or at conferences, you get a lot of opportunities to chat.  Once you’re done with the mad dash of setting up for a shoot, there’s often a lot of waiting around for things to happen, so you talk about whatever you can think of just to pass the time.  Consequently I know that Richard was a troublemaker as a kid, and once drove a motorcycle through the halls of his school (which may have contributed to that early departure).  I know he taught film at UCLA, despite — again — his own lack of a degree and a less-than-welcoming reception from the decidedly anti-war crowd enrolled there when he arrived in the late 60s, looking every inch the Marine.   I know he had a knowledge of and appreciation for vintage films and film stars, which made for many interesting conversations and — when I wasn’t careful — something of an education.   He had hilarious stories of working with Henry Winkler (a snob) Robin Williams (a druggie) and Geraldo Rivera (a narcissistic phoney…surprise!).  The star who most impressed him was Judy Garland, whom he once got to met, briefly, and of whom he was clearly in awe.  He had an encyclopedic knowledge of camera and editing techniques, and — again belying the “old fart” label — a keen interest in where video was headed in the digital age.  It never ceased to amaze me how he seemed to know about every new development in video before anyone else heard about it, especially given how much time he spent playing poker on the internet.  When did he find time to learn all that stuff?

I also know, of course, that he loved his family, and doted on his grandkids.  And that he was scared, in the last year or so, of what was ahead for him, and them.   He kept it together for their sake, but I knew he was freaking out underneath it all, as who wouldn’t?  In spite of ever-increasing pain levels and diminishing mobility, he kept dragging himself into work as long as humanly possible, and I think it broke his heart to finally give it up.

During Richard’s illness, I learned an interesting thing or two about the government’s official stance on Agent Orange, the Vietnam-era defoliant blamed for so many illnesses over the decades.  As a veteran, all Richard had to do to collect V.A. benefits (or to start the ball rolling, anyway) was to prove (1) that he served in Vietnam during the conflict and (2) that he had cancer.  With those two facts established, the government will rubber-stamp your request in the certainty it was Agent Orange that did you in.  Of course, if you happen to be a Vietnamese citizen with cancer, or with a child with birth defects, the official answer is, “There’s no proof Agent Orange causes any of that.”

There was another take-away from the whole sorry affair, and that is that everyone should be intimately involved with their own health care.  Don’t assume your doctor knows all; if you have a test, ask for the results, and if you’re not getting answers that make sense to you, get a second opinion.

It’s a very strange thing, working closely with someone for so long and then realizing one day they’re gone.  Every day I come across a file he crammed in some unlikely place, or a folder or label with his handwriting on it.  I’m torn between the desire to reorganize things the way I always wanted them to be anyway, and the reluctance to alter the few things left that reflect his influence.  At this point, his phone’s pretty much stopped ringing, and soon the day will come when people stop asking me about him, or sharing condolences.   And someday, if I’m here long enough, it’ll be hard to even remember what it was like when he was here.  It’s a natural process, but it’s still somehow offensive to imagine in the early stages.

Speaking of condolences, that was the one part of this whole thing that most caught me off-guard.  I was not prepared to have people seek me out to tell me how sorry they were; after all, I’m not family.  I found it very touching that people would think of how it was all affecting me, although ironically I think it didn’t really hit me that hard until they did so.

Richard’s funeral service was both low-key and impressive, featuring as it did a Marine Guard to act as pall-bearers, play Taps and present the colors.  Since he wasn’t really the religious type, it was held at the graveside, with what appeared to be a “rent-a-preacher” delivering a respectful if generic eulogy; I got the distinct impression the minister’s familiarity with Richard was fleeting at best.  Similarly, I was hoping for more from his obituary, and found the one or two mentions on the web (at USMC sites) even more cursory.  Surely a guy as storied and well-traveled as Richard deserved something more involved, or even profound?  Which I guess is what drove me to start this post, though it occurs to me I’ve achieved only the “wordy” part. 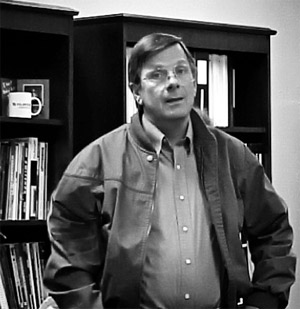 I guess the only thing to add is that Richard was a sort of father-figure to a lot of the student workers here, some of whom were separated from their families by whole continents.  They seemed drawn to him for some reason, and sought out his advice.  It occurs to me he played a “mentor” role to me, as well, having been the one to sweet-talk management into transferring me to the video department when I was disillusioned with my previous position.  This despite a lack of any real experience in videography on my part.  Thus he joins a line of teachers and mentors who’ve influenced my life and career, and for that alone deserves mention here.  Not that it was an entirely altruistic move on his part, mind you; before that, he was a one-man department, and he needed the help.

More than that, I’m pretty sure he was lonely in that office, physically separated from the rest of the staff by a long(ish) hallway.  Lately I can sympathize with that feeling, as it’s certainly been a lot quieter in the last few months.   In fact I’ve been struck by just how large a space it is, though of course the office is exactly the same size today as it ever was.  It’s just that a very large presence has left it.