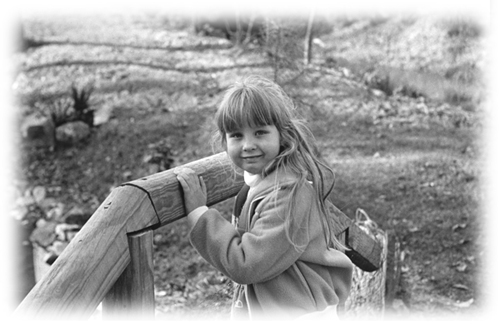 I must have looked for this photo of my cousin Heather a dozen times in the last two years. I finally stumbled across it by accident in June, just a few days before the anniversary of her death. Today she would have turned 29.

There’s something haunting about photographs just by nature. They capture a fleeting moment when light bounces off a subject, sending its image through a lens opened for a fraction of a second to be etched onto a frame of film forever.  It’s even more haunting, of course, when the subject is no longer with us.

I took this photo somewhere around 1985 or 86, most likely, when I was enrolled in a Photojournalism class. We were sent off to capture images of people doing things, shadows making patterns, details in architecture, studies in contrast and so on, all in black and white and all with fully manual 35mm SLRs. Back then Heather would have been 5 or 6 years old and constantly following me around, so she tends to show up in a lot of images. This one was taken in the back yard of her parents’ neighbors, on a footbridge over a stream. It’s hardly the best shot I ever composed, but I always liked it.

Naturally I lost the negative pretty much the day I made the print, so this one copy (now scanned for posterity) is the only record I have of time spent on a pleasant day over 20 years ago, in a backyard that looks a lot different now, with a little girl who still thought I was the coolest, smartest, most handsome and wonderful male in the world.

This time I’ll make sure I don’t misplace it.