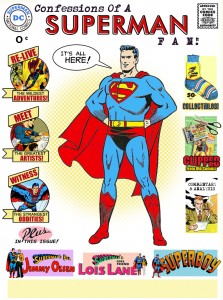 What seems like a gazillion years ago, I started a fan page dedicated to Superman.  Originally it was just a few static pages devoted to my favorite artists and stories, but when the blogging craze took hold, I transformed it into a blog and labored diligently to update it at least weekly and often two or three times a week.

The site lived, in those days, as a subdomain of a huge virtual entity known as “Superman Through The Ages,” on server space donated by the friend who ran it.  But like the hero it honored, STTA seemed cursed by fate, haunted by repeated disasters and plagued with villainous attempts on its virtual life.  It was repeatedly hacked and taken offline and at one point the site owner himself purposely knocked the whole thing offline for still-mysterious reasons.  By that time, a number of us super-fans had built up something of a community on the site’s message boards, so to give us a new place to gather, I built new boards around my site, which I had meticulously reconstructed from back-up files and moved to a new host.  Which in turn got bought out and shut down.  And so on.

Anyway ultimately I figured it wasn’t worth the headache, so I dropped the whole matter for the last few years.  But few days ago I figured, what the heck, I put a lot of time and effort into all that content, so it ought to live somewhere other than a CD-ROM at the back of a drawer.  And so, once again recklessly courting doom at the hands of the internet deities, I’ve set aside a branch of this site as a sort of “museum” to the old Superman Fan site and blog, with my old blog entries reformatted into static pages…at least those I could salvage from my last, incomplete backup of the database.

Wow, that’s probably a lot more than anyone really wanted to know, but if you have any interest in Superman at all, I hope you enjoy browsing these pages, outdated as they may be here and there.  They were fun for me to create, and as it turns out, kind of cathartic.  I tend to get obsessive about my hobbies and won’t shut up about them while the interest level is high (as my long-suffering wife will tell you).  In the case of Superman, having to turn out a weekly (or semi-weekly) blog on the Man of Steel for three years eventually burned me out entirely.  When I quit, I had literally said everything I ever wanted to say about the guy, and to this day I’m pretty much “over” him.  Interestingly (?) I had already gone through the same cycle with James Bond, who used to fascinate me endlessly but after eight or so years keeping alive the “Mr Kiss-Kiss Bang-Bang” site (also now-defunct) I’d pretty much lost interest in the mug.  (In fairness, four Pierce Brosnan films in a row helped cool me off considerably, as well)

So now I know that yes, I can get beyond an obsession, but honestly if it takes that much labor, it’s not a strategy I’m likely to try again.