I was 15 years old when John Lennon was killed.

At the time, I wasn’t at all into pop music; all the records in the house belonged to my parents, and they were all show tunes, folk or comedy albums, not that it mattered because they rarely played any of them.  I’d had a turntable when I was younger, but I only ever used it to play “book-and-record” adventures of superheroes, “Snoopy vs. the Red Baron” or similar novelty records.  My uncle tried to get my brother and me into contemporary music — I guess — by giving us a B.J. Thomas album that included “Raindrops Keep Falling On My Head” and “Suspicious Minds,” but it failed to convert us.  When we finally got a radio in our room, we used it mostly as an alarm clock and left the dial at the “easy listening” station.  I couldn’t have named a single “guitar god” of the 6-string, but I was well-versed in the “101 Strings.”

I’d heard of the Beatles, naturally.  I mean, I didn’t live on the Moon.  But as a lad, my exposure to them was limited to a network airing of the Yellow Submarine animated film (which I liked) and possibly a re-run or two of their 60s cartoon show, so I figured they were a kid-oriented group like The Monkees, only not as cool. 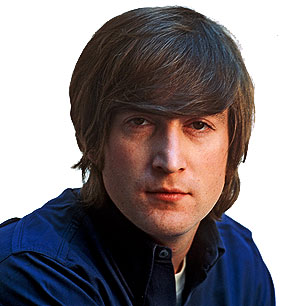 Ironically it would take the death of Lennon — and the resulting flood of Beatles tunes on every radio and TV station in America — to make me sit up and take notice of the Fab Four and through them, rock and pop music in general.   My uncle had an 8-track tape of the Beatles 1962-1966 compilation album (aka “The Red Album”) and we must have played it a thousand times that December, marveling at how good every single song was.  Seriously, even “best of” albums tend to have their weaker tracks, but this thing was all killer.

From there, the hunt was on to locate and collect all the Beatles’ albums.  With no concept of the band’s history, Tim and I acquired them completely out of order, based more on the appeal of the cover art than anything else, so the heavily produced and technically accomplished Abbey Road might be followed by the more rudimentary, almost live-sounding Please Please Me.  At first, the group was a four-headed beast; one voice the same as the others, but in time we learned to tell the difference: that’s Paul singing, now it’s John, that other voice must be George.  Ringo’s easy.

Still later we learned to hear their “voices” in the writing; “Norwegian Wood” had John’s fingerprints all over it; “Yesterday” was undoubtedly Paul’s.  Either member of the songwriting Dynamic Duo could paint vivid pictures in words, but with John there was that seemingly effortless mastery of language; the ability to coin a phrase that could mean two or even three things at once.  And of course there were the phrases that had no meaning at all, save those the listener assigned to them, but somehow they always came off sounding mysterious and important — possibly life-changing if we could only decipher them correctly — instead of just random and meaningless (which was closer to the truth).

Inevitably, and with no little disappointment, we reached the end of the 200+ catalog of Beatles songs, but not to worry, because then came the CDs, which featured the albums in their superior UK configurations and provided an excuse to start the process all over again.  And then there was the Anthology project, the re-masters, the Love album, the #1 album, the various solo albums and so on.

Meanwhile, all those trips to the record store (which I’d always just walked by without a glance pre-Beatles) led to interest in Pink Floyd, the Stones, the Kinks, the Everly Brothers, Buddy Holly and later the Talking Heads, David Bowie, the Police, etc.

Most likely if Lennon hadn’t been killed that December, something else would have eventually gotten me into pop music, but as it stands that was the catalyst.  I’ve always harbored a bit of guilt at remembering that 8-track so fondly, given the reason it got popped in in the first place, but maybe a better way to look at it is that it was a case of something good coming out of an event that was otherwise so tragically rotten. 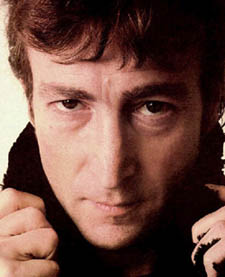 I won’t pretend to buy into the blinkered hagiography that’s evolved around Lennon — who wasn’t a saint by any stretch — and I was never impressed with the daft publicity stunts presented as “peace demonstrations” that really amounted to advertisements for his wife’s “art” shows.  I find a lot of his solo work littered with ham-fisted “message” songs, the witty wordplay of the old days replaced by blunt, unsubtle sermonizing,  repetitive protest chants or glorified therapy sessions venting insecurities, hang-ups or personal grudges I’d just as soon not hear about.  (And yes, I know that was the point of them, and I was supposed to feel uncomfortable hearing them.  But that doesn’t make for songs I like to hear over and over.  It’s like Schindler’s List: I’m glad I saw it, but I’d just as soon not see it again).  However, on the flip side are the strong melodies, the occasional great lyric, the beautiful, dreamlike quality of songs like “#9 Dream” or “Oh My Love,”  the promising return to form with Double Fantasy and that phenomenal, versatile voice, so perfect for rock-and-roll.  With John, it was always a mixed bag, but that’s what kept him interesting.  He seemed to write songs to please himself, not the masses, so when a song did work it was because he’d tapped into something universal, not because he’d assembled it by the numbers.  Like any fan I’ll always be left to wonder what aural wonders might have come to us if he’d stuck around, and what if any role  he’d have played in shaping popular music in the decade or two that followed.

Of course that’s assuming he’d have stuck with it.  I often think even a guy as egocentric as Lennon would be amused to see himself made into a secular Messiah, and likewise I think he’d have scoffed at the notion of a septuagenarian performing “rock and roll.”  But Mick and Keith and his old mates Paul and Ringo are still at it, so you never know.  One day you wake up and 70 years have gone by, but the songs are still coming and the voice is still there, so what are you gonna do? Maybe he’d be on the road even now, playing “Nowhere Man” and “Twist and Shout” to packed stadiums and selling truckloads of t-shirts and souvenir mugs.  Maybe he’d be schmoozing with the president as he’s handed Gershwin Awards and Kennedy Center Honors.  Now there’s a radical concept; John Lennon, darling of the Establishment.

As it is, he’ll always be frozen in time at age 40; the outspoken activist, the too-hip-to-be-commercial artiste, the martyr for peace, still possessing a full head of hair in its original color, sporting  just a few wrinkles and a respectable waistline.  Unlike his contemporaries in The Who, he really did die before he got old.  Like James Dean, Marilyn Monroe and JFK, he got to go out on top and looking good, remembered as much or more for what people projected onto him as for what he really was.  As pop icons go, it’s not a bad deal but as a husband and father, and a guy who loved life as much as any of us, I have to think he’d have been willing to trade all that for a few more decades on Earth, even if it did mean being gradually marginalized by a succession of “next big things”, eventually showing some neck wattle and maybe even creaking onto the stage for the occasional labored reunion tour with the other aging Beatles.

In the end, though, we all play the cards we’re dealt.  For all his songs and demonstrations telling us how we ought to do this or that, Lennon understood — had to understand given his troubled childhood and the whirlwind of Beatlemania — that much of life is simply beyond our control.  Or as he once sang, “Life is what happens to you while you’re busy making other plans.”

Happy 70th, John, wherever you are, and thanks for the music.