Well, this blog thing is working out great, huh?  No updates from April to September.  Anyhoo…

We had a lot of excitement over the Labor Day weekend as Jason finished the 78th annual Virginia Closed chess tournament with 5 wins and 1 draw, making him the 2014 VA State Amateur Champion.  At age 11, he is officially the youngest winner in tournament history.

A year ago, the Virginia Closed was Jason’s first adult tournament and even then he went in with dreams of taking top prize.  Alas it was not to be, but he stuck with it over the past year, boosting his rating by around 500 points (and more, after yesterday) and devouring every chess book he could get his hands on.  One of his adult admirers noted that Jason’s a great example of a “self-made” champion as he has no coach, no school club to back him up and no prodding from his parents.  Everything he’s achieved has come down to his own personal initiative and dedication.  Obviously we’re hugely proud of him for setting a lofty goal and making it a reality.

There was a cash prize involved, but Jason’s more excited about having his picture featured on the Virginia Chess Federation website for the next year, and probably in the next issue of the newsletter.  As someone who admires and respects great players, it means a lot to him to be recognized by his peers.

While all this was going on and Laura was relegated to “bide time and wait for results” duty at the tournament hotel, Scott, Grace and I checked out a classic car show at a nearby strip mall.  Scott’s the car fan in the family and he was excited when a 1955 Dodge Lancer pulled up behind us on the way in, with its fins and chrome and two-toned paint job.  His eyes really bugged out when we parked near a 1910 Ford Model T, so I was sure to get a picture of him and little sister next to it. 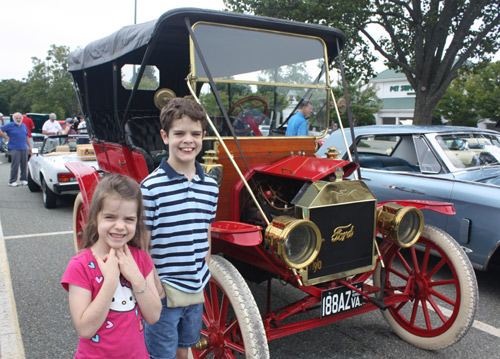 Then it was off to Build-A-Bear, where Granny and Grandaddy oversaw the adoption of My Little Pony #2 in Grace’s collection, Twilight Sparkle.  Grace’s plan was to get Twilight, then have her live with Granny for a week before coming home to “mommy” Grace (and sister Pinkie Pie) on her birthday Sept. 9.  Hard to believe Grace will turn 6 that day.

In the interim, we’ll be enjoying another visit from Grandma Patricia and — considerably less fun, I’m betting — holding a massive yard sale over the coming weekend.  I expect there may be some stories to share here from that experience, hopefully not of the “horror” variety.