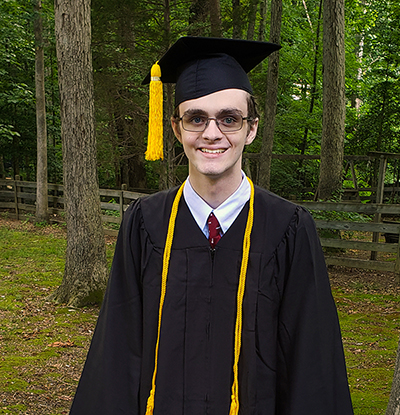 This is the part where as Dad I say, “where did the time go?” but I know for him it probably feels overdue.  I still remember spending my own HS graduation barely believing that my 12 year slog through public school could be finally over, even though looking back now, 12 years seems like nothing.  I’ve got socks that old.

It seems not so long ago we were bundling Jason off for the first day of preschool, so it’s a bit surreal to compare a photo from that day to the one above, featuring a 6’4″ (and counting) young man in cap and gown.

Except for those preschool years, Jason was homeschooled, sometimes in co-ops or group settings, sometimes as the sole member of his “class.”  I was always impressed by his self-discipline and focus as a learner, by his intellectual curiosity and his determination to master subjects.  There was never a lot of “whip-cracking” or micromanaging necessary with him; he was always diligent about following through on assignments and eager to challenge himself.

Lest I give the impression I was deeply involved in the day to day business of Jason’s education, let the record show that was almost entirely Laura’s doing.  Once we settled on the homeschool approach, she was the one who devoted countless hours to researching curricula, buying textbooks, lab kits and supplies, taking the kids on field trips and participating in co-ops.  For the last few years, she’s taught multiple subjects to classes made up of Jason and his peers, as well as ones for Scott and his peers and Grace and hers, first out of the house and more recently thanks to the pandemic, online.  “Homeschooling” means different things to different people, from “bringing God into every subject” to “keeping the government’s paws off our children” to “sparing the little darlings from all that burdensome work,” but Laura was determined to give the kids an education as good as or better than what they could get in public school, and it’s thanks to her labors as much as Jason’s that he was able to ace multiple achievement tests and be accepted at a number of fine colleges, finally settling on the University of Virginia.

Tomorrow we head to UVa to set up Jason in his dorm room for a 6-week summer session as part of the Clark Scholars program.  It’s going to be weird driving back home with his seat empty, but I know he’s ready to move on to the next chapter of his life, and he’s certainly eager.  At the end of the day, all you can hope for as a parent is that when the day comes to set your kids loose on the world, you feel good about their ability to stand on their own and make good decisions.  I’m grateful to have full confidence in his character and instincts, so on that front, we’re in good shape.

But as his Dad, I’ll worry about him, anyway.