Well another year’s gone by and as usual this site’s been largely neglected.  I always start out with every intention of posting regularly, then the next thing I know it’s New Year’s Eve again.

It was supposed to be easy; I downloaded an app that lets me post from my phone, from anywhere, on a whim.  I think I’ve used it once.  I bailed out of Facebook (having had enough of cut-and-paste “words to live by,” political screeds, believer vs. atheist brouhahas, cute cat pictures and friend requests from strangers…let alone the not-so-slow erosion of privacy rights) so I figured, “hey, now I don’t have to save the blog for lengthy articles: I can use it for the kind of brief blurbs I would’ve posted to Facebook.”  But I never got around to those, either.

Then towards the end of last year I got big fat bill from my host (FatCow) because, as they no doubt planned and I cluelessly obliged, I crossed over quietly from the “cheap introductory hosting rates” and into the “billed at regular rates” phase of our relationship.  So now I have even more incentive to actually DO something with this site I’m paying good money to hold onto.

So, we’ll start with a post to catch us up on life in the Morefield house.  Jason continued his chess career, competing in the Eastern Open in Bethesda Maryland over the Christmas break and ending in the #4 spot in the under 1900 group; not bad as he doesn’t get nearly as many shots at tournament competition as most of the players he was up against.  Also, he still doesn’t have a coach.  In fact, he’s been employed as a coach himself, teaching a class on Thursdays at a local private academy and on Thursdays at various Richmond middle schools as an employee of the Richmond Chess Initiative.

Meanwhile, Scott continues his love affair with the piano, and regaled us with many Christmas songs over the holidays (his “O Christmas Tree” is amazing).  While we’re lucky to get Jason and Grace to practice the pieces their teacher assigns each week, Scott eagerly takes on his assignments and, when he bores of them, downloads sheet music from the internet to practice whatever other songs catch his fancy.  Knowing I’m a bit protective of my guitar, he was excited to find we had another one crammed into a corner, a little folk guitar that has since become his.  So now he’s teaching himself chords and translating his piano sheet music for guitar.  Santa obligingly brought him a strap so now he can do the wandering troubadour routine.

Grace is enjoying her dance lessons and can be heard practicing tap routines in her sock feet just about any time.  Her teacher is always pleasantly surprised to see she’s actually spent time between lessons learning the steps.  Grace can also often be heard singing in her room, about anything and everything she’s doing or will be doing, or can imagine.  It’s hard to recall what the house was like before all these sounds — piano, tap steps, singing…and the occasional shouting match — but it must have been creepy quiet.

While Jason competed in his Maryland tournament, the rest of us had some time to kill, so I took Scott and Grace to DC to visit the Air and Space Museum, where Scott impressed me with his knowledge of aviation history.  He was particularly excited to be in the same room with the Spirit of St Louis and later the Wright Flyer.  I have no idea how he knows so much about either of them. Laura says the secret with homseschooling Scott is to leave interesting books lying around the house; sooner or later he’ll find and read them and file away facts and figures for retrieval when you least expect it. 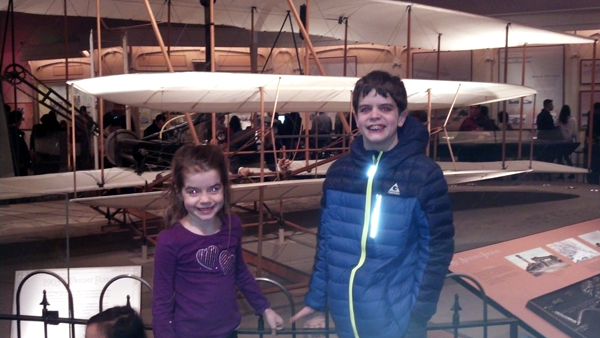 The other big news, I guess, is that Scott’s got his braces now, and Jason’s are on the way.  So there will be a steady flow of Morefield money into the field of orthodontia this year.

Also ahead for us: more tournaments, more scout camping trips and family travels.  We’re trying to build a master calendar to keep track of it all, and make some decisions about which events take precedence, or else this year is going to beat us up for sure.  But whichever way it goes, I’ve resolved once again, and hopefully to greater effect this time, to chronicle it all here on this blog.  If the next entry is titled, “Happy 2016,” you’ll know I blew it.