At some point in the last few months, I noticed everything happened in 1974.

Well, okay so maybe not everything, and certainly not everything good.  In the headlines that year, Richard Nixon resigned in disgrace to avoid impeachment in the wake of the Watergate scandal, celebrity hostage Patty Hearst held up a bank with her captors in the Symbionese Liberation Army, Ethopia suffered a civil war and Jack Benny, Duke Ellington, Bud Abbot, Ed Sullivan and Charles Lindbergh all dropped dead. 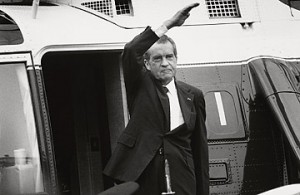 Not that any of that mattered to me, mind you, as I turned nine that year and didn’t really read the papers.

In celebrity news, devoted husband, father and spokesman for peace John Lennon ditched his wife and kid to indulge in an extended drunken “hiatus” with his mistress and punch out random bar patrons in California,  Paul McCartney hit a post-Beatles career high with his “Band on the Run” album and George Harrison went on tour for the first time since 1966.   Not that I’d have noticed that, either, as I hadn’t quite discovered the Beatles yet and all the records in the house were show tunes, comedy albums or Christmas music.  I did probably care that Sonny and Cher were getting a divorce, but only because my family enjoyed their variety show and now my folks would have to explain to us kids about divorce.  Worse yet, with Cher gone  we’d soon be subjected to the “Sonny Comedy Revue.”

The big movies of the year included The Godfather: Part II, Young Frankenstein, Death Wish and Chinatown, not one of which I’d have been allowed to see (though I did get to see Herbie Rides Again.  Whoopee)

Like most kids (I guess) my focus was on things closer to home: playing astronaut or “Army” in the back yard, bike rides to my friends’ houses, adding to my Matchbox cars collection and mooning over whatever cute girl I’d fallen in love with at church or school that week.

For a while now, I’ve noticed that  the things I was interested in when I was nine years old are often the same things I’m interested in, now. Which just to clarify is not so much comics and TV per se, but comics and TV from 1974.  Not that I haven’t picked up a lot of new interests over the years (some of them not even related to comics and TV), but the ones that have stuck with me the longest, and made the biggest impression, all seem to have originated in my childhood and in more cases than not, they all go back to that one year.

I’m not really sure why that would be, honestly.  I don’t know that the stuff from 1974 was any better than the stuff from say 1973 or 1975, but it seems like whenever I check out the copyright on some vintage book or movie or show I like, I keep coming up with 1974 over and over.  My current theory is that it’s because 1974 was also a year of upheaval for me, personally.  It’s the year I moved from Saluda, VA, a place I still think of as an idyllic, “Mayberry”-like small town where everyone knew (and seemingly liked) me to Cobbs Creek, a “blink-and-you’ll-miss-it” whistle stop with a tiny school, a tinier post-office and basically one little cul-de-sac of houses in the middle of freaking nowhere, and where nobody knew or cared who I was.  Fittingly, my house was right at the terminus of that dead-end street.

As the son of a Methodist minister, I got used to moving around (sort of), but that was easily the hardest of all the moves.  And so it occurs to me that maybe the diversions and silly entertainments in my life took on a greater significance that year, as the real world kept letting me down. I’m reminded of a “Funky Winkerbeam” comic strip from the early 80s (back when it was still funny).  The character known as “Crazy” is reading an X-Men comic (okay, it was #136, prequel to the death of Phoenix issue.  Yes, I know I have a problem) and his (maybe?) guidance counselor, suspecting Crazy’s feeling kind of down, is trying to bond with some small talk.

COUNSELOR: “Comic books, eh?  You know, I used to collect those, too.  I remember when I went away to college, I was feeling really lonely and miserable in this new town full of strange faces.  But then one day I was in a drug store and I came across a spindle rack full of comics, and seeing those characters was like catching up with old friends again, and I didn’t feel so lonely any more.  You ever feel like that?”

CRAZY: “Nah, I just read ’em for the ads.  Did you know you can buy x-ray glasses that see right through people’s clothes!?”

In retrospect, I wonder if I didn’t form such powerful attachments to escapist fare in 1974 because those fictional characters and adventures took the place of real friends and good times.  Certainly I can remember taking some comfort in finding that Batman and Superman were still on the stands, even if the pharmacies and grocery stores I found them in were new to me.  And when the new season of the Six Million Dollar Man kicked off in the fall, I must have felt a little more confident I could tough it out with my old pal Steve Austin along for the ride.

Anyway I figured I’d devote a few blog posts to 1974 since I imagine I’ll have it on my mind from time to time this year, what with hitting the 40th anniversary and all.  Plus as my age inches ever closer to the number-that-must-not-be-named, I’ll doubtless be going through a second childhood soon, anyway.

I was going to end this with some kind of amazing clip from 1974, but the best I could turn up was this Burger King ad.  What the heck, though; it qualifies since anyone who heard the jingle still remembers it 40 years on.  And for all you kids who complain about how tough it is working in fast food, be grateful at least they don’t force you to wear these outfits any more.