The show itself was fascinating as always, showcasing all the latest gee-gaws in production, presentation and display technology for live events, schools, churches and so on.  In particular, video displays seem to have no limits to how big, how thin and how sharp they can get.  In that respect, Vegas is a logical host city for the event, with all the gigantic video billboards dotting the Strip.  Just outside my hotel window I had a never-ending cycle of ads for Jennifer Lopez’ live act, a nightclub called “Jewel” and the bizarre, cycling animation that served as a “masthead” atop the Cosmopolitan hotel.

The trip out took about 8 hours all told, followed by a shuttle ride from the airport that ended in a fender-bender and a walk the rest of the way to my hotel (Bally’s).  I was ready to take the accident as an ill omen, but then who should come puttering past but Elvis himself, all 300 pounds of him in a white, sequined jumpsuit with high color and cape, and riding on a “Rascal” scooter.  That’s when I knew everything was going to be alright.

I’d forgotten a lot about the town in the 16 years since my last visit.  For one, the smoke in the casinos.  Cigarette smoking is so out-of-favor now in the US that it’s hard to believe I  used to work in an office where folks would light up right at their desk, and eat at restaurants that didn’t even bother with smoking and non-smoking sections.  Vegas is still firmly stuck in that Yesteryear, with folks puffing away at the slot machines day and night.  I noticed a “Smoker’s” area in the airport that came complete with slot machines and figured it was a brilliant move, since a Venn diagram showing “smokers” and “gamblers” would probably have about a 90% overlap.

The other thing I was reminded of was the “showgirl waitress” uniform.  Whether it was cocktail waitresses in the casinos or waitresses in burger joints or sports bars made no difference; if they were on hotel property, they had to prance around in a teddy, period.  This rule seems iron-clad, irrespective of whether you’re 20 or 50, heavy or thin, college co-ed or mother of eight.  Because, hey, hiring someone based on their physical appearance would be sexist, right?  But now that you’re on the payroll, get into that teddy.  Frankly, I felt pretty bad for these gals, given that the male staff wasn’t asked to wear leather briefs and fishnet t-shirts.  But who knows, maybe they’re cool with it.  The Paris hotel even had a girl dancing on the bar.  I’m pretty sure I’ve only seen that in movies before.  From the 60s.

I guess I lucked out with the hotel room; Bally’s ran out of single rooms with King-size beds so I got a double with two Queens for the same price.  Just outside my window was the “Eiffel Tower” with a clear view of the Bellagio’s twice-hourly fountain show, which seemed like a good thing until I tried to go to sleep, and had to listen to those jets of water shooting off to the tune of Celine Dion belting out the “Titanic” theme at about a thousand decibels.

I opted to take the Monorail to the Convention Center, which was pretty cool.  Lots of interesting sights out the window, like a golf course that I understand has actually been closed for 6 months but is still watered and maintained so as not to scare off hotel guests with a view of it.  The plan is to tear it up and put in a man-made lake for visitors into boating and skiing.  Take that, Lake Mead.  Way off by itself (it seemed) was the Drumpf Hotel, trying desperately to look more impressive and important than everything else with giant gold lettering, which seemed apropos.

The heat hovered between 100 and 107 but the old saw is true; it’s not the heat but the humidity.  I found it pretty tolerable.  Along the sidewalks every now and then were these misting “showerheads” to keep you cool; I avoided them at first because I didn’t want to get wet, but eventually realized I wouldn’t, anyway.  The water they shot out evaporated immediately, creating a sort of cool fog.  If they did the same thing in Richmond, I’d come out sopping wet.

While I was in town, the Golden State Warriors finished off the Cleveland Cavaliers in the NBA finals and the Capitals beat the Golden Knights for the Stanley Cup, so there was plenty of betting going on, I’m sure.  Certainly there was a lot of yelling at TVs in the restaurants, especially with the hometown team in the mix and playing in an arena just down the street.  I’ve never been that into sports, but it was easier to feel the excitement in a place where everyone in the room is a potential winner or loser.  On the other hand, it was vaguely depressing to realize no one in Vegas probably ever enjoys sport for it’s own sake, since it all comes down to wagers.  Anyway, it was cool to see lot of Caps fans walking around and feel a bit closer to home.

On the walk to the monorail, I saw a poster for Wayne Newton’s “comeback show.”  I’m not sure how old he is at this point, but by now he’s had so much surgery he looks like Jack Nicholson as the Joker, with his mouth in a permanent smile and one eye apparently unable to open.  Barry Manilow did a little better job of finding a promo picture that made it look like his age is still in the double digits.  I also saw ads for shows starring Donny and Marie, Rich Little and something called the “Australian Bee-Gees,” so basically if you were a big deal forty years ago or can do a reasonable impersonation of someone who was, you’re a potential Vegas headliner. 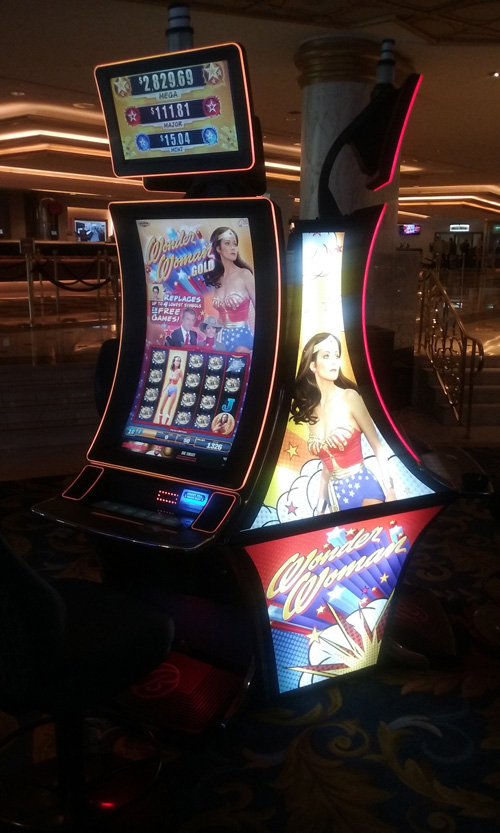 I didn’t spend much time on the slots, but I did spot a fun machine with graphics of Lynda Carter as Wonder Woman, and that claimed a couple of bucks.  Mostly I spent time at a virtual Blackjack table.  “Virtual” because the dealer was a lady who exists only as a video recording, but the money involved was all-too real.  After doubling my stakes the first night, I was hooked, then of course it was all downhill from there.

Much ado was made about a party hosted by an AV vendor, but once I got there it was too crowded and noisy for me, so I lasted all of ten minutes.  Just in general I think I’m not the Vegas type.

All things considered it was one of those trips where you’re glad you went but the best part is getting home.  I tend to most cherish time spent at home.  So naturally it’s off to Summer Camp in a week.