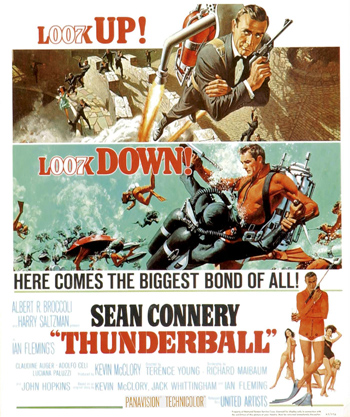 With the latest Bond film, Spectre, in theaters, and considering I’ve been writing about 50-year-old things this year, it’s a good time to take a look at 007’s battles with SPECTRE a half-century ago in a film billed as “The Biggest Bond of All.”

Hitting US theater screens in December, 1965, Thunderball certainly would go on to be the biggest money-maker in the franchise’s history up to that point, and held that distinction for more than a decade, vindicating Eon Productions’ strategy of making each new entry bigger, flashier, louder and more expensive than the last. To paraphrase the old saying, “Nothing succeeds like excess.”

On the other hand, Thunderball was also where we first started seeing the negative effects of the “bigger is better” approach, as the film is bogged down by long, lingering shots of its opulent Bahamian locations and protracted underwater sequences, as well as a piled-on plethora of gadgets both big and small.  There’s an epic scale to the film that wasn’t found in its three predecessors, but on the human level, there’s not much to sink your teeth into; human beings — including Bond himself — tend to get dwarfed by the spectacle.

The pre-credits sequence sets the mood, as Bond assassinates an enemy agent (who’s in drag, because why not) and escapes from the upper floor of a sprawling mansion via jetpack (the Bell Rocket Belt in its most famous screen appearance).  The real-life jetpack pilot who performed the stunt insisted on the un-Bondian precaution of a safety helmet, so Connery has to don one as well for the sake of continuity, but at least Q-branch has gone the extra mile and painted it to complement Bond’s bespoke suit.

Here we have in microcosm the whole spirit of “Classic Bond,” which is both ridiculous and awesome at the same time.  In the moment, the scene works, and in 1965 it was probably fairly astounding.  In terms of logic, however, it doesn’t really hold up: How did Bond get the jetpack up to the top floor?  If he’d flown in on it, someone would’ve heard it (it’s VERY loud).  If he’d carried it in the front (or rear) door and lugged it upstairs, one imagines that would’ve attracted some attention, as well.  Here’s where we’re really getting into the “Don’t think, just have fun” approach that will characterize the series for years to come.

Anyway, cue Tom Jones and his over-the-top rendition of the theme song (legend has it he fainted after hitting the last, extended note) and then it’s off to a secret meeting of that organization of global evil, SPECTRE.  In Dr No, it only got a name check. In From Russia With Love, we just saw a small office and a mysterious guy with a white cat with a handful of flunkies.  This time SPECTRE gets a massive Ken Adam set in all its stainless steel glory, with a large assemblage of no-goodniks plotting deviltry across the globe.  As in FRWL, bossman Ernst Stavro Blofeld browbeats a subordinate with threats of punishment before — surprise! — killing the co-worker next to him, instead.  But where in the earlier film death is dealt by a kick from a poison-toed shoe, this time the victim is rather more spectacularly electrocuted, his chair then lowered into the floor to return scorched and smoking.  And the meeting moves on to the next order of business…

The Plot Du Jour involves the theft of atomic bombs, which SPECTRE manages by hi-jacking a British bomber and crashing it in the ocean, then removing the bombs via submersibles and a force of frog men.  The easily spotted wires holding up the model bomber don’t detract (much) from the wonderful audacity of the sequence, both on the part of SPECTRE and the movie-makers.  The various underwater sleds invented just for the film are impressive, though soon enough we’ll tire of aquatic sequences.

Moving to London, the spirit of visual one-upmanship continues as, instead of the customary one-on-one briefing in M’s office, Bond attends a much larger meeting in a massive mansion with giant paintings concealing equally huge maps and diagrams.  Here we get a rare (indeed to date, unique) glimpse of the entire Double-0 section.  Late as always, Bond takes the seventh seat from our left, suggesting we’re looking at agents 001 through 009, in order.  Interestingly for 1965 and the frankly chauvanistic Bond series, one of the Double-O’s is a woman.

Soon enough Bond is off to the Bahamas to meet the Bond Girl and Bond Villain.  This is one area where it’s already become difficult to out-do what’s come before, but Thunderball takes a stab by giving one of them an eye patch.  In retrospect, it might’ve been more memorable if it had been the girl.

Claudine Auger as “good girl” Domino Derval is a looker (rumor has it she and Connery had an affair during filming), but for my money the standout is Luciana Paluzzi as the evil Fiona Volpe, Bond’s equal when it comes to separating sex from sentiment.  In a nod to Pussy Galore’s “conversion” from bad girl to good girl in Goldfinger, Fiona delivers a fun speech on how a mere roll in the hay with Bond isn’t enough to change her stripes.  Fair enough.  It just means she ends up dead in the next scene.

So then lots of other stuff happens, way too much of it underwater.  In fairness, though, the final battle between two armies of frogmen is pretty impressive, despite playing out in something close to slow motion thanks to the pesky laws of physics.

As if to compensate, the showdown between Bond and Largo unreels in near-superspeed, with portions shot “undercranked” like a Keystone Kops comedy short.  I have no idea what they were going for here, but it always feels like the producers said, “Yikes, all those underwater scenes put us 20 minutes over our time!  You’ve got 30 seconds to wrap this thing up!”

Anyway, virtue triumphs and, with the bombs retrieved and the world once more safe for democracy, Bond is allowed some relaxing downtime with the lovely Domino as they float in a raft, waiting to eventually be picked up by boat.  Just kidding; a big plane zooms overhead and jerks them into the clouds via “skyhook” extraction.  Bigger and better, remember? Subtlety is for suckers.

And so we reach the end of Thunderball, great big gaudy Christmas present plopped down in US movie theaters on December 22, 1965 amid a marketing frenzy that would serve as a blueprint for blockbuster franchises to this day.

Yes, the end, but James Bond will return. And if you think this one was over the top, you ain’t seen nothin’ yet.