Hitting 50: The Super-Moby Dick of Space 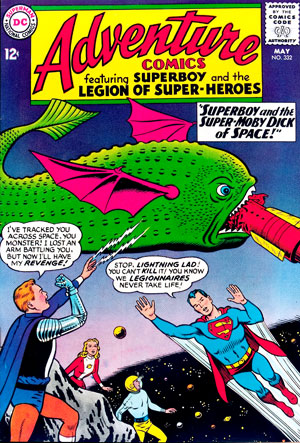 Even though I wouldn’t lay eyes on it until it was reprinted in the early 70s, the bizarre tale of the Super-Moby Dick of Space fist hit newsstands in March of 1965.  When I finally did get around to reading it, it left a whale of an impression.  Ahem.

This tale was probably my introduction to the Legion of Super-Heroes, the 30th Century club of super-powered, teen-aged champions of justice.  As one might expect when dealing with a team of teens, the strip was full of emotional drama drawing on themes of alienation, romantic longing, betrayal, rejection and hurt feelings.  But there were also surprisingly darker forays into profound loss and death.  For instance, Triplicate Girl could split into three copies of herself until the story where one of her selves was killed, necessitating a name change to “Duo Damsel.”  On another mission, founding member Lightning Lad was struck dead and stayed that way for several months, before being resurrected in a cycle that would come to define comics in the 70s and beyond, but was still fairly novel (if not pioneering) at this early stage.  As the years went on, other Legionnaires would die and stay dead, enough of them that their memorial statues would eventually fill a somber wing of the Legion clubhouse.  Compared to serving in, say, the Justice League, being in the Legion was a very dangerous proposition.

Here in Adventure Comics #332, poor old Lightning Lad gets the short of the stick again, losing an arm in a nod to “Captain Ahab’s” lost leg.  But I’m getting ahead of myself.  The story opens with a space-going ore ship attacked by an enormous creature.  In a typical example of Silver Age DC dialog that turns even the most casual utterance into ponderous exposition, one of the crew says, “That colossal space-beast! No one has ever seen anything like it before!”

While tooling around in his Legion cruiser, Lightning Lad intercepts a distress call from the survivors of the attack and races to the scene.  Zapping the creature with his lightning powers, he finds his own bolts reflected right back at him, only with an added tinge of poison.  His right arm takes the bolts full on, then grows painful and turns green (never a good sign).  The surgeon/scientist called in to help him is forced to amputate Lightning Lad’s arm to save his life. 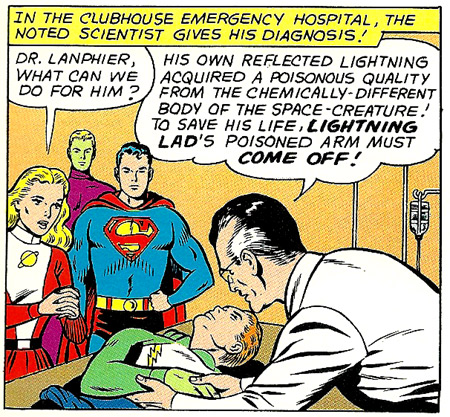 Waking to find his arm replaced by a metallic prosthesis (apparently 30th-century medicine has regressed somewhat since Steve Austin’s bionic heyday), Lightning Lad vows to find the Super-Moby Dick and kill it.  As this would constitute a violation of the Legion’s code against killing, his fellow heroes race to find the beast first and neutralize its threat in a non-lethal fashion.  Superboy goes first, but has to retreat when he finds the creature is exuding Kryptonite radiation (naturally).  Then it’s up to Ultra-Boy, a personal favorite of mine due to the novel nature of his powers: basically he has all the powers of Superboy, but he can only use one at a time.  So it is that to use his super-strength against the Super-Moby Dick, he has to turn off his invulnerability, meaning he needs a space suit to survive in the vacuum of space. 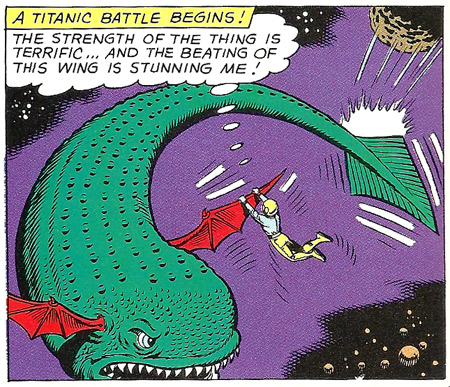 Note artist John Forte draws the creature smaller here than at the start of the story.  This is one of the many quirks of Forte’s art; objects and characters change scale constantly to suit his needs.  Here it’s a more dramatic difference than usual, as “Moby” goes from the size of an aircraft carrier to that of a crosstown bus.

When Ultra-Boy, too, fails in his solo mission, it’s time for an organized assault.  Lightning Lad claims the right of leadership based on a Legion by-law that says the member most familiar with a threat should lead the team that faces it.  But for him, it’s very much personal. 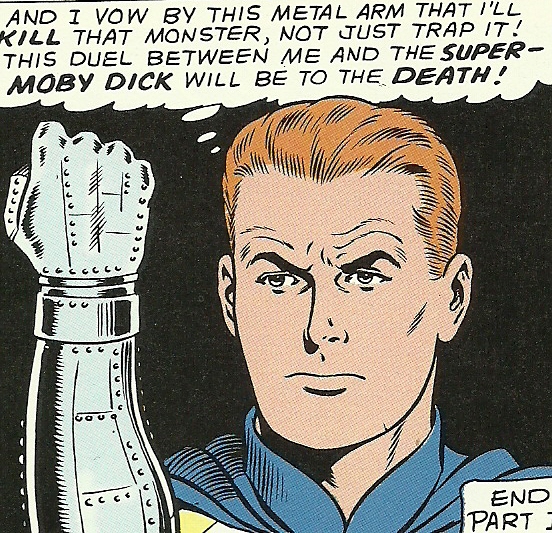 Now we veer a bit into “Caine Mutiny” territory as the Legionnaires begin to fear for Lightning Lad’s sanity, with his growing obsession turning him into a tyrant.  Pursuit of the creature takes the team to a populated asteroid where the humanoid inhabitants have mineral-based flesh, making them likely snacks for the metal-eating Super-Moby Dick.  Superboy and Colossal Boy sneak off to try their own assault on the beast, but fail at the last moment as Lightning Lad arrives to chew them out and scares off Moby with the noise of his rocketship.

Finally, the team has had enough and holds a formal meeting to remove Lightning Lad from command, but while the others meet, he sneaks off and confronts the creature alone.  The other heroes arrive just in time to see him launch a lightning-powered attack, this time with his electrical bolts greatly amplified by a device in his new metal arm.  Under this onslaught, however, the Super-Moby Dick is not killed, but instead is reduced to tiny size, and Lightning Lad reveals this was in fact his true intent.  It turns out that in an exchange neither the team nor we readers were allowed to witness, the doctor who gave LL his new arm, and who has been traveling with the team this whole time, confessed he was responsible for this whole sorry mess, having performed an experiment on a tiny ore-eating creature that increased it from harmless lizard-size into full-on Godzilla proportions. 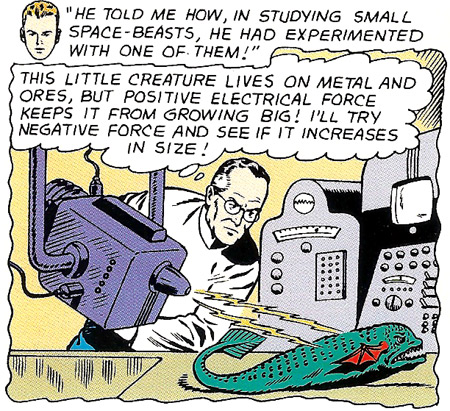 Of course, Lightning Lad couldn’t just TELL his teammates that he intended to shrink, not kill the beast, because then where would we get our drama?  In retrospect, this is probably the most interesting aspect of the whole story: the fact that the central concern is not so much the threat to life and property posed by the Super Moby Dick, and how to stop it, but rather the disturbing prospect that Lightning Lad may have lost his marbles.  This is because more than most — and arguably any — DC comics of the period, the Legion of Super-Heroes revolved around relationships, or more specifically the constant fear that relationships will be shattered; friendship ended, love lost, “that old gang of mine” broken up.  And as this example shows, generating all that angst often meant straining credulity with highly contrived and implausible plot twists.  It’s also interesting to note that the main focus of the Legion here is less “how do we get rid of this monster” than it is “how do we keep Lightning Lad from killing it?”, which strikes me as fairly progressive for the time.

Not that any of that mattered to me when I first read it.  No, what stuck with the young me was the powerful image of that reptilian, winged “whale” with the angry face, flying around and eating everything in sight (and the fact that it was drawn in Forte’s bizarre, cartoony style just made it more creepy, not less).  That, and the disturbing loss of Lightning Lad’s right arm; “not a hoax, not a dream,” this was a very real maiming of a core character, and a change to the status quo (well, at least for a couple of years, until a scientist found a way to grow the kid a new, living arm).  Interestingly, considering how unhinged it left him at first, Lightning Lad is pretty laid back about his lost arm by story’s end. 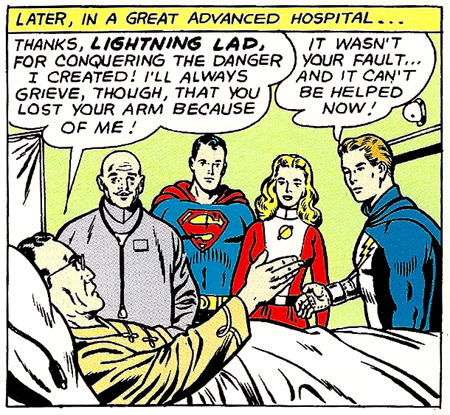 The writer for this story was Edmund Hamilton, my favorite Superman writer of the Silver Age and author of numerous great science fiction short stories and novels.  He may have been onto something, as Melville’s Moby Dick would prove highly adaptable to science fiction in general and Star Trek in particular.  In the Original Series episode “The Doomsday Machine” a haunted and deranged Starship captain loses his own ship to a mechanized space leviathan and nearly sacrifices the Enterprise, as well.  In “Obsession”, it’s Captain Kirk’s turn to play Ahab as he chases a cloud-based creature through space while his crew begins to wonder if he’s gone off his nut.  And in the film, The Wrath of Khan, the titular villain not only quotes Melville’s novel but does so in a way that suggests he understands and accepts that he’s playing the Ahab role, pursuing an obsession that will probably — and indeed eventually does — lead him to ruin.  (His last words, directed at Kirk, are a quote from the novel: “…To the last, I grapple with thee; from hell’s heart, I stab at thee; for hate’s sake, I spit my last breath at thee.” ) A generation later, on a later iteration of the Enterprise, Captain Picard’s bloodlust toward the Borg is only cooled when someone compares him to Ahab.  Realizing to his horror it’s an apt comparison, Picard quotes another passage (“And he piled upon the whale’s white hump the sum of all the rage and hate felt by his whole race. If his chest had been a cannon, he would have shot his heart upon it.“)

Obviously the epic nature of the Moby Dick tale is a perfect match for space opera, and the Legion of Super-Heroes milks it pretty thoroughly here.  All in all, it was a pretty powerful introduction to the Legion, and the probable genesis of my long-lasting fascination with the team , despite — or maybe because of — those utterly daft images of a grumpy-faced fish-lizard, flying through space on little, red bat wings.