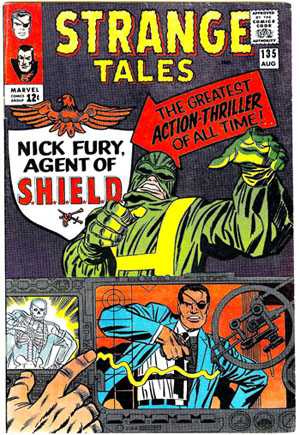 Fifty years ago this month, the world met Nick Fury, Agent of SHIELD.

Okay, so technically we’d already met Nick a couple years earlier as a tough-as-nails three-striper in “Sgt Fury and His Howling Commandos,” but that book was set in World War II; now the character was being brought into the very-60s world of high-tech espionage to cash in on the spy craze then sweeping the entertainment world.  As writer/editor Stan Lee said in his 1975 book, Son of Origins, “We were going to out-Bond Bond and out-UNCLE UNCLE.”

Certainly in the pages of a comic book, where artist Jack Kirby’s boundless imagination could churn out gadgets and vehicles and massive secret facilities free from the constraints of a TV or movie production budget, that seemed like a goal they just might achieve, even if at first blush, Fury didn’t seem the superspy type.  Where James Bond and Napoleon Solo (and an-ever mounting number of competitors) tended to be impeccably dressed, highly cultured smoothies with expensive tastes in wine, women and cars, Fury was a working-class Joe who grew up on the streets of Hell’s Kitchen and remained, in 1965, essentially the same tough-talking, cigar-smoking roughneck he’d been on the battlefields of Europe.  With his tendency to bite the “g’s” off the ends of verbs while chomping on a stogie, he seemed closer in temperament to Lee Marvin than 007, and with Kirby drawing him, he could go for months without a proper shave.

But like most everything else from Marvel in this period, it worked.  It really was time for the comic industry to get its own superspy (why hadn’t someone thought of it before?) and Lee and Kirby delivered the goods in their patented, thrill-a-minute, out-of-the-frying-pan-into-the-fire style.  One of them (probably Kirby) came up with the idea of giving Nick an eyepatch, which besides granting him an instantly recognizable “look” also added a sense of mystery and intrigue, like the guy in the Hathaway shirt ads (which may have inspired the move).  Immediately our interest is piqued: What happened to Nick during those “missing years” and how did he lose his eye? (He’d still had it as recently as Fantastic Four #21).

Strange Tales #135 opens with Fury reclining in what looks like a hi-tech bathtub, as technicians take a cast of his body and warn him not to speak or even move, as it could prove deadly (yet they still let him smoke his cigar!). Quickly he learns the purpose of the procedure: a virtual army of automated simulacrums called Life Model Decoys (or LMDs) are being created from a mold of Fury’s body to act as decoys for enemy assassins.

The LMDs will prove one of the most useful of all the gimmicks introduced in the series, as over the years Nick Fury will be “killed” in the pages of various comics, only to reappear later with the revelation that the victim was “only an LMD” (Dr Doom would pull the same gag repeatedly with his “Doombots.”)

Next up, Fury’s ushered into a sportscar filled with gadgets and weaponry to rival 007’s Aston Martin, but true to their promise to “out-Bond Bond,” Stan and Jack give this one a trick even Q can’t match. 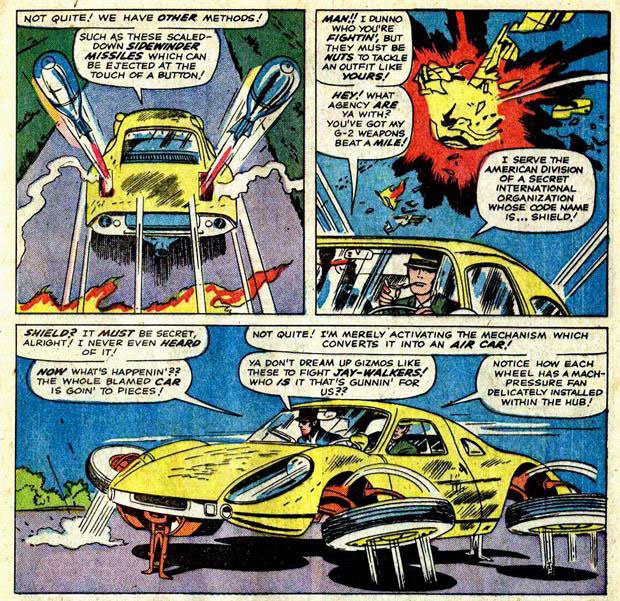 That’s right, this car can fly.  And fly it does, right up to the strip’s real show-stopper, a creation blending the superspy trifecta of gadget, vehicle and hi-tech headquarters in one massive Kirby masterpiece, the SHIELD helicarrier. 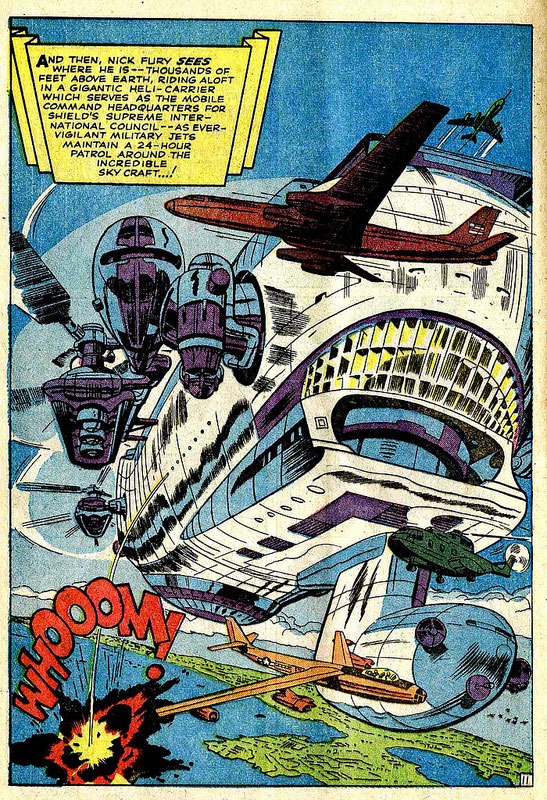 Brought before a collection of high-ranking government officials and billionaire industrialist Tony (Iron Man) Stark, Fury is presented with a proposition: sign on as director of SHIELD (Supreme Headquarters International Espionage Law-enforcement Division) and keep the world safe for democracy.  At first he demurs, but when his uncanny instinct for imminent danger, his ability to form and act on an instant plan of action and his natural command ability combine to save the assembly from a hidden bomb, everyone in the room, even Fury himself, knows SHIELD has found its leader. 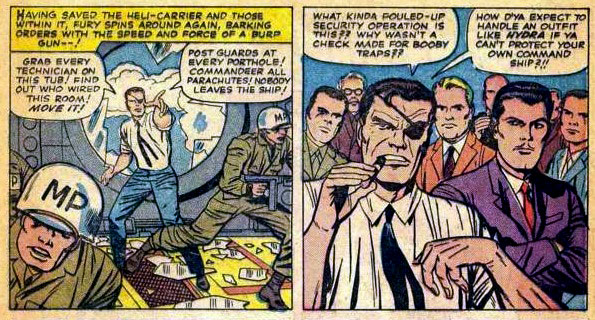 A mere 12 pages into the saga of SHIELD, a plethora of amazing creations have already been introduced, with many more in the pipeline, but ultimately the greatest invention is SHIELD itself.  With it, Marvel takes a major step forward in its efforts to weave a web that connects its full universe. With Tony Stark on board as SHIELD’s benefactor and tech provider, we have a link to Iron Man. Through Fury’s war career we have a tie to Captain America, who will operate as a quasi-agent for SHIELD as time goes on.  Over time, Nick will show up to advise, assist, irritate or harass every superhero group and loner in the Marvelverse as SHIELD extends its reach across borders and into people’s lives with “Big Brother” tactics so far-reaching and ubiquitous they make the NSA look like pikers.  Not that it isn’t handy having an omnipresent, international police force: When (I kid you not) Godzilla stomps his way into the Marvelverse the 70s, SHIELD steps in as the logical agency to deal with rampaging, giant lizards on a monthly basis.

In time, the real-life hi-jinks of the CIA and other intelligence agencies would cause us to look at espionage with a more jaded eye, and Nick would often be portrayed in a less sympathetic light, walking a thin line between all-knowing protector and Machiavellian schemer and sometimes coming down on the wrong side of that line.  I won’t even get into what his personal saga has devolved into in recent comics: Suffice to say any character strong enough to hang around for 50 years will eventually be rewarded with a hopelessly muddled continuity that sucks all the fun out of the original concept. 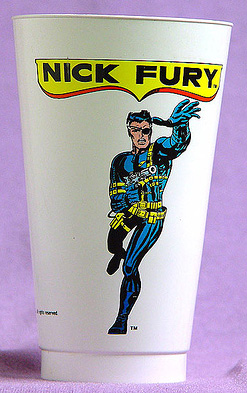 But in May of ’65, when Strange Tales #135 hit the stands, things were looking very bright for ol’ Nick.

They’d get even brighter in a few years when artist/writer Jim Steranko arrived to remake what had been essentially a plainclothes “war book” into something more sleek and stylish and “of the moment,” infusing innovative graphic design with a frequently psychadelic sensibility, and outfitting Nick in a tight-fitting tactical suit that brought him closer, visually, to his superhero brethren, thus opening the door to merchandising possibilities (Nick would eventually end up as an action figure, but when I was a kid we had to settle for a 7-11 Slurpee cup!)

Sadly, when Steranko left the strip, he took most readers with him, and Fury’s solo book was cancelled before it even hit issue 20.  But growing up in the 70s, I almost preferred it that way; Nick seemed to work better as a guest star, breezing into some other hero’s life when he was least expected, and always bringing with him excitement and intrigue.  More than once, I bought a comic I wouldn’t ordinarily have purchased (I’m looking at you, Spidey!) because I flipped through and saw Nick Fury was in town.

And why not?  Nick was always dependably Nick; timeless and dated all at once, a link to both the Swingin’ 60s and World War II, lugging around next year’s technology.  In army fatigues or a tech suit, on a halftrack or in a jetpack, battling Nazis or Hydra, he was always the same tough-talking, straight-shooting guy he’d ever been, the one constant in an ever-changing Marvelverse. 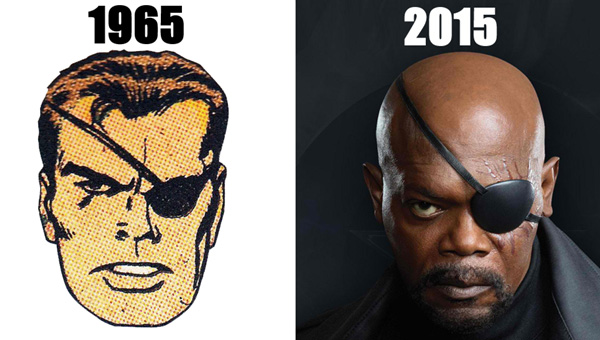 I guess sooner or later, time changes all of us.