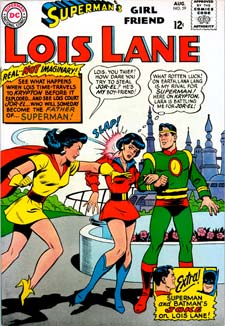 Superman’s one-time supremacy on the newsstands meant that by 1965, girl reporter Lois Lane was well-established as the first (and I think, still only) character to headline a comic by virtue of being the girlfriend of a superhero.  Given that it’s a book about a character with no super-powers — a single, working woman in the big city —  it might be tempting to consider this a feminist milestone of sorts…provided you never actually read the books.

The reality is that Superman’s Girlfriend Lois Lane was written by middle-aged white men, like all other DC comics of the era, so she’s not so much a character as a collection of, at best, comedy cliches and at worst a sort of paranoid misogyny.  One part Lucy Ricardo and one part Delilah, her endless schemes are usually portrayed the sort of “hare-brained” notions “only a woman” could come up with, but on another level she’s arguably Superman’s greatest enemy: if her plans ever succeed, she’ll destroy his career either by revealing his identity or by trapping him in…gasp…holy matrimony.  Or both.

In June of 1965 (but with an August cover date), Superman’s Girlfriend Lois Lane #59 gave the world what I consider probably the best-ever example of everything the book was about.  That is to say, it’s pretty messed up.

(NOTE: This post is lifted from my old Confessions of  A Superman site, if you’re interested in reading more of my observations on the Man of Steel in his heyday).

In the lead story, “Lois Lane’s Super-Perfect Crime,” Lois receives from friendly aliens an elixir that grants her invulnerability, making it possible, she reasons, for Superman to finally take a wife without fear that his enemies will strike at him through her (his eternal excuse for NOT wedding).   The only catch with their invulnerability formula, say the aliens, is that she’ll have to consume at least one glass of milk every day to ward off its dangerous side effects.

All that’s left now is to clue Superman in on this happy development, so Lois quickly arranges a meeting with the Man of Steel and explains the whole thing in a logical and rational manner.  Haha, just kidding!  Instead she summons him to a rocky ravine and uses dynamite to dump an avalanche of boulders on herself while Superman looks on in horror.  As he digs her out in a state of shock and grief, he’s astonished to find her hale and hearty. 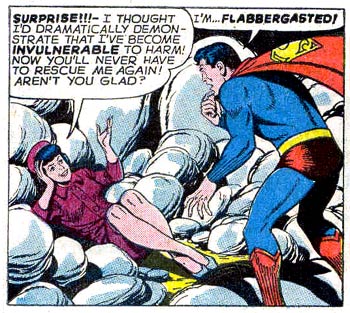 Naturally a little thing like invulnerability is handy indeed when you live a life as peril-filled as Lois Lane’s.  In fact, it’s fair to say the term “trouble magnet” was invented with this gal in mind. 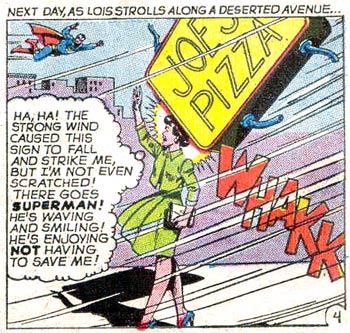 To Lois’ consternation, her newfound ability does not move Superman to immediately pop the question. Quite the contrary; when asked on a television chat show when he’ll get around to marrying, Superman answers quite frankly, “Never!” and Lois, watching the program, flips her wig. 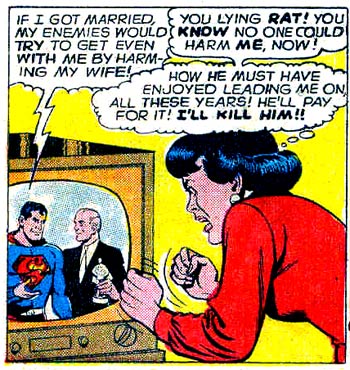 Naturally Lois assumes that “marriage” for Superman means marriage to her.  If you’re thinking this tirade is a bit over the top even for Lois, you’re right.  It seems she forgot to drink her daily glass of milk the night before, and that “side effect” the aliens alluded to is, well, insanity.  Oops.

As fate would have it, Superman picks this very day to reveal to Lois and Lana Lang the secret hiding place of a deadly Kryptonite ray gun (honestly, won’t he ever learn?) and Lois takes advantage of this opening with a plot to rid herself of both Supmern and Lana, killing the former while disguised as the latter. 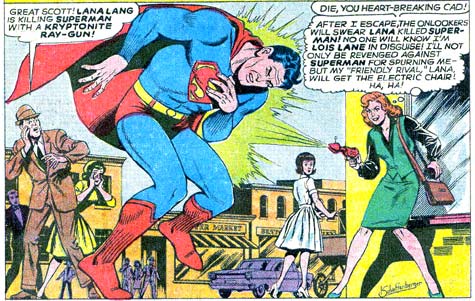 Based on eyewitness accounts and Lois’ (true) testimony that only she and Lana knew about the Kryptonite gun, Lana is convicted of Superman’s murder and months later, she’s executed in the electric chair.  All is well for Lois, until one night she finally drinks a glass of milk and comes to her senses (really, months between glasses of milk?  For shame, Lois!).  Lois does the honorable thing and confesses to her crime, but the courts rule she was insane at the time and let her go.  That’s small comfort to Lois, who’s killed her friend and her true love and has to endure the angry stares of people who know what she did.

Luckily the whole thing is revealed as an hallucination; Lois experienced a dizzy spell after drinking the invulnerability formula and imagined the rest of the story.  She quickly demands an antidote to the formula to keep her vision from coming true, and the aliens wave their farewells.

So the old “it was all a dream” ploy leaves us (and Lois) unsure of just what she might really be capable of (though the image of her murdering Superman can’t help but linger), but the second tale in this issue is less ambiguous about her character.  In “Lois Lane’s Romance With Jor-El,” the girl reporter interviews a scientist who’s drawn up plans for a massive tower that, if built, could aim a ray at the Earth’s core which would prevent the sort of atomic reactions that might explode the planet.  When Lois asks if the invention might have saved Krypton, the scientist agrees it could have, and gives Lois the plans for the tower so she can share them with Superman. “Superman, nothing!” she thinks, ” I’m going to follow this up myself!”

Borrowing an experimental time machine from Professor Potter, she travels to Krypton, careful to pick a time period where Jor-El is still young enough to actually build the tower before it’s too late.  When she arrives, Jor-El has yet to marry his steady girlfriend, Lara.  Deciding the Jor-El of this time period would scoff at claims Krypton was doomed, Lois presents the tower as a defense against alien attacks aimed at the planet’s core. 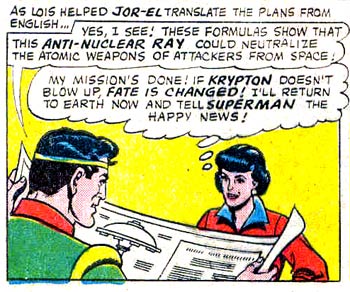 Someone might want to tell Lois that if she has just succeeded in saving Krypton, she won’t find Superman waiting for her on Earth to hear the news.  Anyway it’s a moot point since she returns to her time machine to find it non-functional, and realizes she’s stuck on Krypton.  Immediately she decides to make the best of it by stealing that hunky Jor-El away from Lara (“If I can’t have the son, then why not the father?” she thinks, doing her bestJoan Collins impersonation).

Lara offers to let Lois room with her, and is rewarded with betrayal, as most of Lois’  girlfriends eventually are. 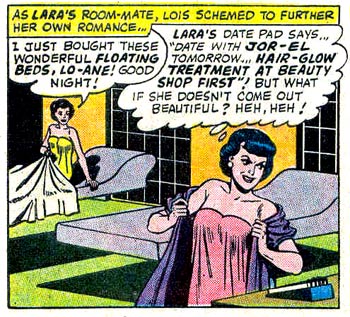 At the beauty salon, Lois tries to turn Lara’s hair green but ends up accidentally dyeing her own.  When she recovers from that boo-boo, she tries to win over Jor-El at a dance all three attend.  That too goes badly, so Lois gets even bolder, altering Lara’s datebook so she’ll miss a romantic moonlight appointment with Jor-El, then disguising herself to take Lara’s place. 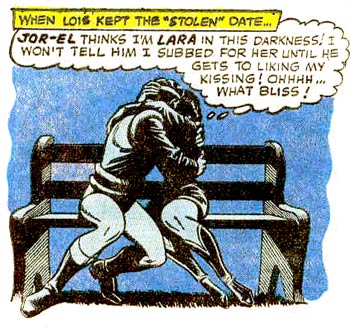 Okay, now tell me Lois isn’t a complete sicko.  Anyway Lara sure thinks so when she walks in on this scene and slaps Lois in the face.  The next day, Jor-El prepares to activate the newly-constructed planet-saving tower in a public ceremony, but the tower and the town it’s next to have mysteriously disappeared.  Only then does Lois realize the tower has been built on the outskirts of Kandor, famously shrunken and stolen by future Superman foe Brainiac.

Suddenly, getting off of Krypton has become a bit more of a priority (since nothing can stop it from blowing up now), so Lois returns to the time machine to try it out again.  Luckily the atmospheric anomaly that rendered it inoperable has been counteracted by a second weather effect and now it works again.  Lois takes her leave, but before returning to the present, she sets her dials only a few years forward, and stops at the El home to stalk a very young Kal-El. 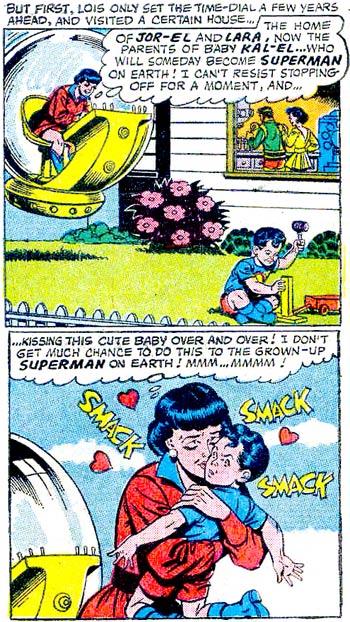 Okay, I’m pretty sure that sort of thing would get you locked up in any state in the Union.  Once the shudder of disgust passes, check out the groovy Kryptonian architecture on Jor-El’s house.  Wooden siding , neatly trimmed hedges, a white picket fence and a healthy, green lawn?  Turns out Kryptonopolis looks a lot like Mayberry, NC.

Over on his “Deck Log” blog, Commander Benson has already ably covered the third story in the book, “Superman and Batman’s Joke on Lois Lane,” but I figure it’s worth including these panels to give you the gist of Lois’ character in the tale:

Okay, so in the course of just one issue we see Lois murder Superman and frame her “friend” for the deed (albeit in a dream), try to steal Superman’s father away from his mother (at one point making out with him while disguised as someone else), snatch an unsuspecting couple’s toddler from his yard for an inappropriate display of affection and plot to marry Bruce Wayne only because she thinks he’s really Superman.  And remember, she’s supposed to be the hero of this book.

In fairness, of course, it must be noted that this sort of behavior was pretty standard for our favorite girl reporter and yet Superman always came back for more, making him what psychologists would call a “co-dependent,” every bit as messed up as Lois is.  Bruce Wayne, at least, seems to understand this, as indicated in this panel where Lois willfully misinterprets the teachings of Norman Vincent Peale: 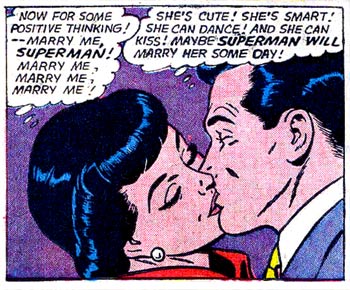 So, that’s Lois Lane in a nutshell.  Where she belongs.  Fifty years on, her name is still linked to Superman’s as half of one of fiction’s great “love stories,” but why, when she’s at best just a nuisance to him, is beyond me.