To my eye, there’s little if any difference between Marvel and DC Comics today, but in 1965 the difference was fairly pronounced.  Two books on the stands in April of that year, DC’s Superman’s Pal, Jimmy Olsen and Marvel’s Tales Of Suspense, provide a good example of what I mean.

The mere fact that DC even published a book devoted to the likes of Jimmy Olsen, a lowly “cub reporter” and goofball sidekick to Superman, is testament to the company’s then-dominance of the comics industry, albeit a dominance already beginning to erode and soon to slip irretrievably away.  Superman in 1965 was the 800-pound gorilla of the superhero crowd; having conquered television, cartoons and radio, and proving a merchandising cash cow for DC, he was featured in numerous monthly and bi-monthly comic titles plus various spin-offs, all of which sold like hotcakes, so why not a book for that hanger-on Jimmy as well?

Meanwhile, just down the street, rival Marvel Comics was making waves with its stable of unconventional, even oddball superheroes.  By 1965 the “House of Ideas” was at the crest of a four-year hot streak where almost every new character and concept it introduced met with success.  And yet during those early years, Marvel’s line of books was decidedly smaller than DC’s, in part because of an odd arrangement where DC actually controlled the distribution of Marvel comics.  So it was that while a mere sidekick like Jimmy Olsen rated his own book at “too big to fail” DC, Marvel A-listers Captain America and Iron Man had to share space in a single title, Tales of Suspense, itself a leftover from the “sci-fi/horror” period that preceded the superhero revival.

Jimmy Olsen #85 features three stories, starting with “Love Me, Love My Beast,” in which a beautiful girl from outer space lands in Metropolis and takes a fancy to Jimmy.  Unfortunately, so does her “pet,” Gnor, a huge, shaggy creature led around by the girl (Shara) on a leash. 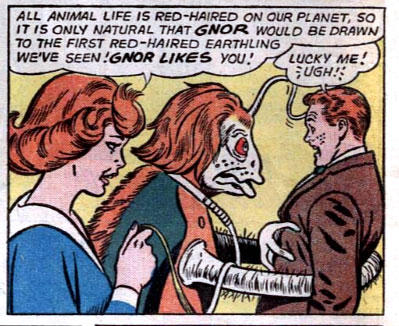 Jimmy is chosen to be Shara’s guide and companion on Earth, which suits him fine until he realizes that wherever Shara goes, Gnor goes, too. Though creepy (and one suspects, smelly), Gnor has the seemingly magical ability to make “wishes” come true, which leads to all sorts of “funny” mishaps.

Eventually, Jimmy’s sort-of girlfriend Lucy Lane goes to warn Shara to keep her hands off “her man,” but finds Shara near death in her spaceship.  Fading fast, Shara admits she is not a real girl but an android, and that Gnor is draining her life energy from her via the “leash” around his neck.  Since Shara’s nearly out of energy, Jimmy’s been selected as Gnor’s next “owner”/victim…and he’s already holding the leash.  Of course Jimmy’s the last one to figure this all out, so Lucy Lane and Superman work together to get him off the hook.  Disguising himself as crackpot inventor Professor Potter, Superman “accidentally” exposes Jimmy to an “age accelerator” that leaves him aged and nearly without energy, so Gnor instinctively transfers his “leash” to the most energy-filled person in the room, Superman.  This turns out to be a bad move, as Superman has too much energy, and, unable to handle the super-transfusion Gnort blows up.

Note that this outcome was Superman’s intent all along, reminding us once again that Superman never, ever kills…except when he does.  I still haven’t figured out why they made Shara an android, though.  I can only imagine that an editor somewhere thought it would be too traumatizing to kids if a real, live girl were to die in the story, but if she’s really just an android, then who cares if her energy is almost gone?  All she has to do is recharge her batteries and everyone’s happy, right?

Story number two is “The Adventures of Chameleon-Head Olsen,” which I reviewed in detail on my old Superman site.  Here’s the gist: Jimmy is given a potion that allows him use the shape-changing powers of Chameleon Boy, but he only manages to drink enough to change his head.  If that concept sounds funny to you, you’re the target audience of writer Jerry Siegel, who seems determined to single-handedly bring back Vaudeville with his ham-fisted puns and dopey sight gags. 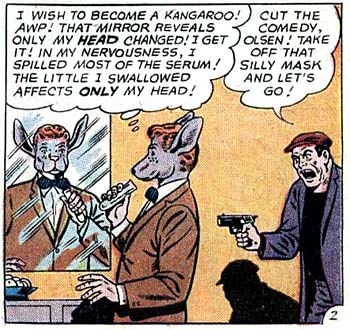 Finally, in “King Olsen’s Private Island,”  Jimmy saves the life of an eccentric sea captain who’s discovered a new, if tiny, island and has had himself declared its ruler/owner.  When the captain is later lost at sea, Jimmy is named in the will as the island’s new owner.  In the Daily Planet helicopter, Jimmy takes Lois, Lucy and Perry White with him to check the place out, and finds, among other things, an underground treasure room full of golden artifacts. Based on this sudden change in social status, Jimmy declares himself king of the island and orders everyone else to leave.

When Lois and Lucy return a few days later expecting Jimmy to have come to his senses, they find the opposite is true. 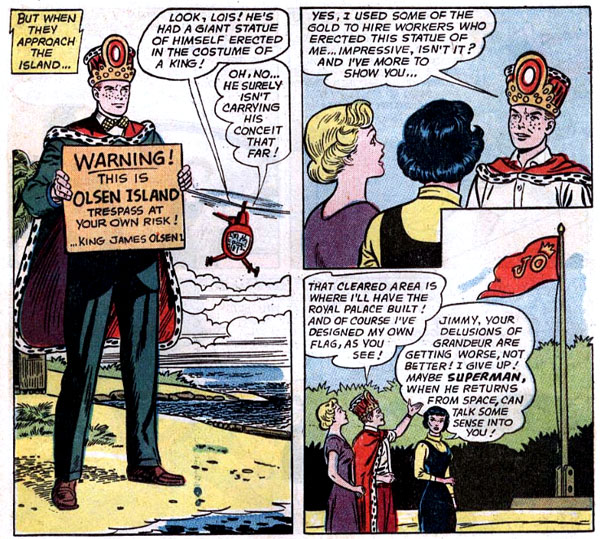 Superman returns from a mission in space and tries to talk some sense into Jimmy, but his “pal” forbids him to set foot on the island, launching kryptonite at him with a catapult.  Around this time, the “dead” sea captain emerges from the ocean and reveals himself to be a space alien.  It turns out he only pretended to be a human sea captain so he could “will” the island to Jimmy, knowing Superman would eventually come to visit and thus fall into a trap: One of the golden artifacts in the island’s subterranean treasure room is made from Gold Kryptonite, which will take away Superman’s powers forever.  Luckily, Jimmy noticed the object weighed far too much to be made of Earthly gold and, based on that one clue, figured out the whole convoluted plot.  So he only acted like a jerk as part of his master plan to save his pal.

So, to recap:  Jimmy alienated all his friends so they would tell Superman he was being a jerk, so Superman would come to the island, so Jimmy could launch a bunch of kryptonite rocks, which Superman would be sure to verify the atomic structure of using his super vision. And of course Superman would decide to inspect the ONE rock that Jimmy wrote a message on.  A microscopic message. Written with…um…a microscopic Sharpie?  Or something.  Because all of that makes more sense than simply going back to Metropolis and meeting Superman when he returns to Earth and checks in at the Daily Planet…which is the first thing he does, by the way…and saying, “Hey, Superman, don’t go to that new island, because there’s gold kryptonite there.”  Okay…

So anyway, that’s what’s happening at DC this month in 1965.  Meanwhile, over in Tales of Suspense #67, Captain America rates a mere 8 pages to Jimmy’s 24, and is relegated to the back of the book, surrendering the front spot, and 60% of the cover, to Iron Man.  We join the Sentinel of Liberty mid-way through a three-part tale revealing the origin of Nazi super-villain the Red Skull.  Page one throws us into the middle of the action as Cap trains with a crack team of Nazi agents in preparation for a top secret mission. 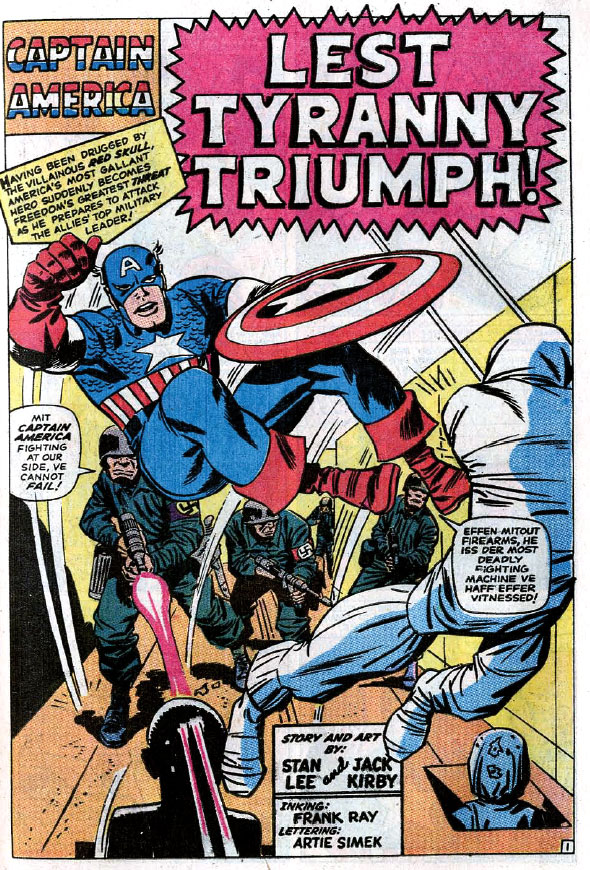 That’s right, I said trains with Nazis. At the end of the previous chapter, Cap was brainwashed by the Red Skull to serve the Axis powers.  Now he’s conducting a practice run for the assassination of a high-ranking American military official.  Oh, Cap, say it ain’t so!

Meanwhile, Cap’s sidekick Bucky is stuck in a P.O.W. camp, where the Nazis have obligingly let him keep on his costume and mask but otherwise are making life miserable, as Nazis will do.  Bucky and his fellow prisoners are dragged out before a firing squad but find it’s just psychological warfare, as the Germans have loaded their rifles with blanks.  You know, just to keep everyone in a state of terror and hopelessness.  Except Bucky’s no dummy, and realizes that if the Germans’ guns aren’t loaded, they’ll be…well… a lot easier to beat (Oops.  “You said this plan was foolproof!  Shultz, you dumkopf!”)

Bucky may not get the press Robin does, but he proves why he’s comics’ baddest sidekick by pulling no punches.  Batarang, nothin’. Here, have a hand grenade!

Tickled with his triumph over Captain America, the Red Skull takes the brainwashed hero to meet Der Fuhrer himself.  In a neat sequence, Lee and Kirby show Hitler as a sniveling coward, intimidated by his own lacky the Red Skull and mortally terrified of Cap.  When he tries to slip in a sucker punch, we get proof positive that Cap can beat Hitler even in his sleep. 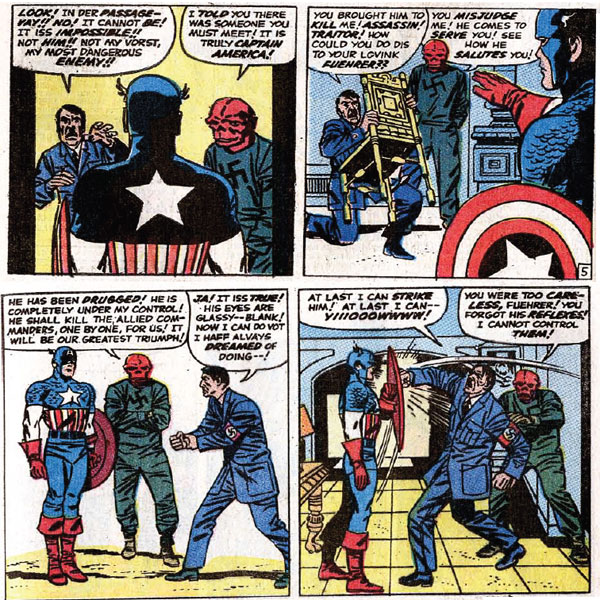 Cap and the Nazis parachute to their mission of murder.  At the last minute, Cap’s willpower keeps him from killing his assigned victim, but the Nazis force him to follow through.  Or do they?  We’ll have to tune in next month to know for sure.

So to recap; 24 pages of fake-outs and vaudeville gags with Jimmy Olsen versus 8 pages of non-stop action and mayhem with Cap.  Both books feature “out of character” behavior as a plot hook, but Jimmy’s just pretending to be a jerk as part of a complex hoax, leading the reader to wonder merely (if they care at all), “gee, why is he being such a jerk THIS month?” whereas Cap has been brainwashed into betraying his core beliefs, missing a chance to wring Hitler’s neck and…perhaps…committing a traitorous act of murder.  Only one approach generates suspense.

Granted, in 1965 DC was putting out more creative plots and stylish artwork in books like Green Lantern and the Flash, but in a way I think it’s more revealing to compare what the companies were doing in these “lower tier” books.  DC is happy to stick with formula and tradition, churning out stories that could just as easily have appeared ten years earlier (indeed, there is the distinct feeling that Jimmy Olsen is routinely assembled using “inventory” material of indeterminate age), while Marvel is more “in the moment” and improvisational, adopting the old Hertz slogan of “We’re number 2 so we try harder.”  As a result, both Cap and Iron Man will eventually spin out of Tales of Suspense into their own solo books, while Jimmy’s sales will slide steadily downhill until, in 1970, he gets a major revamp courtesy of, ironically, Jack Kirby.  Not that this will help much, either.

Anyway, that’s what was on the stands in April ’65, the year I made my debut on planet Earth.  Obviously my comic reading days were still a few years away at this point, but I suspect if I’d been able to plunk down 12 cents on one of these books, it would’ve been Jimmy Olsen, in spite of everything.  I was a square from Day One.